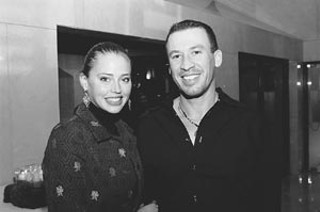 BAUBLES, BANGLES, AND BOTOX Sorry -- I couldn't resist a cheap joke. But last week's opening of the new Anthony Nak jewelry store downtown at 800 Brazos was no joke at all. Their signature look of delicate gold mesh coupled with chunky stones such as emerald, rose quartz, and citrine is exquisite, presenting a look that is romantic, sophisticated, and drop-dead gorgeous. The store, designed by the venerable MJ Neil, who also designed Anthony Camargo and David Nakard Armstrong's home (at which there was a private afterparty), is spare and beautiful and perfectly achieves its goal of showing off the jewels in a glamorous but unobtrusive setting. Catered by Word of Mouth, the party itself was a fabulous success, with much of the local glitterati in attendance, as well as actress/model Estella Warren, who has several new films in production. It was a very good-looking, well-dressed, well-groomed, line-free group enjoying themselves in a swank setting while admiring fabulous jewels. AN had every reason to be proud. "Austin is the chicest city in the country right now, and we are proving that it can be a serious force in design," said Camargo. This is also no joke. One attendee at an affair AN held at its old showroom said, "I laughed at the prices of their jewelry and thought, 'Who is going to buy jewelry at this price in Austin?' Then the limousines started arriving in droves." Hence the new location, which is also a great vote of confidence in the revitalization of downtown as a shopping destination. Austin is a haven away from Hollywood for many stars, and its burgeoning style scene presents an impressive range of offerings that are uniquely Austin. The international attention AN brings to Austin is good for everyone and opens opportunities for design of all varieties to capitalize on it.

WHITE NIGHTS Tuesday night brought the opening of Oslo, the brightest new star in the firmament of clubs, occupying the formerly run-down District space. The makeover is amazing. The interiors are by Joel Mozersky, who continues his love affair with the Seventies. I know what that sounds like -- don't shudder -- Mozersky has excellent taste without a bit of kitsch, selecting a sleek all-white scheme with chairs that are floating Lucite orbs suspended from the ceiling, egg chairs, tables, vinyl snakeskin flooring, and white rubber for the walls and benches. It's like Abba meets the Jetsons on the Côte d'Azur in 1971, but in a good way. "Very Halston and Gucci," says Mozersky. I hung with Mark Ashby as well as a number of the usual suspects too fabulous to mention.

OTHER SOCIAL EXCURSIONS The first Club Red event happened last Sunday at Crimson, the chic Colorado Street restaurant in the warehouse district. As a benefit for AIDS Services of Austin, Club Red hopes to be a semiannual occurrence, attracting a younger crowd into the nonprofit arena. With a tea-dance format and silent auction, it drew a respectable number of guests, and will possibly be scheduled every two months... I also attended Kat Jones' birthday party (she of Milkshake Media) and was happy to join with other Kat Jones Fan Club members in paying homage to her... And spent an intimate little evening at the lovely Hyde Park home of my NBF (Next Best Friend) writer Mark Sullivan, along with Cindy Morgan. Sigh -- with the social season hurtling into the holidays, it's a wonder I have time to sit down and write this.

NOT JUST SHOES Friday, Nov. 14, Vën Shoe Salon unveils its transformation into Vën Accessories. Owners James Rowley and Gustavo La Grave are expanding their horizons by adding handbags, scarves, and a variety of other accessories to their wonderful shoe selection that includes Michael Kors and Pancaldi. But the coolest addition is the shoe collection designed by Gustavo and manufactured in Spain. See for yourself at their Davenport Village location.

TV TALK Spending about one afternoon a week at home, I've been turning on the television again -- a rare occurrence for me. But I love the lineup of Classmates, Ambush Makeover, and Judge Judy. Classmates is a televised offshoot of Classmates.com in which they arrange for former classmates (or other friends and family members) to reunite after extended absences. I love the part when someone gets to confront a classmate who tormented them in school, or the segments that bring estranged family members together. Classmates is wonderful, but what really brings tears to my eyes is Ambush Makeover. The premise of selecting some poor needy soul off the street and redoing their look with new clothes, hair, and make-up is the noblest of pursuits. The sheer magnanimity of the gesture is so overwhelming, I can hardly sit through it without weeping. It is a part of the makeover madness that has swept America -- an excellent trend, as far as I'm concerned, and one that should become more widespread. And Judge Judy? Well, she speaks for herself. She is a goddess.

Write to our Style Avatar with your related events, news, and hautey bits: style@austinchronicle.com