Got a fetish for fashion? Read the verdict on Austin's latest fetish fashion show. (Hint: Stephen seems to have kept his whip sheathed!!!) 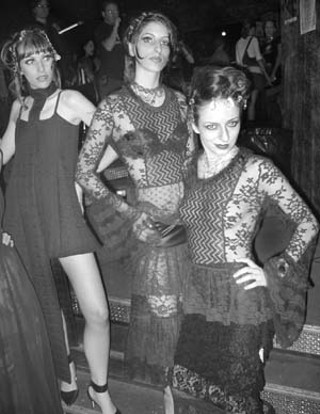 Ainjel, Samera, and Heather at Elysium

CATWALKING I didn't even want to go to the damn show -- it was in a nightclub (you know I loathe fashion shows in nightclubs!) -- and it wasn't scheduled to start until 11pm (which meant it might start at midnight). But old friend Neil Diaz nagged me until I agreed. After a lengthy drama involving taxis that never appeared, I arrived at 11:15 and was embarrassed to find that the producers were holding the show for me, and it started moments after I arrived. I was nervous about the belly dancers, stilt-walkers, and other assorted activity that was promised -- as you also know, my feeling about all this hoopla is that it distracts from the basic reason for the show, which is to show fashion. First up was Jennifer McCarty's designs for Sacred Heart Rubber (www.sacredheartrubber.com). Having seen her work in several other shows, I was struck by the vast improvement. Fetish design is not exactly my cup of tea, but the tenets of good design, construction, and styling are universal, and the quality of Jennifer's work in a difficult medium has shown her to be sleekly professional and determined. Next was Summer Lawson (Siren Summer) for Sub Kult Klothing. Summer has such a natural eye for style and an incredible vision of beauty. Her models -- including the lovely Chrysta Bell, Samera, Ainjel, and Heather -- were exquisite, with jewels dripping from their elaborate hair done by Jen and Rawny of Topaz. But the clothes ... omigod, the clothes were faaabulous, gorgeous, period-inspired pieces infused with drama and romance. Miss Lawson could use a bit of technical help -- she has virtually no professional training, yet tackles some very difficult techniques -- but her design work is magnificent. Her black lace dresses were beautifully reminiscent of Chanel in the Thirties, the green suit with lace was stunning, and the burgundy-and-black shot-silk ball gown was breathtakingly dazzling. If Gail Chovan is the grande dame of fashion design in Austin, then Summer Lawson is surely the princess royal. Last up was Rene Geneva's collection for Faernyn's Grove (www.faernynsgrove.com). As suspected, it was hard to pay attention to the clothing, even though Ms. Geneva's production was amazing. With Cirque du Soleil-ish elements, there were stilt-walkers (including the designer herself), a belly dancer, flag poi, and a trio of hand-balancers, all of whom did great work. But the segments ran very long, and the clothing took a backseat. Fortunately, Shane Madden of Govinda provided the soundtrack -- he is an excellent and uniquely talented violinist, and his work added magic to the performance. New to Austin, Ms. Geneva is preparing herself to make a big splash in our stylish little scene. Her work is good, but I urge her to expand her range to include something other than stretch PVC and vinyl -- those are done, done, done, and the amount of work she puts into her designs would be better served by something less pedestrian. But overall, the entire show was much better than I expected from another in a series of alt/Goth/fetish shows, which, here in Austin, can have a numbing sameness to them.

CAREENING INTO 50 As a teenager, I never thought I'd live to be 46, imagining that life would be all about work and various other inconveniences that would interfere with my ability to dress up, stay out all night, and sleep all day. Indeed, at 46, life is about work and various other inconveniences -- but the allure of staying up all night in some smoky cesspool of a nightclub in an indescribable outfit has faded. And so I turned 46 last Saturday surrounded by my coterie of some of my best friends, and I had to admit that life was pretty good, even if I was careening headlong into 50. We had a fabulous dinner at Asti, under the watchful eyes of owner Emmett Fox, who insured that the food was perfect and the occasion was memorable. The gifts were fabulous, of course, and my guests included Mark Ashby of Ashby-Ames Interiors, Joel Mozersky of One Eleven Designs, Rita Garza of the American Heart Association, Gail Chovan of Blackmail, Evan Voyles of the Neon Jungle, Kat Jones of Milkshake Media, prominent gerontologist Steven Aichlmayr (at my age, I need a gerontologist in my life!), the hospitable Chris Rodriguez of Embassy Suites, event promoter Neil Diaz, extraordinary graphic designer Jennifer Braham, James Walker of TKO Media, and my precious sister Margaret Moser, who gives such meaning to my life and without whom none of this would have been possible.