Join Stephen on his adventures with Buh-buh-buh-buh-Bing's widow, some cuties at Club DeVille, and the scene at Factory People, Austin's latest grab at its allocated 15 minutes. 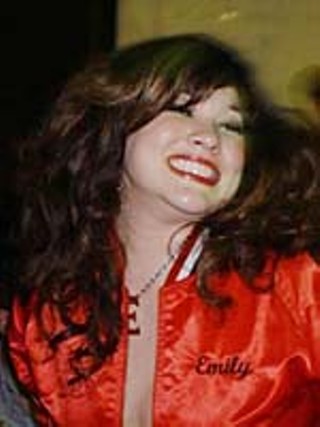 Queen Emily of the Club DeVille show reveling in her night of glory. (Photo By Stephen MacMillan Moser)

THE CATWALK It was hard to tell whether the energy was lower in the audience or onstage, but the Club DeVille Fall Fashion Show was not without its moments -- several provided by Blue Velvet, who, with a horror-movie theme, presented fabulous vignettes of Bette Davis and Joan Crawford in What Ever Happened to Baby Jane? and a wonderful tribute to Carrie. There were terrific clothes from Shiki, Therapy, and Blackmail; Legs Diamond presented its usual mayhem; Flipnotics was fun and cool (as usual); and Upstairs showed off their beautiful men's shirts in the second half. My presence at the end of the runway often elicits attention from the stage -- this time by a male model who unzipped his pants and shoved a cucumber in my face and another who grabbed my head and licked my forehead. But the real compliment came from a handsome gentleman named Ian who told me, "I've been reading your column for about three years, and you always encourage people to come to this show. I decided to take your advice this time, and I'm glad I did. The show is so much fun and showed clothes I actually might want to wear. ... I'm from New York and used to a very different kind of show."

HIGH SOCIETY I loved hanging with Kathryn Crosby, last wife of Bing Crosby (married from 1957 until his death in 1977), at a very swank little soiree at the fabulous home of Robert and Marcy Garriott. Robert, handsome and affable in a young Richard Crenna sort of way, is a co-founder of the wildly successful Origin Systems and new company Destination Games as well as multiple other projects. Marcy, an award-winning filmmaker for her own nonprofit company, La Sonrisa Productions, proudly showed off her home production studio. She is incredibly gracious and lovely -- and a skilled hostess. Guests included Austin Film Society movers and shakers Rebecca Campbell, Chale Nafus, Wendy Anderson, Robert Walker, Gregory Collins, and my boss, Louis Black, and his effervescent wife Anne Lewis. I spent a good bit of time with the delightful Katy Gaffney (see her Web site www.doggieworks.com for all your pets' jewelry needs) and with Mrs. Crosby's lifelong friend Beth Weems Pirtle (Ms. Texas Senior 2003), both from West Columbia, Texas, where they grew up. Mrs. Crosby was completely genuine and totally enchanting, making the rounds with My Last Years With Bing, her third book about Der Bingle. Completely engaging and doll-like, she mischievously whispered in my ear, "There's a fourth in the works, but a lot more people will have to die before it can be printed."

RETAIL REDUX The opening party for Factory People (1325 S. Congress) was very stylish, working toward capturing the feeling of Andy Warhol's Factory with a sleek yet unfinished look, silver balloons, live music, and the visage of Edie Sedgwick appearing regularly on merchandise. The store looks wonderful -- and even more amazing if you knew what the old Just Guns place looked like previously. Spacious and dramatic, Factory People carries extremely trendy styles in an atmosphere that urges you to relax and stay awhile, enjoying the pond, outdoor balcony, and the merchandise. Hors d'oeuvres were provided by 2 Dine 4, one of the finest caterers in a city brimming with good caterers. Also in a city brimming with independent retailers, Factory People's owner Le Popov has her work cut out for her -- the prices are a bit high for the SoCo strip, but the merchandise is unusual, and some of it is fabulous, like the white jersey dress sewn with shells on the bodice and splashed with red dye. The store is a welcome addition to SoCo, and though their press release was a little off-putting in its high-handed approach, they will most likely settle in well enough to make themselves a serious presence in Austin's exploding retail scene.