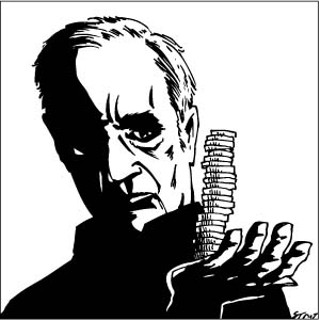 April 10, 1952. From the transcript of the House Un-American Activities Committee.

Mr. Tavenner [HUAC chief counsel]: "Mr. Kazan, you testified before this committee on January 14, 1952, in an executive session, did you not?"

Tavenner: "In that hearing, you testified fully regarding your own membership in the Communist Party approximately 17 years ago ... did you not?"

Kazan: "That is correct."

Tavenner: "However, you declined at that time to give the committee any information relating to the activities of others or to identify others associated with you in your activities in the Communist Party?"

Tavenner: "But you declined at the time to name all of them?"

Kazan: "That is correct. I want to make a full and complete statement. I want to tell you everything I know about it."

Tavenner: "Now I understand that you have voluntarily requested the committee to reopen your hearing, and to give you an opportunity to explain fully the participation of others known to you at the time to have been members of the Communist Party."

Kazan: "That is correct."

Then Kazan read a long and detailed statement in which he named 22 people. What would that mean for those 22 people? First, public scrutiny on every imaginable level (Kazan's statement was released to the newspapers the day after his testimony). Some would instantly lose their jobs, most would be socially ostracized in the climate of fear that ruled that era (and their children would suffer at school, as was all too common then). All would be investigated by HUAC and by J. Edgar Hoover's FBI. Most would be called before the committee, with the demand that they, in turn, name names. If they didn't, they could face imprisonment; at the least, they would not be permitted to work again in their chosen professions (the stage and the screen).

The day after Kazan testified, 20th Century Fox rewarded him with a contract for half a million dollars (the equivalent of roughly 3.5 million now). It was reportedly less than he would have received if he'd testified completely at his first hearing, but it was lots more than he was going to make if he didn't name names at his second "voluntarily requested" hearing. One of the people Kazan named was Tony Kraber, who said, when he was called before HUAC as a result of Kazan's action: "Is this the Kazan that signed the contract for $500,000 the day after he gave his names to this committee? Would you sell your brothers for $500,000?"

Another person Kazan named was an actress named Phoebe Brand, adding in his testimony: "I was instrumental in bringing her into the party." Pause at that. Sometime between 1934 and 1936 (the years of Kazan's party membership) he sucked in Phoebe Brand. Given Kazan's admission, in his autobiography, of "womanizing" (his word) with nearly every female he came in contact with, she may even have been one of his girlfriends. Be that as it may, the fact remains that he coaxed someone into the party whom he later sold out. There are betrayals and there are betrayals, and by any standard that must be the lowest.

His statement covered his reason for leaving the party: "The last straw came when I was invited to go through a typical Communist scene of crawling and apologizing and admitting the error of my ways." Surely the word "irony" applies, since that is precisely what he was now doing with his testimony. It applies, too, later in the statement, where he testifies of his parting from the party: "I had had enough of police-state living and I did not like it. Instead of working honestly for the good of the American people, I had found that I was being used to put power into the hands of people for whom, individually and as a group, I felt nothing but contempt, and for whose standard of conduct I felt a genuine horror." Which precisely defines his relationship to the committee.

After reading his statement, the committee thanked him and said that he may be recalled "for the purpose of asking you to make further explanations of some of the matters contained in your statement." Kazan replied, "I will be glad to do anything to help -- anything you consider necessary or valuable." Anything.

Years later he justified his testimony this way: "I said I'd hated the Communists for many years and didn't feel right about giving up my career to defend them." Of course, at his first testimony naming 22 people didn't "feel right"; he ratted on his former friends only after the powers-that-be in Hollywood told him he'd lose his career if he didn't fold. Many years later he doubted: "What I'd done was correct. But was it right?" Later still, in an interview with Jeff Young, Kazan said: "Anybody who informs on other people is doing something disturbing and disgusting. It doesn't sit well on anyone's conscience." But by then Elia Kazan had had his career; his self-disgust could not give a second chance to the careers of those he ruined.

Elia Kazan, who died this Sept. 29 at the age of 94, was by any standard an important American artist. A founder of the Actors Studio, his stagework has been the primary influence on America's actors for over half a century. Some of his films are as entertaining as they are overrated -- On the Waterfront and Viva Zapata! bear about as much relationship to the truth of their subjects as The Wizard of Oz. But A Streetcar Named Desire, East of Eden, A Face in the Crowd, Man on a Tightrope, and Splendor in the Grass are superb films. Which makes his sin, as a man and as an artist, all the greater. It was a terrible blow to the integrity of America's art, that one of our greatest artists had neither courage nor integrity enough to stand his ground.

What have we to offer posterity but our courage and integrity? All of us sin, all of us make mistakes, and passion makes fools and liars of us all sooner or later -- fools and liars and worse. The personal life is messy, muddy, even bloody. I'm afraid there's no sin I've depicted in my novels and scripts that hasn't a parallel in my life. But that's the point, isn't it? Kazan continued to make films and to direct plays about integrity, but he betrayed all claim to integrity in his life. When you see his films you see people risking all for their integrity -- Brando in Waterfront and Zapata, Patricia Neal in A Face in the Crowd, Fredric March in Man on a Tightrope. How dismaying, how enervating (which means, in my Oxford, "to deprive of vigor"), when you learn that the life of Elia Kazan bears no relation to the ideals he filmed. You can still enjoy his films, even learn from them, but you know he was lying -- not about the ideals, but about himself. You know he doesn't stand where his characters stand. Which leaves a hole in the center of his work that nothing can fill -- or, rather, that is filled with nothingness, with cravenness, with cowardice.

It isn't a matter of forgiving Kazan. All souls need forgiveness, sooner or later, for public or private sin. If one had to deserve forgiveness, that would hardly be forgiveness; forgiveness is forgiveness precisely to the extent that we don't deserve it. That's what makes forgiveness necessary and needed. We can't give it to ourselves; it must be bestowed. It is only curative when undeserved. So, yes, forgive Kazan. I was never a Communist, but I forgive him in the name of my dead Commie mother -- who didn't rat or sell out, and who paid a terrible price for that, and her children paid it alongside her. In the name of Clelia Rosalie Scandurra Ventura, I forgive Elia Kazan from the depths of my heart, for fear is a human thing, we all fear, and those who succumb to fear are to be pitied and forgiven. Forgive him. But don't excuse him. Don't apologize for him. Because excuses and apologies only make it that much easier for the next rat.

Forgive me my sins as I forgive those who sin against me. But don't make excuses for me. Don't apologize for me. Kazan was a rat. May he be forgiven. But may his deeds be remembered.