Meow? Meeee-oooooowww? Where is Miss Kitty??? And is Stephen going all punk rock on us? 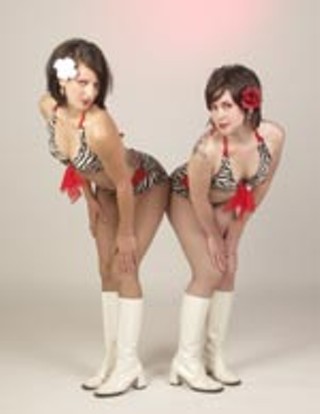 ALLEY-CATTING My good friend Barbara Chisholm, actress/writer/mother and genuine bon vivante, once told me that she thought Beerland was the best club name in town. After last Saturday night, I am also inclined to sing praises, not only to the very apt name, but to the club itself. I hadn't meant to go out at all, but, as usual, a visit to my sister Margaret can portend many surprises. Never one to miss an opportunity to go out with my sister when she's wearing high heels (generally she wants to wear what she calls her "dress flip-flops," a distinct contradiction of terms), I joined her for dinner at Opal Divine's. Things started off innocuously enough with a pint of Harp ... and then we had another one. First we met briefly with "TCB" columnist Chris Gray, who was on his way to work the downtown scene. We were soon joined by Margaret's old friend Richard Dorsett, whom she's known since the early days of Inner Sanctum Records -- almost three decades ago. With the gregarious Mr. Dorsett at our table, the Harps became more prevalent, as did the gossip and jokes. Dorsett was on his way to Beerland to see the Sons of Hercules perform and, with Margaret in her cups, we decided to join him. None of it particularly seemed of interest to me, but as I'm always open for a new experience (not to mention seeing my sister drunk), the evening unfolded rapidly. We arrived at Beerland, and the real fun began. Owners Randall and Donya Stockton were so diplomatic, they could easily be ambassadors. The Harps rapidly multiplied into many, many Harps, and I became smitten with Beerland's Boom Chica Boom Go-Go Gals, featuring (former-Chronicle intern) Aubrey Edwards and Beth Schindler. In their hot pants, halters, and white go-go boots, topped off with Ronettes-style hair, they were a sight to behold under the strobe lights, shimmying and shaking and doing the Jerk, Monkey, and the Twist to an array of pop songs. DJ Mike Mariconda kept the action happening with classics such as "Shimmy Shimmy Ko Ko Bop." It was such an evocative combination: Suddenly it was 1965, and my sister and I were watching Hullabaloo and Shindig with rapt attention. The girls were amazing -- just one more reason to go to Beerland. Then Sons of Hercules took to the stage and the crowd went wild. The mile-high lead singer and veteran performer Frank Pugliese cut such an elegant figure on stage with his stylish post-punk look. With his mic stand adjusted until the microphone pointed down at him, he kept his cigarette heavenward and cranked out a searing set of original music combined with hits such as the Yardbirds' "Heart Full of Soul," and "Happy" by the Rolling Stones, before announcing that they had to call it a night because he had to attend mass in the morning. The Go-Go Gals performed again, to my delight, and we had a great time visiting with Brenna from Wet Salon and Wendy WWAD "What Would Ace Do?," the women behind the "Best of Austin" Critics Pick-winning Rank and Revue (www.rankandrevue.com) newspaper/zine. Brenna revealed to me that I had inadvertently inspired the creation of the rag by not mentioning that she had done a good bit of the make-up at the last St. Thomas benefit at the Four Seasons. Saying to a friend, "I should just start my own magazine," the sentiment became a reality, and Rank and Revue was born. Sorry for the omission, Brenna, but the result is wonderful. With Chris Gray rejoining us, we went over to see our friend John at Elysium and congratulate him on winning a "Best of Austin" Readers Poll award for "Best Dance Club." Perhaps we should have also given him an award as "Always an Exceptional Host," as the place was rockin' and proved exactly why his club is so adored. Having not gone out like that with my sister in over 20 years, I had a blast. The whole night was fabulous -- and noteworthy ... because I actually remember some of it.

THE BIG MEOW The once-wonderful Mega 93 continues its slide into mediocrity, having first transformed itself into yet another total hip-hop station, Hot 93.3, and then firing my dear friend Miss Kitty. Miss Kitty made the original station happen, and once upon a time, Mega had real magic, playing wonderful dance music and spanning a cross-section of listeners whose interest in music was being ignored by every other station in town. And Miss Kitty was the star of it all, engendering a devoted following from swank socialites to the far corners of the lowliest strip mall. One couldn't say "Mega" without mentioning her name, and her dazzling public persona sold that station, even when they introduced a more Top 40 format and totally alienated their core group of loyal listeners. Miss Kitty, however, proved her adaptability as the station introduced more hip-hop. Unfortunately, this move ultimately confirmed that it is indeed possible to hear too much Eminem and Nelly. Tirelessly promoting the station despite this, Miss Kitty was an effervescent presence and knew to not underestimate her listeners, presenting them with a wide assortment of information on local events and charities such as the Humane Society and AIDS Services of Austin. Evidently that meant nothing to the station management, and Miss Kitty is now history. To her previous employer's credit, they are helping her land another position, and we can look forward to hearing her famous meow on the airwaves again soon.