It was a "Mighty Real" period in at least one young man's life: Oh, those heady disco nights! Oh, the power! The Passion! The psychedelics! Oh, it's all within reach through the grace of MP3s! Oh, I should have saved them! 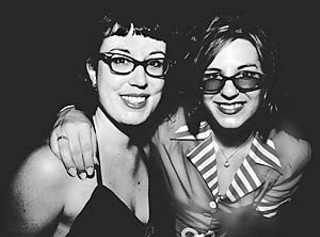 AVERAGE JO'S Throwing a fashion show using just the average Joe instead of real models can be a dicey proposition. The success of such a show is dependent on the level of pretense involved. But when the extremely unpretentious Jo's Coffee, a true social hub on the chic SoCo strip, threw their Average Jo's Fashion Show in the Hotel San José/Jo's parking lot last Sunday, it sounded interesting. Otherwise engaged, I was unable to attend, but appointed a panel of local fashionistas to report to me about it. Resoundingly, it was called a success, as well as "a true Austin-style event." Produced by Emily Fleming-Nash of Jo's, the models were employees of Jo's and Hotel San José, and as a benefit for animal rescue groups (Town Lake Animal Center, Animal Trustees of Austin, and Lucky Mutts, among others), the models also walked dogs down the runway, often with hilarious results. Average Jo's presented collections from Service, New Bohemia, Therapy, Blackmail, and Goodie Two Shoes, with hair and make-up by Pink and Wet (I'm presuming that you know by now that those are two different salons -- not just some place with a lascivious name). The turnout was so high that the event will become an annual affair.

1,000 MP3s CAN'T BE WRONG I loved those damn songs ... in a way, I was possessed by them. Sure, they seemed silly; they could be trite and banal, and most people had never heard of them. But they meant so much to me. They were the obscure songs that were the soundtrack to my life from the mid-Seventies to the early Nineties -- obscure unless you went to the kinds of clubs that I did then, where the music was the master, and we were willing slaves. I was a true product of the nightclub era, a hothouse flower fertilized with mind-bending drugs, hidden from the light of day for weeks on end. The discos provided a haven in a treacherous world, and for my friends and myself, it was never the homogenized, People magazine kind of disco. To me, disco was only briefly about platform shoes and perms. It was not about the Bee Gees and the Village People, though they are inescapably disco. What it was really about was pure escapism into a netherworld of eternal night. I don't care what they call it: dance, trance, New Wave, acid, house ... it's all disco. All that was required was a synthetic-celestial melody laid over a primitive rhythm track. Add in a few entrancing vocals and some astral drugs, and the effect could be as hypnotic as a snake charmer. By the early Eighties I had to know how to play that music like the club DJs did. I wanted to have the power to make the night sizzle like an electric current and take the mind to places that are seldom explored. The rest of the decade was total immersion into that world. Though I left the drugs behind along with the perms and platforms, the music has remained as meaningful as ever. I had amassed a reasonably extraordinary collection on my hard drive, from a variety of sources -- and the music was just one more bond between me and my computer. It is an intense love/hate relationship -- when everything's going well and going as fast as my slow connection will allow, I'm happy as a clam. But when things aren't going well ... well, I think we all know what that's like. And then the unimaginable happened. I went to bed one night and left my computer on, downloading music. When I woke up, the system had shut down. I restarted it, and everything was great, except ... where was the hard drive with all my documents, archives, photos, and music? It seemed to have died, according to my computer whiz -- and the first question he asked was, "Did you save everything to disc?" And the answer was, "Well, no ..." And there was a valuable lesson to be learned, of course. I grieve like a widow for my MP3 files ... but not for long. I am already on the hunt again, and my return to the hunt raises the musical question: Am I the hunter or the hunted?

GREAT SCOTT I went with Rita Garza to see the closing show of Fully Committed at Zach Scott. Starring Martin Burke and directed by Dave Steakley, this one-man show was a mind-boggling performance, with Burke changing characters faster than multipersonalitied Sybil. Revolving around a day in the life of a reservation agent at a swank New York restaurant, Burke plays the agent, all of the restaurant staff, and all of the diners clamoring to make reservations with an intensity of energy that was exhausting to watch. But it was thrillingly directed and riveting in its pace, and Mr. Burke is amazing. I apologize for not seeing it early enough to tell you about it ... and I apologize to Zach Scott because that's the same thing I said about Love! Valour! Compassion!