Annals of the Wicked 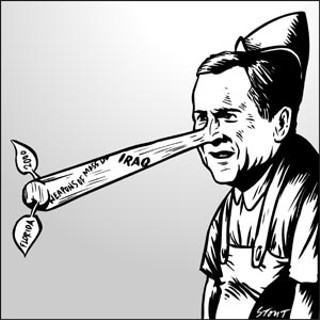 Since May 1, when Bush made his carrier landing to announce victory (a stunt that cost the taxpayers $1 million), more American soldiers have been killed in Iraq than during the invasion. In addition, according to the Sept. 1 issue of Newsweek, since May 1 more than 1,000 American troops have been wounded. That issue also reports that our troops are attacked on an average of 15 to 20 times a day. We spend more than a billion dollars a week there, roughly $14 billion since May 1. We'll spend another $14 billion through the end of the year. (The White House hasn't yet told Congress what the invasion cost.) And there's no end in sight. U.S. troops in Iraq number 138,000, with 34,000 in neighboring Kuwait, plus 10,000 in Afghanistan. If another trouble spot flares up, experts doubt our capacity to respond. And after four months of intensive search we've found no weapons of mass destruction. Aug. 28, Los Angeles Times: "The weapons hunters have yet to find proof that any chemical or biological agents were produced after 1991." Just as the UN said.

We got into this mess because Bush lied about nearly everything, produced no hard evidence about anything, and most Americans chose to believe him anyway.

The following headlines and quotes are from The New York Times unless otherwise noted.

June 17, 2002 -- "Bush to Formalize Defense Policy of Striking First." With virtually no protest in Congress or on the streets, Bush reversed a foreign policy that dated back to 1776. The public's passivity gave him his green light. Everything followed from that.

July 20, 2002 -- "Pentagon Pursues Leak of Anti-Iraq Plan." As early as last summer -- when Bush, Powell, Rumsfeld, and Rice swore they had no plans to attack Iraq -- some honest soul in the Pentagon leaked the plans. Americans ignored the contradictions, the news media didn't investigate much, and protest was next to nil.

Sept. 4, 2002 -- "Bush to Put Case for Action in Iraq." "Administration officials also declared flatly that even if arms inspectors were given unfettered access to Iraq's nuclear sites, Mr. Bush was still committed to the ouster of Mr. Hussein." Bush was set on invasion, inspections be damned. The public's response: business as usual.

Sept. 6, 2002 -- "Congress Now Promises to Hold Weeks of Hearings About Iraq." Do you remember "weeks of hearings"? I don't. Congress abdicated its constitutional power. Why? Because the vast majority of their constituents allowed it.

Sept. 8, 2002 -- "Powell Defends a First Strike as Iraq Option." Colin Powell is somehow still seen as a moderate by the media and the public, but he signed on to naked American aggression though he knew what the public did not: There was no evidence. None.

October 2002, Newsweek. Bush: "The evidence indicates that Iraq is reconstituting its nuclear-weapons program." Satellite photos, Bush claimed, "reveal that Iraq is rebuilding facilities at sites that had been part of its nuclear program." Brazen lies. Unquestioned by most Americans.

Nov. 11, 2002 -- "U.S. Disputes Iraqi Denial That It Has Weapons Banned." Bush (Nov. 21): "Should [Saddam] again deny that this arsenal exists, he will have entered his final stage with a lie." It can't be stated often enough: These grand statements by the White House had zero backup.

Dec. 1, 2002 -- "U.S. Is Preparing Base in Gulf State to Run Iraq War." By this point it was clear that as soon as sufficient preparation was made, there would be war. Bush: "Any act of delay, deception, or defiance will prove that Saddam Hussein has not accepted the path of compliance and has rejected the path of peace." But "compliance" was defined by Bush as "disarmament" -- the disarmament of an arsenal he knew didn't exist.

Dec. 6, 2002 - "A senior administration official tonight said that 'the president of the United States and the secretary of defense would not assert as plainly and bluntly as they have that Iraq has weapons of mass destruction if it was not true and if they did not have a solid basis for saying it.'" Isn't it pretty to think so? But we know now they had no solid basis. They were simply lying.

Dec. 20, 2002 -- "Powell Says Iraq Raises Risk of War by Lying on Arms." But he knew that, as far as weapons of mass destruction were concerned, they weren't lying. He was.

Jan. 1, 2003 -- "U.S. Is Completing Plans to Promote a Democratic Iraq -- 18 Month Occupation." Disinformation, i.e., lies. Now we know they had no plan, and the occupation will go on for years. Chew on that: As events have proved, they had no plan.

Jan. 16, 2003 -- "Administration Suggests War Could Begin Without Full Evidence of Weapons." Well, with troops getting into place, they had to change their position, didn't they? They knew there would be no evidence. They were depending on momentum. People would sanction the war not because they believed in it but because they felt it was inevitable.

Jan. 24, 2003 -- Powell: "The question isn't how much longer do you need for inspections to work. Inspections will not work." Inspections would not and could not yield the answers Bush demanded, because there were no weapons of mass destruction in Iraq, as the White House knew.

Jan. 28, 2003 -- Powell: "We have seen contacts and connections between the Iraqi regime and terrorist organizations, including al Qaeda." Lies, thoroughly discredited by investigators from all over the world. Remember that Powell said, "We have seen." His credibility is shot.

Jan. 28, 2003 -- Bush, in his State of the Union: "Iraqi intelligence officials are passing as scientists [that UN] inspectors are supposed to interview." The White House had to back off on that within days. It was a complete fabrication. A big whopping lie.

Jan. 30, 2003 -- "Bush Officials Debate Release of Iraq Secrets." More disinformation. There was no debate because there were no "secrets." The White House released that story to give a gullible public (and a gullible media) the impression that such secrets existed.

There would be many more lies until, on March 20, Bush announced his war: "The people of the United States and their allies will not live at the mercy of an outlaw regime that threatens the peace with weapons of mass murder." Cheney said our troops would be "greeted as liberators." Rumsfeld made this incredible statement (March 28): "I don't believe the United States has responsibility for reconstruction [of postwar Iraq]." Deputy Defense Secretary Wolfowitz said, "Iraq would be able to pick up the tab for post-war rebuilding. We're dealing with a country that can really finance its own reconstruction relatively soon." Now we learn Iraq's oil production won't function for at least another year, and only if tens of billions of our dollars are spent to do it.

Bush, Powell, Rumsfeld, Rice, Cheney, Wolfowitz -- their statements and predictions were flat-out lies or dead wrong. Who's paying the price? An Iraq in chaos, more than 150 Americans dead, and more than 1,000 Americans wounded, since May 1 -- not to mention hundreds of billions not spent on our education, medical system, infrastructure, and environment. But America has yet to hold the Bush junta accountable. They're still calling the shots. Still lying.