Speaking of Queer Eyes: Hey, don't look at us … everybody calls it SoCo. And everybody seems to love the new Nordstrom … including our Style Avatar. 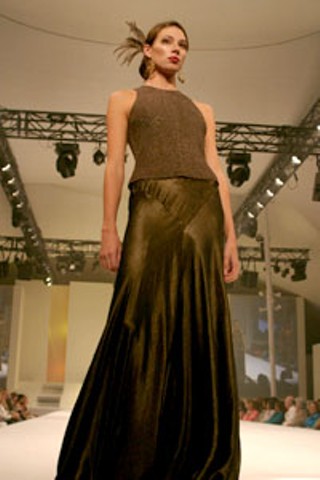 NORTH OF THE CATWALK The big opening gala at Nordstrom last week was pretty amazing. Where did all those people come from? It looked like at least 2,000 people strolling the aisles of the posh new emporium, and a very well-dressed crowd, at that. With abundant food and drink, the shopping was not a chore -- the merchandise is as accessible as it is desirable. The highlight of the gala took place in a tent out in the parking lot -- a fashion show so fabulous it was like a little slice of New York in our own back yard. It looked like a $500,000 show, with dozens of gorgeous models imported from our northern neighbors, with expert staging, absolutely fabulous lighting, and wonderful music. The runway was enormous, giving the models lots of room to do what models do on the runway, and from my seat at the very end of it, it was an enchanting vision. A number of American and European collections were shown, as well as some segments of assorted designers, including a grouping of men's and women's called Austin Casual (apparently we'll all be wearing shades of blue and brown this fall; it seems you can hardly escape it). Collections from Burberry, Oscar de la Renta, and Jean Paul Gaultier were dazzling, and Nordstrom showed us how it should be done. The last two segments of cocktail and eveningwear held me in thrall. As one gorgeous creation after another came at us, it was a breathtaking sight, and one of those moments that remind me of why I love fashion.

FASHIONABLY GAY Gee, it seems so popular to be gay again ... at least if you watch television, that is. The enormous numbers that the debut of Queer Eye for the Straight Guy brought in on Bravo impressed its owner, NBC, enough to show it on mainstream TV -- and now it's the first thing people bring up when they realize you're gay: "Oh, have you seen that show yet?" Well, yes, darling, of course we've seen that show ... many of us practically live that show every day in our private lives. It is our God-given duty as homosexuals to dispense advice on home- and self-improvement to everyone we meet, even if it's unsolicited. Naturally, there's been lots of hue and cry about what awful stereotypes are portrayed on the show. But the true beauty of stereotypes is that, for better or for worse, they're usually very accurate in many respects. I was at a party the week of Queer Eye's premiere, and it was the big topic of conversation. Every queen I knew agreed that we would behave exactly like the Fab 5 if we were in that situation. Of course it's not a fair and balanced portrayal: We're talking about interior designers and hairdressers and other culture queens! We've got characters like the waspish fashion queen Carson Kressley; the mild-mannered food and wine expert, Ted; Kyan, the cosmetologist with the heart of gold; Thom, the interior designer who tries not to act like one; and Jai, the Miss Manners of the bunch who seems to be thrown in so we can pretend the show is racially diverse. Each and every one of them camp it up in their own way as they make over some style-challenged heterosexual into a well-groomed metrosexual. I like the current dish on the Web that argues that Queer Eye is at the What's Happening!! and Different Strokes stage of mainstream acceptance. Boy Meets Boy is nowhere near as good; in fact, it's much worse: It's as lame as any of its hetero counterparts. If it were half as good as Temptation Island I might like it better. On the other hand, there are lots and lots of shows geared directly to straight folks ... I think it'll be alright if we gay people have a few shows, don't you? Gee, maybe even our own network someday. ...

SOCO SLUMMING or WHAT'S IN A NAME? Gasp! It's come to my attention that there's some merchant out there who loathes me and the Chronicle because we insist on propagating the term SoCo. But his ire is misplaced. I didn't name it SoCo; when I started covering it (pretty much back around the time my column began -- exactly four years ago next issue!) there was already the Gallery SoCo on one end and SoCo Center on the other. Perhaps I did help popularize it (though I prefer "the chic SoCo strip"), but can I help it if it's a catchy name? Lighten up: otherwise I'll be nervous about mentioning things like the new D & L's Texas Music Cafe opening in the old Under the Sun location. I have no doubt this combination of Texas food and music will be a crowd pleaser. With its fab new Evan Voyles neon sign about to go up, it should open any day now. Also opening pretty quick is Factory People in the old Just Guns space. Hailing itself as a high-end interactive shopping experience for men and women that is "part music venue, part clothing store, part gift shop, magazine stand, and café," look for it in October ... on the chic SoCo strip.