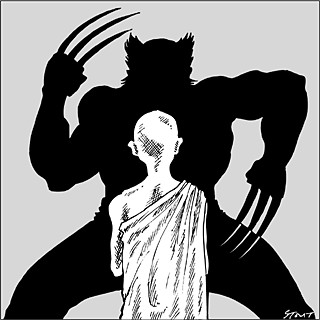 Something sinister has happened to the idea of being human. The most blatant examples are, as usual, on the screen: Spider-Man, The Hulk, Daredevil, The Matrix, X-Men ... TV's Buffy and Xena ... and all those special-effects martial-arts flicks where fighters leap, spin, even fly. Don't get me wrong, I love some of this stuff; but, one and all, they rely on the same underlying shift in our collective consciousness: The concept of "hero" has been replaced by the fantasy of "superhero."

A hero can do what most of us can't but what all of us might. We might, on our very best day, if we found the courage and had some (possible) skills, we just might be heroic. It's possible. That's the attraction of the hero: To be heroic is within the achievable realm of human capability. The concept of hero makes a noble assumption: that the human race is redeemable because heroic behavior is always, for anyone, at least a latent possibility. You can kill or defeat a hero, even in a fair fight, for true heroes are not assured of victory (or what would be heroic about their attempt?). But you cannot kill the hero's heroism; you cannot take from the hero what he or she is. Win or lose, heroes redeem themselves by their behavior; and, if they lose, because what they attempted is possible, it follows that others can rise to heroism and take their place.

But on your best day a genetically engineered radioactive spider isn't going to change your DNA. On your best day you will not be told you're the Chosen One who'll strike fear into demons and vampires. On your best day you will not fight 20 and 30 warriors at a time, as Xena does, and best them all. Nor will you ever keep your cool in the face of every threat, like James Bond, or shoot every bad guy you aim at with uncanny speed, like Clint Eastwood's Man With No Name -- the two cinema icons that set the standards for superhero invincibility. Obviously, if you're virtually invincible you're not a hero because you're not really taking a chance, and certainly you're not taking the biggest chance of all: the chance that, as in Braveheart, you will lose your family, your cause, your life, and everything else -- everything but your heroism.

My preferred definition of the possible hero is Raymond Chandler's, from his essay "The Simple Art of Murder" (though he overlooked that women can be heroes too): "Down these mean streets a man must go who is not himself mean, who is neither tarnished nor afraid. ... He is the hero; he is everything. He must be a complete man and a common man and yet an unusual man. He must be, to use a rather weathered phrase, a man of honor -- by instinct, by inevitability, without thought of it, and certainly without saying it. He must be the best man in his world and a good enough man for any world. ... He will take no man's money dishonestly and no man's insolence without a due and dispassionate revenge. He is a lonely man and his pride is that you will treat him as a proud man or be very sorry you ever saw him. ... He has a range of awareness that startles you, but it belongs to him by right, because it belongs to the world he lives in. If there were enough like him, the world would be a very safe place to live in, without becoming too dull to be worth living in."

Chandler's hero, the private detective Marlowe, faced the world with nothing but his wits, his integrity, and the ability to give or take a punch. He didn't win every fight, and he didn't hit everything he shot at -- in fact, he rarely shot at all. If he got ganged up on, he got beat up. And he didn't have eyes in the back of his head; in Farewell, My Lovely, a woman with a blackjack sneaks up on him and knocks him cold -- and, because she has a good brain, outwits him for most of the story. The Chandleresque Robert Mitchum character in Out of the Past is outwitted by Jane Greer and almost everybody else; that he's always playing catch-up, and dies in the end, doesn't make him any the less heroic.

That's the kind of hero Humphrey Bogart, Gary Cooper, John Wayne, James Stewart, and Clark Gable played in their best films. In Casablanca Bogart fires only one shot; he's also a weepy drunk and indulges mightily in self-pity -- but he projects a heroism far beyond the range of Ben Affleck or Keanu Reeves. In Red River and The Searchers Wayne is obsessive to the point of psychosis and often cruel. In High Noon Gary Cooper never hides his fear and isn't too proud to beg (pleading with people to help him); and it's his bride, Grace Kelly, who saves his life by firing the last shot; nor is he above bitterness when all is said and done, throwing his badge into the dust with contempt for everyone without the decency and integrity to make a stand. In Winchester '73 and The Naked Spur James Stewart, too, is often on the edge of psychosis; The Naked Spur ends with him collapsing weeping into Janet Leigh's arms. Clark Gable's last film, The Misfits, summed up his film persona: arrogant and glib, not above taking advantage of suckers, a sloppy drunk, stuck in self-delusion as far as what his cherished independence really consists of; he becomes heroic not by an act of bravado but by admitting that Marilyn Monroe is right. Yet these characters are all heroes, because they must overcome their own flaws -- flaws which do not magically disappear at the end of the film -- in order to rise to the heroic. Overcoming their flaws is, in fact, what makes them heroic; and that's what makes a person in the audience think, "Maybe, on my best day, I could be like that." Because that's what defines our best days: We rise beyond our flaws.

I've often wondered, watching the latest batch of superhero films, what little children in the audience are learning. Do these superheroes cultivate an inflated, unreal sense of who they might one day be -- an expectation that can only be disappointed, so that finally they will think themselves less human for not being superhuman? Are they imbibing an insidious disrespect for human fallibility and weakness, especially their own? Are they learning that fighting against great odds is futile if you're merely a human being? Are they learning passivity -- that if they don't have superpowers and superdestinies they'd best mind their own business and take what comes? Do they go home to their video games already defeated, investing their inner lives and their capacity for power in a joystick that allows them the illusion of influencing what happens on the screen, when actually they are being subservient to that screen?

Our troops in Iraq (dying at the rate of almost one a day) are learning that fancy weapons and the "Bring it on!" rhetoric of their swashbuckling leaders can't save them from the bullet of a determined human being. Our troops don't feel like heroes anymore, because they were sold a bill of goods that equated "hero" with "winning," and they know they haven't won. They equate heroism with being in the right; but if they were in the right wouldn't they be welcomed, as their leaders promised they'd be? Instead they are increasingly despised by the people they thought they were rescuing. So their morale is plummeting. They were set up for demoralization by the dangerous fantasy, instilled by their leaders, that the United States is the superhero of nations.

Writing his last Marlowe novel (Playback), Raymond Chandler penned a letter to a friend describing Marlowe as "a lonely man, a poor man, a dangerous man, and yet a sympathetic man. ... I think he will always have a fairly shabby office, a lonely house, a number of affairs, but no permanent connection. I think he will always be awakened at some inconvenient hour by some inconvenient person to do some inconvenient job. It seems to me that that is his destiny -- possibly not the best destiny in the world, but it belongs to him. No one will ever beat him, because by his nature he is unbeatable. No one will ever make him rich, because he is destined to be poor. But somehow, I think he would not have it otherwise. ... I see him always in a lonely street, in lonely rooms, puzzled but never quite defeated."

Not a fate a superhero would settle for. A hero knows every victory is temporary and that a hero's worst enemy is himself, herself, and ... Time. "There's always a faster gun somewhere," was an oft-repeated truth in old Westerns. Our kids aren't being taught that. Hollywood now teaches that if you don't always win you're a loser. But "always winning" isn't possible, so our kids are being set up to think of themselves as losers; I fear their innate possible heroism will be harder and harder for them to find, even on their best day.