Keg party at the lake! We get starstruck at the 10th anniversary party for Dazed and Confused, Richard Linklater's classic ode to bud and tube socks. 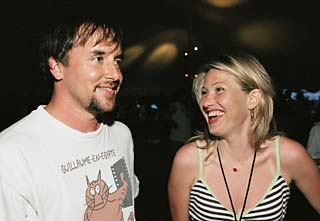 GLAZED AND DEFUSED "It's a command performance," my sister Margaret announced to me late Friday night. "You have to go." "Whose command?" I gasped, rolling my eyes, "Louis Black's?" "Yuup, Louis insists. Here's our VIP badges." Well, it wasn't too much of a chore -- it was the 10th anniversary reunion for the legendary film Dazed and Confused, and I could do worse than hobnobbing with a bunch of movie stars. It was outdoors at Lake Walter E. Long (at the Moon Tower, a famous location from D&C), and I loathe outdoor events, preferring to glide from one air-conditioned oasis to another. But the food was from my favorite barbecue place, Ruby's, so I knew I could face anything. We hobnobbed with cast members Matthew McConaughey, Parker Posey, Wiley Wiggins, Joey Lauren Adams, Sasha Jenson, Jason London, and Michelle Burke. The extremely pleasant and gracious director Richard Linklater broke away from his crowd of admirers to greet his old friend Margaret (my sister, of course), and we all shared brief pleasantries. We hung with other local glitterati, including Texas Monthly's Evan Smith and his lovely wife, Julia; Austin Film Society's Rebecca Campbell and her husband, Andy; my cantankerous boss, Louis Black; Alamo Drafthouse's Tim League (who, along with his wife, Karrie, seems to be one of the biggest successes to blossom before our very eyes); Chronicle Music Editor Raoul Hernandez; and Christopher Gray of "TCB" fame, escorting the beautiful Chrystal Heath (formerly of the Shiverz -- see her new band, the Risk, at Room 710 on Saturday, June 7).

When I need good dirt, do I head for Home Depot? Absolutely not -- I go directly to the Internet. I have so many favorite places to look and am seldom disappointed. I am particularly fond of Thesmokinggun.com, which publishes court transcripts, arrest records, criminal complaints, and just about every other piece of incriminating evidence they can find. The Jeannette Walls newsletter on Msnbc.com is wonderful, though, sadly, it comes out only once a month. Mme. Walls has a sharp tongue and excellent connections. Go to www.msnbc.com/news/915175.asp to sidle up to the trough. Ted Casablanca's "The Awful Truth" is on E! Online. A large part of fellow Texan Casablanca's charm lies in his particular writing dialect, and his Blind Vices are always a fun guessing game. Michael Musto's Village Voice column, "La Dolce Musto," is hysterical, dishing dirt that only Musto would dare to dish; it can be found at www.villagevoice.com/issues/0321/musto.php. The "Chic Happens" column in www.hintmag.com has to be my favorite of the bitchiest columns on earth. Writers Horacio Silva and Ben Widdicombe are unquestionably the meanest and the funniest. Gawker.com is another winner -- and must be read from the bottom up, just to keep everything in chronological order. They have it in for Anna Wintour, and they are merciless. Truly fab. I'm giving an honorable mention to Misanthropic-bitch.com, because it's not gossip, but the truly wry and hilarious ramblings of a woman who is not afraid to say the things we all often think. Try www.misanthropic-bitch.com/stupid_pregnant_teens.html for starters.

I was familiar with Jose Luis Salon (1717 W. Sixth, 474-1146), a hidden little jewel tucked away at the end of Sixth Street, but never had my hair done there. So when I met owner/partners Jose Luis Buitron and Bill Pitt at a recent social event, I knew I needed to pounce. It was time for my old hair color to go far away and to try something completely new. Again. My hairdresser, the talented and funny Blaine Morgan, and I bonded immediately. "I want my hair to be the color of Mrs. Robinson's in The Graduate," I told him, knowing he was too young to understand the reference. But no: "Omigod, I love that!" he squealed, and went right to work. I was completely at ease as he took control, telling me how he was going to do it. He decided to do very fine highlights, but with serious contrast, and I thought that sounded wonderful. As the color processed, I relaxed in the lovely environment and carried on a very entertaining and gossipy conversation with Morgan. When he determined that everything was just perfect, we discussed the cut. I basically gave him free rein, with a few boundaries: I wanted it very short in back, and worn forward in front. His eyes grew flinty as he assessed my head and he dove in, aggressively mowing down the excess and whipping my locks into shape. It felt lighter and more summery immediately, and shortly thereafter, I too was squealing with delight as I examined it in the mirror. The highlights worked fabulously with the cut, and I felt incredibly chic. I give Morgan an A++ for his excellent work. I'd also have to give an excellent rating to Aileen Perry, who groomed my eyelashes and brows. For the tinting, we opted for a dark brown rather than my usual black, and as far as the waxing went, it was over in two seconds, and I looked marvelous. Can't wait to try her facials, too.
More After a Fashion columns