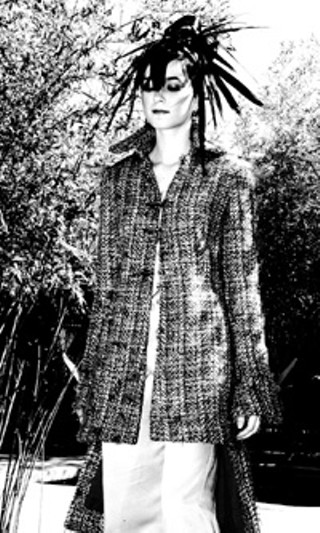 Fall 2003 from Tomer Gendler -- his well-received collection shown on a glorious day at the Hotel San José (Photo By bobshermanart.com)

THE TOMER SHOW I have chosen to take Tomer Gendler, designing under the label Tomer, as seriously as he takes himself. At his most recent show, on a glorious day at the très chic Hotel San José, one viewer said, "If his last collection looked like that of a first-year design student, then this, his second collection, looks like that of a second-year design student." I'd go further than that. I'd say it looked like that of a senior collection; in fact, it was better than many of the senior collections I've seen at UT. It sounds like a putdown, but it's not. It is my belief that a person is not a designer just because they say they are. Designing is a skill that is learned just like every other trade, craft, or profession. I couldn't be a doctor just because I said I was one. At his first fashion show six months ago, Tomer announced that he was a completely untrained designer. There is no question that Tomer is gifted, and I am convinced that he will be a very good designer someday. And he's getting better rapidly. I liked the attenuated lines of the collection, and the fabrics were gorgeous. The clothing construction showed radical improvement, and the styling was an entirely different approach than last time. If Tomer is guilty of anything, it is the same thing that most design students are guilty of: putting too many details on a garment. We saw dresses that combined three and four fabrics and textures at a time, with floating panels and separate sleeves, draped with utility strapping and buckles. See? It even sounds like a lot. In retrospect, I missed the Balenciaga-ish, sculptural simplicity of his first collection, and I really, really missed his menswear, which I felt held so much promise. But some of the new dresses had great style and originality -- factors that will become more refined with experience. Tomer's ability to put together a cohesive collection is, with minor exceptions, excellent. And somewhere between the simplicity and serious detailing, he will find his voice and signature. He already knows how to put on a great show. The crowd was ultrastylish, the drinks and hors d'oeurves were divine, and the location gorgeous. He's definitely on to something, and I'm eager to see him keep up the good work.

THE BENEFIT BRIGADE Saturday, April 12, 7pm, kicks off the Love Ride Event fashion show featuring apparel from the Harley-Davidson collection and sponsored by Paul Mitchell Systems to benefit the Austin Children's Shelter. Hair will be done by Paul Mitchell and Jacomo Forbes, with make-up by Ultimate Face Cosmetics and national make-up artist Anthony Hernandez. To be held at the new Harley-Davidson Austin, 10917 S. I-35, the event is free and open to the public. Sunday, April 13, is the big event, the actual Love Ride itself, a celebrity motorcycle run. If you wish to participate, there are levels of involvement from $250 to $1,000, with varying benefits to each level. For more info call 469-9193... By George events are not only few and far between, but always fabulous, so listen up: The Sixth and Lamar location is presenting Spring in the Dark, an evening of fashion and groove benefiting SafePlace. The evening promises cocktails, appetizers, music (local legend Erik Hokkanen and DJ Trey Lopez), a silent auction, and all the clothes you covet! It takes place on Thursday, April 17, 7-10pm. Admission is free, so bring your dancing shoes. Call 472-5951 for further info.

THE PEDO-FILE It seems that someone out there actually believes that Michael Jackson is innocent of molestation charges. I would have thought that a rare breed, but there is now a Web site supporting that theory. Leavehimalone.com "intends to provide a forum for those who support the artist, his work, his character, and ultimately his right to live a life free from unfair scrutiny and tabloid press." That's right -- Jackson is such an important artist that he should be allowed to continue his freakish behavior unsupervised. Continuing in bald denial, the site alerts you that, "You, too, can show your support for Michael. Join us in launching the 'Leave Him Alone' campaign by proudly wearing the campaign's official T-shirt." One question to the founders of this site: Would you let your children spend the night with Michael Jackson? We'll see if they respond...