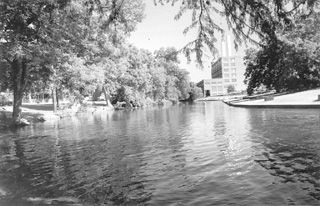 The Comal Power Plant in New Braunfels still stands vacant on the southern edge of Landa Park. It has been 20 years since the power plant's big turbines generated a kilowatt of electricity. Three years ago it looked like the seven-story, brick building might be converted into a boutique hotel, but those hopes soon died.

"We had to go to plan B," says Jeff Singleton, project manager for the Lower Colorado River Authority. "The hotel deal just never worked out. Financially, it just wasn't practical." The contractor would basically have had to build a building inside a building.

The new plan calls for the building to be filled with about 100 loft apartments surrounded by another 178 garden apartments across the road from the Wursthalle, the site of WurstFest on the first weekend of November.

"This is the most exciting thing I've ever worked on," says Larry Peel, an Austin developer who will rescue the building from abandonment and decay. Peel is an award-winning builder who has built thousands of apartment units in Central Texas. Singleton says he couldn't imagine finding a better developer for the project than the man with a reputation for environmentally sensitive designs that incorporate community living spaces.

"Real estate development is a matter of timing," Peel said from his Austin office. Plans are for the lofts to be large and marketed to the upper end of the leasing market. From the outside, the building will look much like the icon that was once an example of New Braunfels' economic future.

This was the largest power plant west of the Mississippi River when it opened in 1926. Originally, the plant was designed to burn lignite coal that was mined near Rockdale, but environmental problems soon forced the boilers to be converted to natural gas. It was the rising cost of fuel that forced the LCRA to close the 60,000 kWh electric factory in 1974.

Between 1998 and 2000, the river authority spent around $11 million to strip the building to its steel-girder skeleton and red-brick shell. Peel estimates that the project will cost about $20 million to complete. He has a small army of engineers working on all aspects of the project from cooling the building using water from the spring-fed channel running alongside the building to replacing the hundreds of windows with low-energy transfer glass. "We're still not sure what to do with the 36-foot-deep basement," he says.

Peel is also working to get the building listed on the National Register of Historic Places, which will qualify the project for a sizeable tax credit. The listing will also protect an example of an architectural style of a bygone generation from alterations.

"We have received a great response from the community," Peel says. All of the New Braunfels citizen organizations with which he has met have supported the idea. "It's hard for a building like that to be a community asset when it's sitting there off the tax rolls," he says.

The old power plant occupies 28 acres at the southwest entrance to Landa Park off Seguin Street, a few blocks from the Main Plaza. The park is the centerpiece of the city's thriving tourist trade. The Comal River, the shortest river in Texas, bubbles to the surface from a spring just north of the power plant.

During the summer, tubers float the chilly waters through the millrace of a gristmill that was washed away in a flood several generations ago. The park also has two spring-fed swimming pools, a kiddie train, and playgrounds. A small but challenging nine-hole golf course fills much of the city park within walking distance of the power plant. Schlitterbahn Water Park rings much of the park. For more information about visiting New Braunfels, call 800/572-2626 or visit the city's Web site at www.nbcham.org.

The developer hopes that construction will begin this fall and will be completed by 2005. Plan B might be the Comal Power Plant's last chance to escape the wrecking ball. "This project is so different and so challenging," Peel says. "Nothing has ever been done like it in the state of Texas."