George W. Bush refuses to put our money where his mouth is in matters of domestic defense, even though all the experts testify that America is as vulnerable to major terrorist attacks today as it was on 9 / 11. 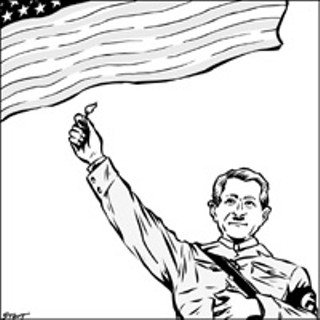 More than 50% of the population of Iraq is under 15 years old. That is the fact to remember when discussing the U.S. invasion of that country: The Bush administration plans to rain 3,000 bombs in 48 hours -- the most overwhelming bombardment in history -- on a nation that is half children. This, according to Bush, is in the name of "good," against "evil." No evidence cited by President Bush, Secretary of Defense Rumsfeld, and Secretary of State Powell has stood up to scrutiny. Robert Scheer, The Los Angeles Times, March 11: "After 218 inspections of 141 sites over three months by the International Atomic Energy Agency, Mohamed ElBaradei charged that the United States had used fake and erroneous evidence [my italics] to support claims that Iraq was importing enriched uranium and other material for the manufacture of nuclear weapons."

As for chemical and biological weapons: The "poison factory" Powell claimed was operating in northern Iraq was visited by reporters within days of Powell's UN presentation and found to be without plumbing -- an impossible condition for a chemical laboratory. That didn't stop Bush from mentioning the "poison factory" again in his press conference. (No journalist present had the nerve to call him on that.) Powell claimed "evidence" that Iraq has "truck-mounted labs" making biochemical weapons. Newsweek, Feb. 17: "Biowar experts ... say truck-mounted labs would be all but unworkable. The required ventilation systems would make them instantly recognizable from above, and they would need special facilities to safely dispose of their deadly wastes. ... And U.S. intelligence, after years of looking for them, has never found even one." On March 9, military analyst William M. Arkin wrote in The Los Angeles Times, "Incredible as it may seem, given all the talk by the administration ... there is simply no hard intelligence of any such Iraqi weapons. There is not a single confirmed biological or chemical target on their lists, Air Force officers working on the war plan say [my italics]." Arkin quotes Maj. Gen. John Doesburg, described as "the Army's top biological and chemical defense commander": "It takes a lot of chemicals to have a significant effect on the battlefield. We don't suspect [Saddam] has the stockpile."

If Saddam Hussein hasn't enough such weapons for a "significant effect" in defense of his own country, he certainly hasn't enough to spare for a significant attack on America. That attack may come, but not from him. Which brings up the strangest and most sinister fact of this chaotic, dangerous time: Aside from increased airport security (and even that, as many investigations have proved, is badly flawed), since 9/11 the Bush administration has done virtually nothing to protect America from a terrorist attack. Incredible as that may seem, the facts are beyond doubt.

The New York Times, March 3: "The Justice Department's inspector general reported that the immigration agencies now answering to [Tom Ridge, Homeland Security secretary] had lost track of thousands of illegal immigrants who had final court orders for deportation, including many from Iraq," adding, "[A]mong private scholars and major research groups that study domestic defense issues, there is a growing consensus that the administration is not devoting the money needed to keep the public safe from attacks." This is something of an understatement. Paul Krugman, The New York Times, Feb. 25: "Firefighters and policemen applauded Mr. Bush's promise, more than a year ago, of $3.5 billion for 'first responders'; so far, not a penny has been delivered [my italics]."

Maureen Dowd, The New York Times, Feb. 23: the "American Association of Port Authorities [estimates] that it would cost $2 billion to make the ports secure. But since Sept. 11, only $318 million has been spent. Although Mr. Bush himself endorsed a program to screen cargo at foreign ports, his budget provides no money for it." A year ago, Rep. Edward J. Markey, D-Mass., goaded Bush to place anti-aircraft guns around our vulnerable nuclear power plants, as other countries have done. Though 21 U.S. nuclear facilities are located within five miles of an airport, and though only four of our 103 plants were designed with a (small) plane crash in mind, our nuke plants remain undefended.

A Feb. 20 The New York Times article by Daniel Benjamin and Steven Simon (members of the National Security Council, 1994-1999) cited many threats about which nothing has been done: "Recreational kit airplanes can be built for a few thousand dollars and converted into remote control weapons. These planes can take off from a grass strip shorter than a football field and give terrorists an easy means to attack from within American borders. A growing number of countries, including Pakistan and Iran, have anti-ship cruise missiles that, if stolen or diverted, could be converted into land-attack cruise missiles. These missiles can be transported in nondescript containers and guided by inexpensive global position system devices to targets mapped with available satellite imagery." As for shoulder-fired anti-aircraft missiles, they write: "The world is awash in thousands of these stinger-type missiles. ... Counter-measures ... used on military aircraft can also be employed on commercial planes. ... In the late 1990s ... the [airline] industry blanched upon learning that it would cost $1 million to $2 million per plane. ... Washington needs to step in, at a cost of around $5 billion [about the cost of two American fighter-bombers]." About these crucial issues, nothing has been done or even suggested by the Bush White House.

Feb. 13, The New York Times: "Many state and local governments say they are unprepared to deal with a major terrorist attack because of Washington's delay in providing them with billions of dollars in emergency-response aid that was promised shortly after the Sept. 11 attacks."

March 5, The New York Times: Colleen Rowley, the FBI agent who last year blew the whistle on the agency's mishandling of leads to the 9/11 attackers, made public her recent letter to FBI Director Robert S. Mueller. In part, her letter reads: "We should be deluding neither ourselves nor the American people that there is any way the FBI ... will be able to stem the flood of terrorism that will likely head our way in the wake of an attack on Iraq."

All the experts testify that Iraq is not a danger to us, and the CIA and FBI have both reported that the risk of a domestic terrorist attack goes up immeasurably if we attack Iraq, but Bush is attacking Iraq. All the experts testify that America is as vulnerable to major terrorist attacks today as it was on 9/11, but Bush has done almost nothing for domestic defense. The New York Times, Feb. 3: former Senator Warren Rudman, R-N.H., considered an expert on domestic security, "said there was 'no rational answer' for the Bush administration's decision not to seek more money for domestic security."

There are three possible reasons for Bush's otherwise inexplicable disregard for America's safety. First is sheer incompetence, induced by madness: He is so obsessed with Iraq's oil, and/or the glory of conquest, and/or the compulsion both to revenge and outdo his father, that nothing else matters -- including our safety. Second is that Bush knows something he won't admit (for it would demolish his Iraq-attack rationale): that, as Gen. Ralph E. Eberhart stated, "there is scant intelligence to suggest an immediate domestic threat from al Qaeda or other terrorist groups" (The New York Times, Dec. 13). Third, there is what I call the Bush Reichstag Barbecue Scenario.

On Feb. 27, 1933, a month after Hitler became chancellor of Germany, the Reichstag (the seat of Germany's parliament) burned down. The evidence points to the Nazis setting the fire themselves. Hitler's response was immediate and drastic. He blamed Communist terrorists and issued a decree that read as follows: "Restrictions on personal liberty, on the right of free expression of opinion, including freedom of the press; on the rights of assembly and association; and violations of privacy of postal, telegraphic and telephonic communications; and warrants for house searches ... are also permissible beyond the legal limits otherwise prescribed." Bush, Cheney, and Ashcroft are looking for an excuse to go "beyond the legal limits otherwise prescribed." A second 9/11 would be an excuse to grab all the power they give every indication of seeking. They are counting on a stunned and terrified America to grant them that power. So they are doing nothing to defend us from terrorism. In fact, they are doing everything to make us vulnerable to terrorism. The FBI and CIA have assured them that an attack on Iraq will do just that. And so they attack Iraq. But they are really attacking ... democracy ... you and I ... and everything the word "America" once stood for.