After a Fashion: SXSW Thursday

Which local / international celeb has a "nice butt," according to a bevy of hot tub beauties? Who wore white tennies with her black Liz Claiborne? And who needs a bike more? A Fish? Or a Woody? You know you'll only find out in here! 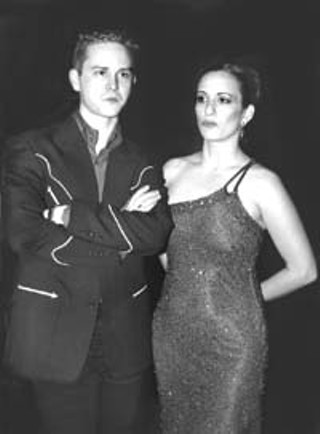 Groomed by Bella Salon, dressed by Blackmail and Giata, 101X's Drew Bennett and Trina Quinn are the prom king and queen of the Austin Music Awards. (Photo By bobshermanart.com)

THE DIRT The best place to view the Austin Music Awards was from the couch in the dressing room where Billy Bob Thornton, Willie Nelson, and Woody Harrelson were sitting. Quite a cozy scene as the parade of sycophants marched through, randy ol' Billy Bob reached out and stroked Miss Kitty's leg, saying, "Nice pants." Presumably he was referring to her black lace Dolce & Gabbana bell-bottoms from St. Thomas Boutique. Speaking of wacky Woody, he was feeling overwhelmed by the attention of his fans on the street; just about everyone seems to be trying to give him pot. Besieged and beleaguered, he snatched a nearby bicycle and rode off down the street leaving one young woman yelling, "Woody Harrelson stole my bike! Help!" But Woody was long gone already, with Warner, his manager, chasing him down, yet afraid to yell Woody's name, lest he draw further undesirable attention. Hearing someone running behind him, Woody hollered, "Warner, is that you?" and then surrendered the bike (which was eventually returned to its rightful owner). ... What studly movie star wound up in a hot tub of a famous producer/director with a bevy of beauties? Sounds very Hollywood, yes? But I can assure you, the cast was entirely local, with one participant adding, "Matthew has a great butt, but of course, you already knew that."

NIGHTMARE ALLEY I could hardly believe my eyes. There I was, standing in the Austin Music Hall watching my esteemed sister Margaret make her welcoming speech. Her speeches are always so warm and heartfelt (she always gives me special acknowledgment, of course), and she always looks so nice ... almost always. But this particular evening, I couldn't begin to tell you what she said in her speech, or how she said it. I was transfixed: She stood there, with some sort of words coming out of her mouth, dressed in luscious Liz Claiborne black velvet, with faaabulous hair by Deborah Carter of Pink Salon, gorgeous jeweled earrings that I gave her ... and ... and ... dear god, I can hardly bring myself to say it. I'm too verklempt to go on. Give me a moment ... OK, I'm strong now ... I think I can say it: She had on ... she had on white tennis shoes with her dress. There, I've said it. White tennis shoes and a black velvet cocktail dress! Let that horrid little vision swirl around in your mind. But did I stand idly by with slack jaw? Oh no. The Music Hall took on a nightmarish quality; the lights became dim, my head was spinning, and with mounting horror, I realized that not only was she wearing tennis shoes ... onstage ... in front of hundreds and hundreds of people ... but ... god help me ... she was carrying a purse. A purse. Onstage. Not only was it a purse, but clipped to the outside of it was a cell phone and a walkie-talkie. Like she might have to take an important call during her speech, or respond to an emergency in the tent. The atmosphere became very Carrielike, as I imagined the Music Hall bursting into flames, and expected the beams from the ceiling to fall on us. I was sickened and left the room, unable to watch another moment of this. For all I knew, she was going to be showing us her thong next and we'd all wind up being electrocuted by a microphone gone crazy. All I can say is, watch out for next year, when she'll be taking a cue from the Interactive Awards and will be wearing sweats onstage with her tennis shoes and purse.