After a Fashion: SXSW Wednesday

Ka-plam! Your Style Avatar is out and about and making the scene at SXSW. It's just begun, y'all. Woody Harrelson and Matthew McConaughey mugging for the camera before they tear up the town (Photo By bobshermanart.com) 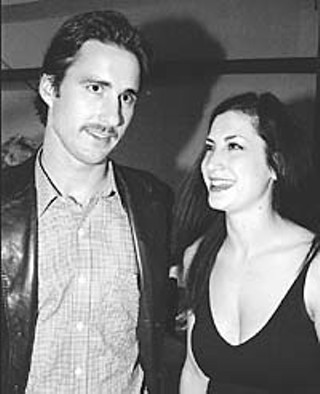 DEAR TOURISTS (or should I say, "Dear Cowboy and Cowgirl Wannabes ..."?) Trying to look like you fit in seems like an admirable pursuit, but it's a road that can be fraught with danger. For instance, whatever you do, don't buy those pre-beat-up cowboy hats that are now available everywhere, including J.C. Penney. It's supposed to make you look like you've worn that ol' hat all your life. It doesn't. It brands you as an idiot who's trying desperately to be something you're not, and it offends the very people you're trying to mimic.

SXSW SAMPLINGS I went with Mega 93.3's Miss Kitty and her posse to the Four Seasons to interview Mark Consuelos (Mr. Kelly Ripa) about his film American Dancer. Turned out to be a scheduling snafu of some kind, and Consuelos curtly dismissed Kitty, saying she'd have to go through his "people" for approval. The once-dissed, twice-shy Miss Kitty declined his offer and strode away... So it was off to Elysium for the Texas Rollergirls party -- Bob Ray's documentary about our local roller derby scene. It was very festive and definitely one of the edgier parties of the SXSW season. Among other notable factors, it was catered by our good friends Steve and Lisa Dean at Dean's Texas Music Cafe, which will be opening shortly on South Congress ... no, really... Then back to the Four Seasons for the Interactive Awards. While it held little of the glamour of the Oscars, it was fun to see so many tech folks enjoying a very important moment in their lives. Eventually we wound up at the party for Mark Consuelos at Roy's. Evidently, by then Consuelos had been told that Miss Kitty was pretty important around here, and he and his peeps began sucking up like crazy. But it was a veritable suckfest anyway with so many media types around to suck up to: Louis Black, Marjorie Baumgarten, and myself from the Chronicle, Samantha Ostertag from Austin Woman, Lance Morgan from Austin Monthly and Elegant Texan, and the aforementioned Miss Kitty to name a few... Dinner at Güero's with Lucinda Williams is always a treat. Chip Feuerbacher may be just about the most gracious host in town, and Clifford Antone may be the most ebullient greeter. Between the two of them, my sister Margaret and I had a terrific time visiting with Mandy Mercier along with Lucinda and her crew... And the closing film party at Buffalo Billiards was pretty cool, too. At times it almost looked like a club on NYC's Upper West Side -- but of course, many attendees were from there, so it was no surprise. The party was also the last event in the GenArt series, featuring collections from Blackmail, RubyPearl, and Libertine...

MUSIC AND FASHION From the dashing Riverboat Gambler in the shiny silver pen-striped suit, to the señorita with her bare shoulders draped in a lacy shawl; from the ho-hum, waaay-over-with-Fred Durst look to the dime-store imitations of Lucinda Williams; from the flash of Porter Waggoner to the understatement of Johnny Cash; from the fringe of Patsy Cline to the mile-high hair of Loretta Lynn -- these were all evident elements of style at the Austin Music Awards. The love affair between music and fashion is centuries old and is as enduring as the hills that surround us. Will we never let go of the hippie look? God, you can still see tie-dye and Birkenstocks at every function. Or conversely, the black leather intellect of rock & roll that will never die ... It was all there last night at the Austin Music Hall: the drama, the sensitivity, and the carelessness of how we present ourselves and our art. It is, in fact, a marvelous cross section of exactly what Austin is: a bit of the past with a major helping of pride, a dash of creativity, and a dash of insouciance, and maybe even a look toward the future. It is pure and real, and it is all ours. The Music Awards are part and parcel of the true Austin character ... as quirky, as smart, and as fun as Austin itself.