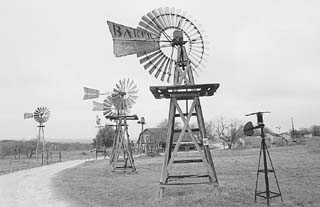 The Windmill Farm and Bed & Breakfast between Granbury and Tolar keeps history turning. The collection of wind-powered fans covers nearly a century of water-pumping technology and is one of the few private collections of windmills open to the public in Texas.

Each of the 37 windmills in the collection that lines the dirt road that snakes through the property is unique, from the elegant, all-wood Eclipse once favored by the railroads to the boxy Monitor Vaneless with blades that flatten out as the wind turns the wheel. "There were many companies that built windmills," says Chuck Rickgauer, the owner and engineer that keeps the wheels turning, "and everybody had something unique in their design."

For the graduate of the UT School of Engineering and former naval officer, Rickgauer loves the details of what makes the mills work. "Growing up in South Dakota, we got all of our water from a windmill," says Ruby Rickgauer, Chuck's wife. The windmill that powered her family farm's water pump had to be oiled once a week and turned off in storms so the wind wouldn't tear it up.

It was that same six-foot-diameter Aermotor Model 702 that began the Rickgauer's collection of towers. "It all started as a hobby," Ruby says. "My mother said we could have the old windmill, but she didn't know what good it was." Little did she suspect that Chuck would painstakingly repair the windmill, which was built around 1933.

Over the last 18 years, Chuck has rebuilt around 100 vintage windmills. Some were put back to work, but most are used for ornamental purposes. Ruby says that the Rural Electrification Administration in 1935 began the end of an era when windmills were a rancher's best friend. Water pumps were soon powered by auxiliary electric pumps for when the wind wasn't blowing. By the 1950s it was cheaper to string an electric wire than to assemble a windmill.

The heyday of the windmill came in the Twenties and Thirties. "These machines were made for people with not a lot money," Chuck says. Some models sold for as little as $40 when brand-new. A new Aermotor windmill will run about $4,000 today, Chuck says.

One of the most unusual windmills on the lot is a six-foot Aermotor on a "bent pipe" tower made of scrap iron. During the Depression, inventive farmers made horizontal windmills by cutting oil drums in half and combining them with parts from junked cars. Chuck had never seen one except in books, so he had to try building one. The distinctive barrel shape gently turns in the breeze, but looks out of place among the daisy-shaped fans.

The towers were often built of scrap metal or lumber, but the head could be ordered from the Montgomery Ward or Sears & Roebuck catalogs. The Rickgauers have a Wards Air Chief that was listed in the 1944 catalog for $47.89. Sears offered the option of having the ranch's name painted on the tail of the Kenwood-brand windmills.

Although Rickgauer has several restored models for sale, most of the windmills on the towers are part of his personal collection. The majority of the specimens in his farmyard exhibit were obtained from the Granbury area. "The companies must have had some very good salesmen," Chuck says, "because there are lots of different kinds in the area."

The Windmill Farm is open daily during daylight hours. Self-guided tours are free, although donations are accepted to help defray the cost of printing the excellent guide describing the windmills. Chuck is often available to give guided tours on request. From the front porches of the two rental cabins, visitors have a stunning view of the sun setting behind the rolling hills while the spinning wheels play a melody all their own.

To get to the farm, take TX 377 south from Granbury about five miles to Colony Road and go west about two miles. The cabins rent for $125 per night and include a homemade continental breakfast. Well-behaved children and pets are welcome. For more information, call 254/835-4168 or visit the Web site at www.thewindmillfarm.com.