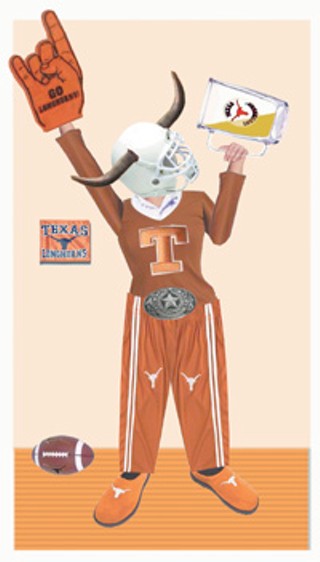 COUNSELORS STANDING BY "It's just a game," people try to explain to me when I point out that I loathe football. The allure of it is totally beyond me. You watch a game, and you can hardly tell one player from another on the team, since they all, annoyingly, have chosen to wear the same color -- locally, an unusual and unfortunate combination of white and a putrid pumpkin-pie color (which I later found out is called burnt orange) that flatters no one. Their helmets have an insignia of a cow on them ... oops, I mean a longhorn -- though one suspects the team would be more intimidating if they wore actual horns instead. On the field, they run at each other hurling balls here and there in a manly fashion and generally get all worked up. Halftime is another mystery. Scantily clad women and a marching band ... now that's entertainment. As difficult as it is for me to find any of that entertaining, it is the football fans that bear closer inspection. At my very favorite Tex-Mex restaurant, Maudie's on South Lamar, the day after Thanksgiving, the opportunity became available. What is it about football that gives license to adults to behave like drunken children on a rampage? Perhaps it's relatively safe when they're all corralled inside a stadium, but spilling into every restaurant in the city afterward, they become unpleasant, not to mention dangerous. Let's take Football Fan X, for instance, a middle-aged woman, undoubtedly with a brood of teenagers and a charming ranch-style home in Cedar Park, decked out from head-to-toe in pumpkin pie and white -- from her athletic shoes, to her plastic jogging pants, to her sweatshirt, to a really ugly hat, to her corsage, sunglasses, and beads. She greeted all new arrivals with an ear-shattering turkey gobble, jumping and screaming to her posse of over-aged delinquent friends so that the entire world could see how drunk she was. She and her friend, a plump woman wearing the same colors and a really bad perm, were so "in their cups" that when Mrs. X's friend jumped up a second time, bellowing like a hippo, "I HATE Aggies! And I HATE Miami, too!" they were ejected from the restaurant. Mr. X had been equally gregarious ... and equally badly dressed. He, of course, had also chosen the pumpkin-pie-and-white color scheme -- white athletic shoes, white running pants, pumpkin-pie shirt and cardigan, all matching the cap, the pennant, and the ... face-paint. This face- (and, more repulsively, belly-) painting is perhaps the stupidest development yet. Undoubtedly inspired by ancient warriors for whom face-painting offered sacred significance, are these current-day weekend warriors sad, or at least self-conscious, knowing that no such meaning exists for them today? The only thing that face- and belly-painting signifies about the modern football fan is that their obsession has taken an ugly turn and should be monitored by a team of licensed professionals. On that note, I'm surprised there isn't grief counseling provided at these events. Fans often become almost suicidal if their team loses. A party of 20 people at the restaurant where we supped was the most sedate and well-behaved large group around. Turned out they were all Aggies but had removed all vestiges of their association with the team -- either out of disappointment or fear that they would be detected by the rabid Longhorn fans that swarmed drunkenly around them. I was afraid, too, as were isolated tables of confused, laid-back 78704ers. But we made it out safely -- just in time to see Fan X and her permed friend being hauled off by friends after an altercation in the parking lot during which they kept screaming, "This never happens to us at Matt's El Rancho!" The most important lesson of the day? If you must go to a restaurant the day after Thanksgiving, do it early, then barricade yourself safely inside your home with plenty of water and candles. Football. It's not just a game ... it's a dangerous and disturbing phenomenon.