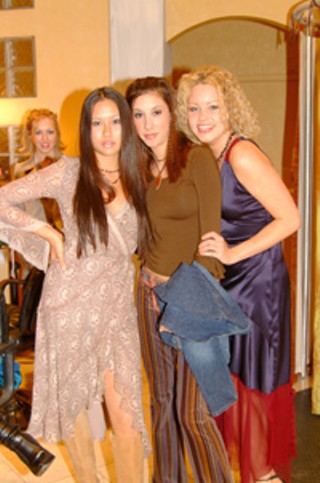 Models from the Luxe Apothetique show (Photo By chaosinaustin.com)

DEAR DIARY We are deeply into the Holiday Social Olympics ... and having to carefully chart our outfits so that we don't wear anything that has already been seen. Wouldn't it be lovely to have an enormous magnetic board on our dressing room wall with a grid of outfits and events, cross-referenced with accessories and jewelry, along with notes on whom was or who will be there? A quick briefing every morning with a skilled fashion forecaster can help prevent any sartorial faux pas. At any rate, we have sailed into the social arena girded for battle. We attended the style show at Giada (704 W. Sixth); the store is so beautiful, spacious, and graciously appointed, with the presentation of the clothes, shoes, and accessories being quite spare and elegantly minimalist. The clothes range from tastefully trendy to lavishly luxurious, always remaining ladylike. Also, the style show at Luxe Apothetique was full of charm and fun, with DJ Ro2, who incited a very appreciative audience with some great music. We were treated to glimpses of 14 outfits on a range of models. The store looked wonderful, loaded with hundreds of cool gifts. Manager/buyers Mindy Cordell and Elizabeth Kirkman have done a terrific job on the place and should have a very happy new year. We also attended the grand opening of the Straight Edge (cool store with an unfortunate name) at Davenport Village. Owned by the same guys that own Vën Shoe Salon next door, the Straight Edge offers conservatively stylish high-end menswear. As the merchandise rolls in, you can see the store gaining a real sense of itself; this could be a serious player in the retail scene. God knows we need more men's stores in town. Then we made it to a very festive First Thursday. Wet Salon was rockin' out, as was Pink Salon, among others ... and all the stores were decked with fab gift ideas. The beginning of the week was quiet, but by Wednesday, it was happening all over again. Dinner at Asti with eight of our closest friends was faaabulous. Asti owner Emmett Fox is an amazing host -- the food was excellent, the company was lovely, and the conversation was sparkling. Thursday, we spent many hours at Bella getting groomed for the holidays: lunched, massaged, hair colored, highlighted, and cut, a facial, eyebrows waxed, eyelashes tinted. Truly a wonderful experience that we'll share with you in the new year. Friday was the Chronicle's Christmas party -- it was wonderful, as usual -- delicious networking, delicious food, and delicious gossip ... and isn't that the real spirit of Christmas? Saturday night was Standish Meacham and Steven Salzman's annual soiree in their to-die-for home. They are exceptional hosts, and we held court in the library and on the roof garden this year. After three years, we're veterans! And the beat goes on...

BOYTALK As for menswear, I love Upstairs above Jezebel on South Lamar for having one of the freshest approaches around (but I hear they're unhappy with me and that makes me sad). Service (behind Güero's on South Congress) is very cool; owner Kirk Haines has a very particular and very cool sense of style in choosing clothing and gifts. John & April Lohse are always cooking up something interesting at Gomi (West Mary at South First), and Blackmail on South Congress -- where even the elves wear black this Christmas -- is loaded with fab menswear. Keepers on West 38th has style to burn, as do the more conservative Texas Clothier and Harold's. Capra & Cavelli can always be counted on for the best and most beautiful formalwear; and for style with a distinct edge, of course there's Matthew & Katie Culmo's always fabulous By George (on Lamar). The store is heaven, the clothes are gorgeous, and their current windows, featuring Carolyn Carlson's incredible chairs, are totally divoon ... and of course, there's Last Call.

GOSSIP ROUNDUP The best gossip is the gossip that I can never tell you about. It would be just too too, you know? It comes either from direct personal experience or from someone who is clawing my arm and pleading, "You can't say who told you this ..." and then proceeding to eviscerate him- or herself, spilling their entrails at my feet (or in my drink). But the top-secret revelations nag at me day and night, burning and ripping at me like a wild beast clawing to get out. But, you see my dilemma, don't you? I just couldn't make these poor people suffer any more than they already do ... or can I? We'll have to revisit this topic at a later date ... .

Poor Zsa Zsa Gabor. The 85-year-old Hungarian dinosaur, famous only for being famous (and marrying too much) was riding in a 1991 Chevy Camaro (!), driven by her hairdresser, when it crashed into a street light on Sunset Boulevard. The hairdresser escaped with minor injuries, but Zsa Zsa was taken to the hospital with serious injuries. False rumors had Zsa Zsa on death's doorway in a coma, but she appears to be back in fighting form. Her eighth husband, Frederic von Anhalt, reports that the figure of $100 million was being considered for damages in a suit against the hairdresser, citing that the "actress" could remain hospitalized for up to six weeks. It's certainly hard to imagine in what universe Zsa Zsa could be worthy of a $100 million settlement. When one considers any possible income Zsa Zsa may be losing, a decidedly smaller figure comes to mind. To lend credence, von Anhalt has now announced in ominous tones that Zsa Zsa has been warned "she may never walk again." The news undoubtedly brought an audible gasp around the world, but one suspects that if Zsa Zsa were to try the "one foot in front of another" approach, she'd walk just fine.
More After a Fashion columns