America has engaged in a long-term strategy, through three presidential administrations, to take over the Iraqi people whom we've made helpless from a ruthless form of bio-warfare. 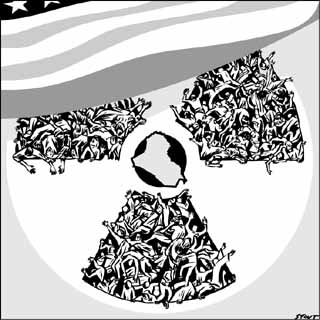 John Pilger is an Australian-born journalist and documentary filmmaker who works out of London. His reputation as an investigative reporter is impeccable. He has won numerous British, French, and American awards for his journalism and his films. The facts I am about to relate come from his recent book The New Rulers of the World. The book is well-footnoted; if you doubt these facts buy the book and check Pilger's sources yourself in a good library or on the Web.

In the Gulf War, the United States used munitions treated with "depleted uranium." Radioactive bullets and artillery shells. To be wounded by such shells means the victim (with uranium now in his or her bloodstream) will likely contract cancer or other serious diseases. Depleted uranium shells also leave lethal radioactive residue wherever they explode, creating a terrible biohazard for the civilian population. These weapons aren't designed simply to kill enemy soldiers; their purpose is to cripple entire societies. In addition, troops who employ such weapons are also their victims; with incredible cynicism, our government denies this and refuses medical care to American veterans, though many cases of "Gulf War syndrome" are likely attributable to the very weapons America put in the hands of its own unsuspecting troops. The same ammunition will be used in our imminent invasion of Iraq. As with the Gulf War, American casualty lists will not include the men and women who will lead diminished lives and die premature deaths because of the weapons our government has trained and ordered them to use.

Pilger: "The US army physicist responsible for cleaning up [radioactive residue in] Kuwait was professor Doug Rokke ... Today, he himself is a victim. 'I am like many people in southern Iraq,' he said. 'I have 5,000 times the recommended level of radiation in my body. The contamination was right throughout Iraq and Kuwait ... uranium covers the entire region ... What we're seeing now [in the Iraqi people], respiratory problems, kidney problems, cancers, are the direct result of the use of this highly toxic material ... In the Gulf War, well over 300 tons were fired. An A-10 Warthog attack aircraft fired over 900,000 rounds. Each individual round was 300 grams of solid uranium 238. When a tank fired its shells, each round carried over 4,500 grams of solid uranium. The rounds are not coated, not tipped; they're solid uranium. Moreover, we have evidence to suggest that they were mixed with plutonium. What happened in the Gulf was a form of nuclear warfare.'"

By any reasonable definition, the United States has been using "weapons of mass destruction" in the guise of "conventional warfare," and has hidden this fact from its people and its soldiers.

John Pilger went to the Iraqi city of Basra and interviewed Dr. Jawad Al-Ali, "a cancer specialist ... and a member of Britain's Royal College of Physicians." Dr. Al-Ali said: "Before the Gulf War, we had only three or four deaths in a month from cancer. Now it's 30 to 35 patients dying every month, and that's just in my department. That is 12 times the increase in the cancer mortality. Our studies indicate that 40 to 48% in this area will get cancer: in five years' time to begin with, then long afterward. That's almost half the population. Most of my own family now have cancer, and we have no history of the disease. It has spread to the medical staff of this hospital; yesterday, the son of the medical director died. We don't know the precise source of the contamination, because we are not allowed [due to the U.S.-imposed sanctions] to get the equipment to conduct a proper survey, or even test the excess level of radiation in our bodies. We strongly suspect depleted uranium ... It is like Chernobyl here ... the fish in what was once a beautiful river are inedible. Even the grapes in my garden have mutated and can't be eaten."

Pilger: "Under the economic embargo ... Iraq is denied equipment and expertise to decontaminate its battlefields, in contrast to how Kuwait was cleaned up after the Gulf War .... The United Nations Sanctions Committee in New York, dominated by the Americans and British, has vetoed or delayed a range of vital medical equipment, chemotherapy drugs, even painkillers." Pilger documents that Iraqi children in pain from cancer are treated with aspirin, and often not even that.

Denis Haliday, an Irishman who was an assistant secretary-general of the United Nations and the UN's coordinator of humanitarian relief to Iraq, resigned (after 34 years with the UN) to protest the "sanctions": "I am resigning," he wrote, "because the policy of economic sanctions is totally bankrupt. We are in the process of destroying an entire society ... Five thousand children are dying every month ... I had been instructed to implement a policy that satisfied the definition of genocide: a deliberate policy that has effectively killed well over a million individuals, children and adults. We all know that the regime, Saddam Hussein, is not paying the price for economic sanctions. It is the little people who are losing their children or their parents."

Haliday's successor, Hans Von Sponeck, also soon resigned. He too had been with the UN more than 30 years. "How long," he asked, "should the civilian population of Iraq be exposed to such punishment for something they have never done?" Pilger: "Two days after [Von Sponeck] resigned, Jutta Burghardt, head of the World Food program in Iraq, another UN agency, resigned, saying that she, too, could no longer tolerate what was being done to the Iraqi people." Pilger: "The cost in lives is staggering. A study by the United Nations Children's Fund, Unicef, found that between 1991 and 1998, there were 500,000 deaths above the anticipated rate among Iraqi children under five years of age. This, on average, is 5,200 preventable under-five deaths per month." Hans Von Sponeck said, "Some 167 Iraqi children are dying every day." [This, in a population roughly the same as the state of New York's.] Denis Haliday added: "If you include adults, the figure is now almost certainly well over a million." Pilger: "American researchers John Mueller and Karl Mueller conclude that 'economic sanctions have probably already taken the lives of more people in Iraq than have been killed by all weapons of mass destruction in history.'"

These facts rarely surface in the American media, with one notable exception. In a 1996 60 Minutes interview, Madeleine Albright, then U.S. ambassador to the United Nations and soon to be Bill Clinton's secretary of state, was asked: "We have heard that half a million children have died [as a result of U.S.-UN sanctions] ... is the price worth it?" Madeleine Albright replied: "I think this is a very hard choice, but the price -- we think the price is worth it."

Notice that Albright did not deny that U.S. policy had killed half a million children; she simply and coldly rationalized the atrocity. Saddam Hussein is contemptible, but not even George W. Bush has suggested that Hussein has murdered half a million children. We have; or rather, the administrations of George Bush Senior, Bill Clinton, and George W. Bush, have committed this crime against humanity, while doing their best to keep that information out of circulation. They think the price is worth it.

John Pilger quotes playwright Arthur Miller in what Pilger characterizes as a "charitable" explanation of why the media and the public have not been able to focus on, much less admit, these war crimes perpetrated in our name. Miller said: "Few of us can easily surrender our belief that society must somehow make sense. The thought that the state has lost its mind and is punishing so many innocent people is intolerable. And so the evidence has to be internally denied."

Pilger's view, and mine, is that our state has lost not only its mind but also its last of vestige of decency and accountability. The idea that an Iraqi child is worth as much as an American child is now considered traitorous. What makes the price "worth it"? Iraq contains 10% of the world's oil. America has engaged in a long-term strategy, through three presidential administrations, to take over a people made helpless by a ruthless form of bio-warfare, a people now ripe for conquest.

After our recent elections George W. Bush wields more power than anyone since the Emperor Augustus. America will invade and conquer Iraq. It will not matter to Bush, or to anyone in the top echelons of his administration, that American military men and women are as susceptible to the effects of uranium ammunition as are the Iraqis they attack. Our troops are as expendable as Iraqi children, so long as Iraq's oil is secured. The price, our rulers decree, is worth it, and they will stop at nothing. If you can rationalize the deaths of half a million children you can rationalize anything.