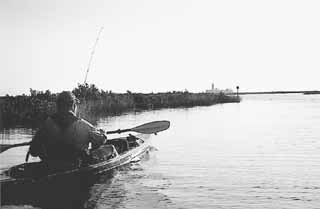 The Lighthouse Lakes Trail through the tidal wetlands between Port Aransas and Aransas Pass provides an amazing look at a coastal wilderness. Favored by anglers and explorers in kayaks and canoes, this backcountry maze of sloughs, islands, and lakes makes visitors work to experience its beauty.

From the aerial maps, the area looks like a piece of jade streaked with red and shaped like a giant triangle with the ferryboat landing to Port Aransas in the southwest corner. The boundaries of the nature preserve are the Aransas Channel, the Lydia Ann Channel, and on the mainland side is South Bay. Access is from a beach road at the Port Aransas end of the first bridge driving toward Aransas Pass from the ferry on TX 361. If you didn't know the trails were there, you would never notice the entrance. There is nothing announcing its location other than a small yellow sign with a No. 1 marking the cut between islands on the opposite side of the Aransas Channel.

Several miles of trails through the complex of channels and islands were mapped by Bill Harvey of the Texas Parks and Wildlife Department with help from Austinite Will Myers. Four trails around the estuary are marked with trail signs and GPS waypoints. Shoreline Publishing has published a waterproof, color map of the area that is essential before entering the labyrinth of channels.

The sanctuary is like entering another world, even with the oil storage tanks looming on the horizon. In some places the trail is like paddling on a creek with banks covered with sea grass and mangrove bushes. The lakes can have white caps kicked up by the wind, or they can be as smooth as an ice-covered pond. Some channels run with the current of a river.

The clear water belies the muddy bottom created by years of silt washed into the bay by the Aransas and Nueces rivers. Oyster shells litter the mud like broken glass. In some places the water is barely enough for a kayak to skim over, while in other areas a 5-foot paddle never touches the murky bottom.

All of this is prime wildlife territory. Spindly legged egrets and herons walk among the tall blades of sea grass looking for lunch, and pelicans skim the water's surface. Anglers hunt the redfish and black drum that hide in the thick tangle of mangrove roots.

For those without fishing gear, hunting for the lighthouse is part of the thrill of searching a path around the islands. Visible almost immediately after entering the maze, it towers above the grass flats. At marker 17, making your way to the structure is an exercise in physical exertion and map reading.

Built in 1853, the red brick tower once marked the entrance to Corpus Christi Bay between Mustang and San Jose islands. Besides the tower, the lighthouse station is actually four buildings with large barrels to collect rainwater off the roofs.

Before the Civil War, a small village existed across the Lydia Ann Channel on San Jose Island, which is now owned by the Bass family of Fort Worth. During the war, the Texans removed the light and blew off the top of the tower. Union gunboats used it for target practice.

The gulf current shifted the inlet further south and the Corps of Engineers helped bring the demise of the lighthouse by building the jetties two miles south at the pass between the islands. The Coast Guard decommissioned the station in 1952. The complex is now owned and maintained by the HEB grocery store family, who relit the beacon in 1988, and it is once again a navigation marker on the Lydia Ann Channel.

The environment surrounding the lighthouse is as fragile as it is beautiful. Created over centuries by sediment from river erosion, the estuaries provide a sanctuary of seawater diluted with fresh water from the rivers. When the balance of salinity is disrupted by a decrease in river discharge, then the life cycle of the coastal region is jeopardized. One trip on the backwater trail illustrates why these largely inaccessible areas are worth protecting.