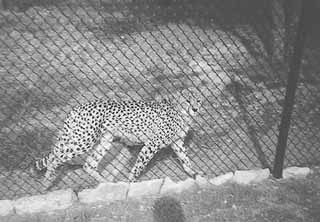 Fossil Rim Wildlife Center became a leader in the worldwide efforts to save the cheetah when it opened new facilities dedicated to the big cats. Since 1985, the drive-through animal park has been working to rescue the spotted cat from the brink of extinction.

The new Haas Family Cheetah Conservancy, which opened last month, gives animal scientists improved facilities to care for and study the cats. It also doubles Fossil Rim's capacity to 30 cheetahs. With a wild population of only around 15,000, the cheetah is susceptible to natural or man-made tragedies that could eliminate the species.

"The conservancy is very important for the world population of the cheetah," says Christine Jurzykowski, former director of the center and a continuing influence. "Twenty percent of the North American population were Fossil-Rim born."

Since the first litter of cubs was born in 1986, the wildlife park has had one of the most successful breeding programs in the world. The center is one of the few private facilities that meets the standards set for accreditation by the American Zoo and Aquarium Association. As a participant in the global species survival plan, Fossil Rim's small population of cheetahs is an important part of the gene pool.

Partially funded by a $200,000 gift from the Haas Family Philanthropic Fund, the network of cages, pens, and huts, and the research center sit on a high bluff overlooking the 1,650-acre park. Bruce Williams, director of operations at the wildlife center, says that although the cats are not very aggressive toward humans, the caretakers will have less direct contact with their charges while at the same time having the ability to work individually with the animals. The series of cages and shoots will isolate individual cats for diet, medication, and study.

From the road, visitors will only notice that the cheetahs look comfortable as they lounge under the trees in their nice, big yard. From the windows of the minivans, Fossil Rim Wildlife Center looks like your average drive-through wildlife park with hundreds of exotic animals begging along the road like Halloween trick-or-treaters. Many visitors are never aware of the impact that their admission fee has had on world wildlife conservation.

Besides protecting the population of cheetahs, Fossil Rim participates in the species survival plans for 14 endangered or threatened animals. It has also been successful in breeding the Southern African white and black rhinos, red wolves, and Mexican gray wolves, and the Brazilian-maned wolves. Every year the center releases young Attwater's Prairie Chickens back to the wild along the Texas coast.

With two veterinarians on staff and 13 animal care specialists, Fossil Rim is a leader in research of exotic animals. A recent symposium on the cheetah included a visit by animal experts from around the world. The center is one of eight major cheetah research projects outside of Africa.

A drive through the wildlife park is like taking a tour around the world. The minimum of a two-hour trip along the winding road offers a unique opportunity to closely observe more than 50 species of animals living in a near-natural environment. Herds of oryx, gazelle, and addax run across the fields like swarms of bees. The zebras walk beside the cars with a patient aloofness waiting for food morsels to drop from the open window. A trip to the park is fun and educational for all ages, and money spent is helping save the wild populations.

Fossil Rim Wildlife Center is about seven miles west of Glen Rose off U.S. 67. Open year-round from 9am-5pm, admission is $16.95 for adults, $12.95 for senior citizens, and $10.95 for children. Half-price admission on Wednesdays (April 1-November 1). The Overlook Cafe and gift shop at the halfway point of the 9.5-mile driving tour offers a good meal at a moderate price, or the shaded picnic areas are a great place to eat out of a basket. The center also offers behind-the-scenes tours, an overnight safari camp, and a bed-and-breakfast-style lodge for guests. For more information, call 254/897-2960 or visit their Web site at www.fossilrim.org.