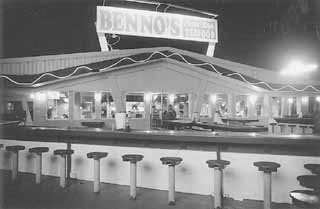 Benno's on the Beach (Photo By Gerald E. McLeod)

Benno's on the Beach

may have the best patio view of the sunset of any restaurant in Galveston. It doesn't hurt a bit that they have pretty great seafood to go along with gorgeous colors reflecting off the waves that fill the evening sky.

"People come by all the time and ask if they can just get a drink and sit on the deck and enjoy the sunset," says Mary Jane Deltz, the restaurant's manager and daughter-in-law of Benno Deltz, the Galveston native that started the Cajun/Southern fried fish stand in 1983. "We always say, 'Sure, come on in and make yourself at home,'" she added with a laugh.

Benno's is where the locals go for their fix of fried shrimp, giant French fries, and tangy coleslaw. At the northern end of the island's beach district, the unstylish restaurant with the workingman's prices is away from the main tourist area between 25th and 61st streets. It's the kind of place where residents share island hospitality with visitors. It's the kind of place where they might not know your name, but they always recognize a friendly face.

"I can't hardly go anywhere in town that I don't run into a regular customer of ours," Mary Jane says. "When I take a day off people come in and ask if I'm sick." Customers become part of the restaurant's extended family. Mary Jane has gone to more than one old-timer's funeral.

Compared to some of the older or fancier seafood restaurants in this port city, Benno's may seem to be little more than a crab shack at the end of the tourist boulevard. The odd-shaped patio juts out from the front of the building like a concrete ship's bow. The indoor dining area retains the coziness of the fast-food burger joint for which it was built.

But looks can be deceiving. If this is not the only place in Galveston where you can get a muffaletta, boudin, gumbo, and jambalaya, it surely must be the most authentic. This is Louisiana cooking at its finest. The étouffée is spicy enough to make it interesting and a big enough portion to make it a meal. You'd have to go to Lafayette to get it any better.

The menu is divided between Southern fried or Cajun spiced. Everything is served with a roll of paper towels to remove any hint of pretension. The shrimp, crabs, and oysters taste better with the salty air blowing in off the Gulf of Mexico. The all-you-can-eat catfish special on Friday nights combines small town tradition with Benno's special recipes.

Mary Jane says the blackened flounder is probably the most popular item on the menu. Right now the blue crabs are in season and lots of people like them barbecued Cajun-style -- deep-fried with special seasoning. Then it's crawfish season from November until April. "You have to try the bread pudding with bourbon sauce," Mary Jane says, "Benno makes it himself and it is really special."

Benno Deltz worked his way through the restaurant world one rung of the ladder at a time. For many years he worked at Guido's Seafood, the other legendary eatery farther south on the sea wall. His son Tracy and daughter-in-law run the restaurant while he runs the catering side of the business. "He still comes in all the time," Mary Jane says. "He loves to greet the customers and check up on us."

Mary Jane has lived on the island since she was 3 years old and can't imagine living anywhere else. "When I'm away from the island I really miss it," she says. Despite the occasional threatening storm, now is the perfect time to visit Galveston. "It gets to be perfect sweater weather," she says of the lack of any real cold temperatures.

Benno's on the Beach is at 1200 Seawall Blvd., four blocks south of where Broadway Avenue (I-45) ends at Stewart Beach Park. The restaurant is open daily from 11am to 9pm, and stays open until 11pm on Friday and Saturday. No reservations necessary, but if you're going to make a to-go order, call 409/762-4621.