What are the kids sporting in the clubs these days and what are they thinking??? 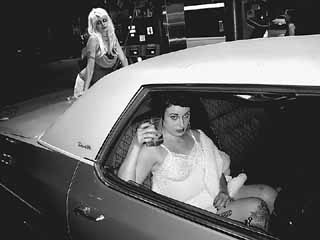 THE RANT Gee, I seem to find myself in a lot of clubs lately -- strictly studying the fashions, mind you. Most of the guys tend to look like they're wearing the same thing they wore to the lake that day, though there is the occasional notable exception. And there is the distressing propensity among the women to dress as either lap-dancers or, conversely, hippie chicks. These days, every day seems to be Peasant Blouse Day in Austin. I'm not sure if it's an official holiday or not, but it seems like every female across the city is attending some event that requires a peasant blouse. Though it's not the only look around, it just happens to be a look that arrived in Austin in 1970 and has apparently never left. Alternatively, the most entertaining look was on a gaggle of flashy babes that looked like they just didn't make the cut for Debbie Does Dallas -- lots of big hair, cowboy boots, halters that screamed, "Look at my implants, dammit!" and cutoffs cut so high in back that they became just a little denim string crawling between their butt-cheeks, causing terrible camel-toes in front. One of them did have on a really cool crocheted top, with lots of openwork and big shiny black paillettes hanging from it -- except that you could see what looked like a large white bandage underneath, presumably the result of surgery. Closer inspection revealed that it was not a bandage, but an enormous label inside the blouse. I have a little fashion tip for you ladies that like to wear openwork or sheer blouses: Cut the labels out. Nothing looks tackier on your fab little outfit than being able to read the washing instructions through it. Not to mention that -- oh, horrors! -- the labels cover up inches of skin that you could otherwise be exposing.

MAKING THE NEWS A few months ago, the Daily Record quoted Sheryl Crow saying that Britney Spears and Christina Aguilera are "... being marketed like porn stars. The images are pretty sleazy." (Though, as Cyndi Lauper said, "at least Christina can sing ....") Continued Crow, "Where do you go after you've been 19 and stuck your crotch on a camera lens in front of 20,000 people? I'm not going to put out a high-production, X-rated commercial video just to sell records." On the other hand, reports the newspaper, Crow was wearing a pink bra, hot pants, and black cowboy boots during the interview ... So, as long as we're going to diss Britney, did you get a load of La Brit's teenage dominatrix get-up for the MTV Video Music Awards? Puh-leeze. She looked like an advertisement for Leona Helmsley's House of Bondage. And those raccoon eyes? Not a pretty look for Britney -- it draws attention to the fact that if her eyes were any further apart, she'd look like a flounder... I have to say that I find P. Diddy to be pretty repellent, but in general, he dresses fabulously. At his post-party for the MTV Awards at New York's Cipriani restaurant, Mr. Diddy enforced a strict dress code. Said the invite, "If your shoes are scuffed, you're going to have a problem. If you're wearing jeans, you're on the wrong track." The invite further urges, "Think the person you marry is inside," suggesting that guests "pull out the flyest sh-t in your closet, or have your stylist pull something for you." "Fly sh-t" includes "top designers, i.e., Sean-John Collection, Gucci, Dolce & Gabbana, YSL Couture, Versace." Careful grooming was suggested for the "fellas," but for "ladies: hair-dos, waxing, manicures, and pedicures are also a must." As People magazine pointed out, the list does not reveal how the host intends to check on the waxing... Speaking of the MTV Awards, when Swedish band the Hives rocked the crowd there last Thursday, they were sporting white shoes from Austin's own Blue Velvet. The band stopped by the vintage clothing store while on tour recently and picked up several pairs of identical white shoes that are usually kept on hand for costume rentals. Says Blue Velvet co-owner Jennifer Barker-Benfield, "There are still some pairs left if anyone wants to emulate their favorite garage rockers' white-on-black mod look."

A FASHION FÊTE Omigod, last year it was a riot -- and will undoubtedly be again. It's the Designers' Guild of Austin's annual Favorite Figure of Fashion party Saturday, Sept. 14, 8pm, at Le Privilege (912 Red River, 476-4441). Featuring music from DJ Sliver and DJ A-Trak, the event will feature a costume contest as well as a silent auction. Come as your favorite fashion icon -- last year's highlights included John Galliano, Anna Sui, Karl Lagerfeld, Grace Jones, Twiggy, and Dale Evans -- but do come in costume or dress creatively. Tickets ($10 general admission and $20 VIP) can be purchased at Blackmail on South Congress, 326-7670 or Vylette in Davenport Village, 347-7878. For further information contact Neil Diaz at nosnatas1@aol.com.