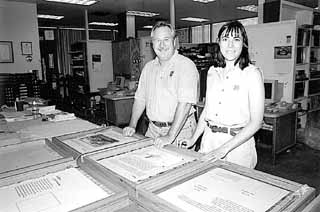 Lyndon B. Johnson State Historical Park, west of Johnson City, honors the diversity of the Hill Country as well as the life of the 36th president. A new exhibit installed by the Texas Parks and Wildlife Department ties the land, the people, and the man together in an educational and entertaining experience.

"We're filling in a gap in the story of Johnson's life," says Julie Coombes, the TPWD researcher who coordinated and wrote the exhibit. A controversial and charismatic leader, Johnson is one of the most documented presidents in our history. The National Park Service tells the story of his life as a boy in Johnson City and as rancher on the Pedernales River. The LBJ Library documents his political service.

What was missing was the story of the land and the people that influenced the president. "We tried to do the exhibit almost like a scrapbook," says Wally Reinhardt, manager of the TPWD Exhibition Shop. "Instead of a family history, it's the story of the Hill Country."

Despite its beauty, the rolling hills of Central Texas were a difficult place to settle. The thick grassland hid a thin soil that was fragile at best and unforgiving at its worst. Reinhardt quoted LBJ biographer Robert Caro as saying, "The Hill Country was a trap baited with grass." The land helped shape the people who inhabited it.

The harshness of the environment didn't stop Native American, Spanish, Mexican, Southern Anglo, German, and African-American immigrants from trying to scrape an existence out of the rocky soil. The cultures came together in a big melting pot of scrub oaks and temperamental streams to form a unique culture called the Hill Country.

Replacing displays on the president that were installed at the state visitor center when it opened in 1970, the new exhibit offers hands-on learning experiences as well as murals, old photographs, and artifacts.

Reinhardt says the Exhibition Shop has learned that audio clips can enhance the story for all visitors. This exhibit includes oral histories as well as quotes from Johnson. The richness of the material available makes the final product engaging for all ages.

More than 15 different museums participated in assembling the material, Coombes says. She also contacted four Indian tribes for contributions. The exhibit documents how all of the people in the area lived, where they went to school, what they ate, and how they interacted.

Sam Ealy Johnson Jr., the president's father, once said, "You can tell a man by his boots and his hat and the horse he rides." Included in the exhibit are Lyndon Johnson's Stetson hat, Dan Post boots, and a saddle from the ranch. The section on the president and Lady Bird ties it all together by showing how the two were affected by the environment and culture of the Hill Country.

During his public service, Johnson helped pass legislation that benefited the minorities who had shared his youth. The president's wife, Lady Bird, has often been called "the shadow secretary of the interior" for her conservation and beautification initiatives while in Washington and after returning to Austin. At the end of the exhibit the visitor is left standing at a large window looking out over a field of native grasses and flowers. It is no coincidence that a hiking path invites guests to further explore the land that inspired the Johnsons.

Lyndon B. Johnson State Historical Park is a short hour's drive west of Austin on U.S. 290. Besides the visitors center, the National Park Service operates tours of the Johnson ranch headquarters on the opposite bank of the Pedernales River for $3. The state also maintains the Sauer-Beckmann Farm next door to the park as a living history site where park employees re-create Hill Country farm life of about 1915. The park has a swimming pool, tennis courts, and baseball field.

The exhibit officially opens on August 27, what would have been Johnson's 94th birthday. During the day the tours of the ranch headquarters will be free. A special tour at 10am will include the laying of the wreath ceremony at the president's grave, attended by Johnson family members. For more information on the park, call 830/644-2252 or visit www.tpwd.state.tx.us/park/lbj/.