A vulture found a dead Hereford bull in a pasture and picked it clean. When he was full he was so happy that he let out a guttural roar that attracted the rancher who rode up and shot the bird. The moral of the story: Keep your mouth shut when you're full of bull.

One of the most common birds in the state, vultures are often misunderstood and admired even less. Not only do they have a disgusting diet of rotting meat, but they're not particularly attractive either.

Seeing a group of vultures circling overhead shouldn't be cause for alarm, though. According to John Maresh of the Texas Parks and Wildlife Department's non-game bird division, the big, black birds with the sunburnt heads don't have much of a sense of smell. Rather than forecasting some impending doom, the birds ride the hot air thermals in circles looking for a motionless meal.

The lack of olfactory facilities would definitely be a desirable trait when your primary job in life is cleaning the nation's highways and pastures. In fact, that bald head is an advantage over a feathered crown when it comes to cleaning up after sticking its head in places too disgusting to mention or imagine.

The bald head is one of the identifying features of the two types of vultures resident to Texas. The correct term for the large scavenger birds is vulture, not buzzard. The only buzzards are large raptors in Africa and a few lawyers. In Texas there is the black vulture with its trademark featherless black head. In flight they are recognizable by the white-tipped wings that are kept level with the body when not flapping. The Audubon Society guide to birds of North America lists their mature wingspan at around 24 inches. More prevalent in the southeastern states, the black vulture's range extends from South Texas nearly to Maine along the eastern seaboard.

The turkey vulture, with its recognizable red head, makes up 60% to 70% of the vulture population in Texas, said Maresh, a conservation scientist. The birds can grow to a wingspan of 32 inches, still a far cry from the 12-foot wingspan of their now-extinct Ice Age cousins. In flight the turkey vulture can be identified by the light-colored feathers on the underside of the wing and the way they hold their wings in v-shape while soaring.

Vultures do a lot of soaring. Maresh says they can catch a summer thermal and ride it for hours and miles. "It's a myth that they circle something dead because they can smell death," Maresh says, "They have no sense of smell, but do have very good eyesight."

Not particularly strong flyers, some vultures migrate during the year looking for less crowded roadside dining, but most find an area they like and stick with it. The turkey vulture ranges all over the United States and into southern Canada with concentrations of the birds around cities. "We provide them lots of good stuff to eat," Maresh says.

Like the annoying grackles, the vulture has adapted to humans and their structures. When you consider that they have a sharp beak designed for ripping flesh, it is fortunate that their main diet is carrion. Pets and small children should breathe a sign of relief, because the birds never attack live prey. They are actually quite docile, if not shy, and smelly birds. In the Rio Grande Village in the Big Bend National Park, they have been known to strut around picnic tables begging for scraps.

In the winter months the vultures congregate in large groups around Central Texas. They particularly seem to like the power line towers at the junction of MoPac and Loop 360 near Barton Creek Square Mall, probably because it is close to the creek, there is no shortage of roadkill in the area, and nobody bothers them, Maresh said. During the summer months they tend to spread out more.

Spring is nesting season for both species of vultures. They communicate with hisses, grunts, and a display of their sizeable wings. Rock ledges and hollow trees provide their favorite nesting spots so it is remarkable that more birds don't find the ledges around buildings a pleasing place to set up housekeeping. They usually have two or three offspring. The babies are little white fluff balls with ugly black faces, Maresh said.

Protected from hunting under the Migratory Bird Act, the great horned owl is about the only creature that might attack a vulture, especially the young. The vulture's main defense is to puke and poop on the attacker. Occasionally, if a car startles a bird while he is having a roadside snack, Maresh said the bird will leave a calling card behind as he flies away. 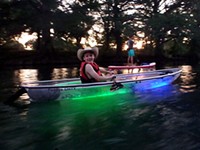