Is hair there and everywhere? Do the Eighties give you the Shiverz? And who's got Anthony's Nak? Read inside to see! 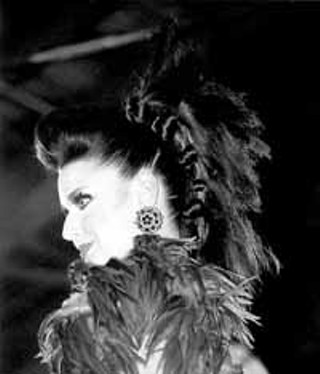 Evening glamour in an updated Mohawk from Salon 505. (Photo By Karen Sopko)

A HAIR-RAISING EVENT Well, the Dream Team from Aziz Day Spa & Salon has done it again. Aside from their wonderful establishment, the work they're doing for charity is making a big splash. Last year's Cut-a-Thon, in which they brought together a number of stylists from different salons, raised a tidy sum for the Leukemia Society. It was a great success and spawned this year's first annual Style Cup, held last Sunday at Element, to benefit Project Transitions. With cooperation from Avant, Topaz, Innu, Avalon, Salon 505, Catena's, and, of course, Aziz themselves, the event was a riot of wonderful hair, make-up, and clothes. There were four categories of competition and many runway surprises. With a panel of celebrity judges including Bo Chase from 107.7 the End, News 8's Denise Menard, Michael Olivier, who scouts for the Dallas Cowboy Cheerleaders, 93.3's Miss Kitty, and moi (of course!), the show was a non-stop treat for sore eyes. In the "Day Fun" segment, Avant took first place with an amazing creation of hair spilling over the top of an enormous picture-hat. For the "Warm Evening" segment, Salon 505 took top honors with a magnificent model in totally stunning hair and a divine chartreuse gown (courtesy of the fabulous and generous St. Thomas boutique). The honors for the "Spring Bride" segment also went to Avant; Roy Fredericks' team is deeply gifted and knows how to put on a show. The "Fantasy" segment was won by Salon 505, with a drop-dead fabulous hair creation and exquisitely designed and applied make-up. "Best of Show" went to Salon 505 for their overall approach, though it was also a very tough choice. Unfortunately, there were no honorable mentions, even though only two salons took all the awards, there was incredible work from other contestants. Aziz sent out, among other amazing entries, a trio of models in pastel colors, decked to the nines, each of them with a poodle dyed to match. Truly dazzling. Also notable was Catena's, who had a very vocal fan club present. Sorry, we've never heard of them before, but they did some absolutely beautiful work that was overshadowed only by the showmanship of some of the other salons. Same was true with Innu; they showed a great deal of real hair, which, though spectacular, paled next to some of the other showier entries (extensions and applied hair ruled the runway, and perhaps next year, real hair should be a category all its own). Topaz also deserves praise for the imaginative styling and obvious hard work that went into their entries. This was a fabulous event, promising to snowball into a major annual event, and Aziz is to be congratulated for their vision, hard work, and generosity. Good work all the way around. See you next year, guys!

HONORABLE INTENTIONS I certainly meant no harm, but immediately after the Anthony-Nak mention in last week's column, I received an e-mail from them that read, "You know we have always been so grateful of the coverage you have given us in your column. Just to set the record straight, at this time we have no arrangements for a retail store in Austin. We have spoken with Amy Weaver about the possibility of opening a retail store in a number of places around the country and have not settled on where or even if this venture is a solid one. As of now, there are no firm commitments on anything. We have no arrangements with Davenport Village. Again, thank you for your coverage, and we hope that you will continue to consider us a strong supporter of your work. We would appreciate it if you could print something that would help set the record straight." So here it is, boys -- sorry if I jumped the gun. BAD HAIR DECADE No sooner did we hear that the tousled ringlets La Britney wore to the Grammys set the world on fire (who's world? Not mine ...), then it was announced that Britney prefers a more casual tramp-next-door style, like the one she wears in her movie Crossroads. In AOL's Beauty and Fashion section, there's an article titled, "Britney's New 'Do: For her movie Crossroads, Britney Spears is sporting a more subdued, girl-next-door look, and we know how to get it." Well, after looking at the photo, I know how to get that 'do, too. Grab a hunk of hair in back (but be sure and miss lots of it) and shove a $1.98 clip on it. The 'do may be new for Britney, but it's already the 'do of choice for millions unimaginative women across the globe.

THEY GOT THE BEAT I've always been a fan of girl groups, and it's always fun to have a new one to talk about. Shirley & the Shiverz are sassy, smart, and stylish, and their raucous, retro/edgy debut video "Cowbell" (directed by Tim Norfolk) takes the viewer on a fast ride down a bumpy highway. Mixing the hard-edged glamour of early Blondie with the sheer pop appeal of the early Go-Go's, the Shiverz tread the line between sleek New Wave and in-your-face punk. My favorite part is they don't seem to feel the need to make some obscure statement by wearing unattractive clothes, make-up, and hair. They look great, and have style and attitude to burn, and can be seen Friday, May 3, 8:30pm at Emo's Pop Fest. Be there or be Cher.