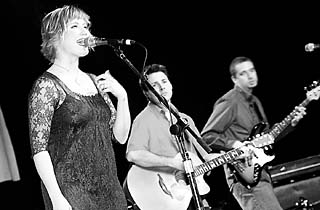 SCENE AND HERD Was that really Robbie Robertson yakking all the way through the Norah Jones set at the Clay Pit? (Probably finishing his keynote address from Thursday)... John Sayles' partner, producer Maggie Renzi, is having so much fun with music that she extended her stay through Friday... What talent-free musician (who has glommed onto the entourage of the talented Bootsy Collins around town and once claimed to have been a protégé of Keith Richards) thinks he's very long overdue for a Chronicle cover story? Yeah, right, and maybe UT will change its mascot to a maroon & white gerbil... Swung by Steve & Lisa Dean's party at the Texas Cafe (formerly their retail space Under the Sun); the rockabilly music was great, the service unbeatable, and the charm was bountiful -- but then, that's what we expect out of Steve & Lisa... Then over to Randy Franklin & Jann Baskett's party at Yard Dog -- this is one of the most famous alterna-parties of SXSW, and we had so much fun, we returned for their Bloodshot Records party. This is one of the most stylish parties around: always a mix of vintage and new, edgy yet familiar, and with style to burn. Plus, the party always wins my award for having the cutest boys and prettiest girls... Briefly stepping into Antone's, we caught something called the Drive-By Truckers; it was like stepping into a time machine that took us to some nebulous world populated by the mutant children of the Ramones and Molly Hatchet -- Yikes!... Chatted at the trade show with both Ed Ward and Dave Marsh -- though the former Creem staffers did not chat with each other. Ed refused to share any information with me, saying only, "I wish I could help," as he walked away. Dave was much chattier giving his recollection of the now-fabled melee backstage at the Austin Music Awards involving my sister ... It is not true that I was wearing sunglasses at the Music Awards because I was covering up a black eye. I was wearing them because I haven't recovered from my complete eye- and facelift ... At the Music Awards show was a retinue of aging punk rockers from the Raul's/Club Foot era, including Grant Edwards (aka Skip Seven of the Next), Jon Dee Graham (the Skunks), E.A. Srere (the Chickadiesels), Brad First, Dottie Swenson, poster artist-turned-Nashville-attorney Nels "Jagmo" Jacobson, and Shona Lay (Standing Waves), not to mention my sister Margaret "Right Hook" Moser. Maybe they could form a new band and call it Grecian Formula.

SAY IT ISN'T SO, SIXPENCE! Speaking of Margaret, a twisted version of her backstage Awards Show fracas was erroneously reported by Michael "Corky" Corcoran in the Austin American-Statesman. According to Corky, Margaret got into a brawl with a "wife of a band member." The rumor further mutated on the street that it was Leigh Nash, lead singer of Sixpence None the Richer, who tussled with La Mos, with much hair pulling and screaming in between whacks. "Not so," says Margaret, putting the kibosh on the story that the contretemps involved anyone from SNTR. "Sixpence played a great set, and I loved them."

As long as no one wants to hear the real truth, we'll just fabricate a story of our own: It wasn't Leigh Nash that Margaret got into the fight with. It was diva Toni Price, who demanded four deluxe suites at the Four Seasons, 20 dressing rooms, each stocked with flowers and a full bar (of course), 24-hour catering, a clutch of limos at her disposal, and full-time "child care" for the menagerie of animals that she insists on traveling with (including a full-grown water buffalo). Seems that Toni mistook Margaret for her maid, Birdie, and ordered Margaret to fix her a double vodka & tonic with no ice and no tonic. After the fifth V&T with no T, Toni became shrill and ordered "Birdie" (Margaret) to clean up the dressing room. Margaret, wary of mussing her Diane Von Furstenburg dress, said, "Toni, we'll have the staff clean up afterwards. Why don't I get you something to eat?" When Margaret returned with the food, Toni innocently bumped her sending food flying all over Margaret's dress. Scraping the sesame chicken sauce out of her eyes, Margaret mistook Toni's tipsy offer to help as another attack, and defended herself by yanking the diva's hair. Toni screamed and boxed Margaret's earrings right off her head. They tussled on the floor while Jimmie Vaughan and Dave Marsh cheered them on. After an eternity, the security staff separated them -- the girls got a good look at each other, burst into hysterical laughter, and managed to get Toni onstage for her finale.

And if you believe that, I have some Enron stock to sell you...