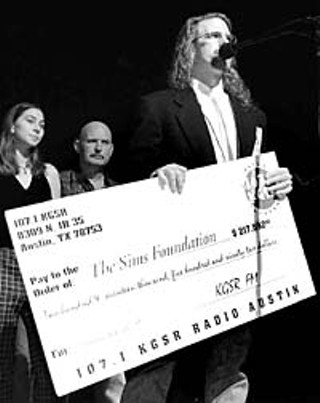 THE YELLOW BADGE OF COURAGE Here in Austin, the accessory of the season, of course, is the omnipresent badge, a very important fashion feature of SXSW. It is clearly evident that a lot of thought goes into choosing colors for badges and lanyards to guarantee that they will clash with any outfit you choose. Needless to say, only the platinum badge works with most outfits -- its silvery palette blends nicely with everything except gold jewelry. But who could overcome an orange and blue lanyard? I'll reuse my black one from last year, thanks. At the Chronicle's Austin Music Awards, the stick-on badges (which were another problematic color: turquoise) were presented in a hundred creative ways ... stuck on legs, arms, backs, derrieres, and even foreheads. Music scene Chronicle-er Ken Lieck solved his fashion conundrum by wearing dozens of different badges and lanyards, ensuring that at least one of those garish colors would tie his outfit together. Aside from the fact that the folks at SXSW registration performed miracles in getting my badge made so quickly, I was distressed that the photo I had sent in disappeared. We were forced to take one on the spot. What a mistake. The new photo makes me look like an elderly man with a long beard and cold cream on his face. Not exactly the glamorous shot I want to wear around on my chest for the next 10 days. Next year, I'm hiring a stylist.

TRASH OF THE TITANS While at the Music Awards, I realized I was missing Tonya Harding duke it out with Paula Jones on Celebrity Boxing. Dammit! Paula Jones (who probably knows a lot about warding off unwelcome advances) was a last-minute replacement for Amy Fisher, who exited the show for reasons unknown. The theme must have been "Tramps & Tyrants." I think that pitting these kinds of "celebrities" against each other in a boxing ring is a fabulous idea, and whoever thought of it should win a Nobel Prize. Imagine: The Battle for the Lamest Singer: Britney Spears vs. Mariah Carey; No, I'm the Biggest Lesbian: Rosie O'Donnell vs. Ellen Degeneres; My Boyfriend's More Famous Than Yours: Jennifer Aniston vs. Penelope Cruz; Battle of the Washed-Up Child Stars: Macaulay Culkin vs. Leonardo DiCaprio; Battle of the Bones: Calista Flockhart vs. Lara Flynn Boyle; Queens of Multi-Medea: Diane Downs vs. Andrea Yates ...!

Queen for a Night: Margaret Moser basks in the spotlight at the Austin Music Awards. Dress by Diane Von Furstenburg, hair and make-up by Pink Salon, jewelry from Blackmail, fragrance by Nina Ricci. (Photo By Bob Sherman)

Which brings us closer to home (we bet you were wondering how we were going to tie this into SXSW): Star With Musical Pretensions ... errrr, Aspirations Who Comes to Town a Lot: Dennis Quaid vs. Russell Crowe; Battle for the Biggest Trend: South Congress Rockabilly Girls vs. the Elysium Goth Girls; Battle of the South Austin Mayors: Eddie Wilson vs. Danny Young; Battle of the Blues Babes: Toni Price vs. Lou Ann Barton; Director Who Brings the Most Stars to Austin: Robert Rodriguez vs. Rick Linklater; Battle of the Bald Photogs: Bob Sherman vs. Todd V. Wolfson. Okay, enough!

FASHION FAUX DUH! Dallas-based band the Polyphonic Spree, who played the prelude music for Robbie Robertson's keynote address, also performed at the P2 Barbecue. In a very conceptual piece, the 25 members appeared on a lawn wearing white robes. Perhaps they hadn't thought through their wardrobe options very carefully. In this neck of the woods, standing on a lawn in a white robe is generally associated with little pointy hats and flaming crosses.

GLADIAT ... WHO? OR CUTEST COUPLE? It was a real coup for SXSW to snag Russell Crowe to introduce his band's epic documentary Texas. Even the guv showed up. Yup, there was handsome Rick Perry in -- somewhat of -- cognito (you couldn't fool us in that ballcap!), sitting all alone in an aisle to himself, that is until hunky Russ plunked down next to the Texas top dog after the film was introduced. There they were, Rick & Russ all cute and cozy and snug as a bug in a rug. Hmmmm ... is it just me, or was anyone else curious as to the proximity of their dates?

BLIND LEADING THE BLIND Which local diva entertained a troupe of young men in her hotel after a recent show, demanding that she be bound and sacrificed like a mythical virgin? ... Which handsome and, uh, gifted club owner's solo porn video has been making the rounds and leaves both males (and females) breathless? ... What salon owner's double-gaited ways are the consternation of all his boyfriends and girlfriends ... not to mention his wife? ... Which skin-care specialist puts a new spin on the term "Examining Room" ... so that's what all those lotions are for! ... Which band manager's private video collection could raise a lot of money if it were put up for sale, especially the shots starring a famous local "sister-act"? ... Which local actress' shoplifting proclivities would put Winona Ryder to shame? ... Which of these items is not true?

HOSTESS WITH THE MOSTEST Portland, Ore.-based Pennie Lane, the former groupie deluxe who put a new spin on the phrase Hardest Working Woman in Rock & Roll, is currently a publicist for, natch, rock bands. The gregarious and infamous Miss Lane is back in town to host the Southwest Wholesale showcases at the Hard Rock Cafe. The showcases also feature Jackson, Miss., native Caroline Herring (who won "Best New Band" at the Music Awards) and Patrice Pike (who performed in the Supergirls' set at the Music Awards).