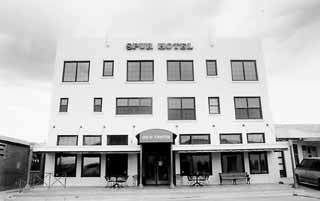 The Spur Hotel in Archer City provides a comfortable night's lodging that offers more in the way of atmosphere than in luxury amenities. The 74-year-old, three-story building exudes small-town charm from every squeaky step and stuffed deer head.

The quiet little town 25 miles south of Wichita Falls was made world famous by Larry McMurtry's books and the movies The Last Picture Show and Texasville. After the oil boom went bust in the county, McMurtry returned to his hometown to open a chain of used bookstores, and the town found a new industry.

Sitting on the bench on the front porch of the Spur Hotel watching the traffic on TX 79 stop at the only red light in town is like stepping back in time. Across the street the antique shop looks a lot like Sam the Lion's pool hall in the first movie.

The building in the Oscar-winning movie was next to the antique shop, but was demolished by the owner soon after The Last Picture Show's release in 1972. "The movie was a huge conflict in Archer City when it came out," says W.C. "Abby" Abernathy Jr., owner of the hotel and several other businesses. Some, including his father, felt the movie and especially the book made the town look like sin city, he says.

There aren't many landmarks left in town that were identifiable in the movie. The hotel never appeared on film, although crew members did use the building. The legion hall where the dances were held is now a bar on the highway east of the courthouse. The house that Cloris Leachman lived in was in the nearby town of Holliday. Only the marquee and a part of wall of the Royal Theater remain. Abernathy owns that, too.

The theatre where much of the action happened in the movie burned long ago. Abernathy bought the property in 1986. The theatre was too far gone to revive, so he moved it into the store next door, leaving the familiar rock façade as a reminder of the Oscar-winning movie.

Of all of the events that keep the theatre busy, one of the most successful has been the "Late Week Lazy Boy Supper Club" on the third weekend of the month from January to May and August to November. The sellout crowds enjoy an intimate evening with singer/songwriters like James McMurtry (Larry's son), Steve Fromholz, and others. It started as a fundraiser and is now in its sixth year, he says.

Abernathy is perhaps his hometown's biggest booster. Several years ago when he moved to New York to pursue an acting career he had to resign from nine civic committees. He is back on several local committees as well as a commissioner with Texas Commission for the Arts.

Although the 40-year-old, fifth-generation Texan bristles at descriptions like "Renaissance Man," he is a multitalented guy. Raised on the Abernathy Ranch west of Archer City, he learned several trades at an early age in addition to spending nearly a decade working as an actor. "I didn't make much money, but I learned an awful lot," he says.

His furniture design business allows him the freedom to pursue pet projects. "Our specialty is iron beds, but we'll do anything from beds to barns," he says. Another project in the works is a documentary of the Royal Theater.

Abernathy and his sister bought the Spur Hotel in 1990 for an office, but then decided to make use of the extra room. The building was stripped nearly to the stone walls. The lobby was expanded and Abernathy designed and built the fireplace in the Longhorn Room.

The hotel was originally called the Andrews Hotel. It was then known as the Archer Hotel until the name was changed to the Spur Hotel in the Fifties. During the 1960s a variety of businesses were housed in the building until the Abernathys remodeled it. A second renovation gave the rooms a more frontier luxury feel.

Also added was a stuffed black and white rooster that watches over the lobby from its perch on the banister.

The Spur Hotel is just right for small groups or couples. Several caterers are available in town to provide food that is missing from the local dining experience that consists mainly of the Dairy Queen and the new Sonic Drive-In. For more information call the Spur Hotel at 940/574-2501. For information on the Web, go to www.spurhotel.com or www.archercity.org.

The Last Picture Show will play in Archer City for the first time during the 30th anniversary celebration, April 4-6. Leachman will receive a lifetime achievement award during the festivities and Jeff Bridges and Cybill Shepherd are rumored to also attend.