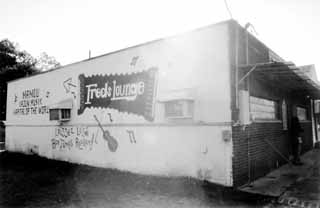 Home of the Cajun boogie (Photo By Gerald E. McLeod)

Fred's Lounge in Mamou is more than the Cajun Music Capital of the World. The village on the Louisiana prairie is the spiritual center of the universe for anyone who loves the foot-tapping tunes played by bands built around an accordion and fiddle player and Fred's is the epicenter.

On the surface, Fred's place looks like any ordinary red brick beer joint. But promptly at 9:15 on Saturday mornings when announcer Mark Lane steps to the microphone on the makeshift stage roped out of the center of the dance floor, Fred's Lounge becomes the most beautiful place in the world. With a hearty laissez les bon temps roulez, Lane ignites a two-hour radio tradition that has played on KVPI (1050AM) out of Ville Platte for more than 55 years.

Fred's Lounge rarely advertises, yet the pub that is open only on Saturday mornings is known worldwide. "We always ask people how they heard about Fred's," says Libby Gillory, who has owned the bar with her husband David for the past five years. "People from England say, 'I don't know, everybody just knows about Fred's.' We get a lot of folks that come from Australia. That just kills me. That's a long way from here."

The history of Fred's Lounge is intertwined with the story of Evangeline Parish. After World War II, the Cajun culture that had been an important part of the farming communities of south central Louisiana was quietly fading. It was hard to keep the former soldiers on the farm once they saw Paris.

One of those returning to the village of Mamou was Alfred "Fred" Tate. On November 20, 1946, he purchased the old bar on Main Street in the middle of town. It was nearly an instant success. It was at Fred's bar that the Courir de Mardi Gras was revived by Fred, Revon Reed, and Paul Tate.

"In the 1950s, people got together and saw that the Cajun culture was going away," Libby says. "Mamou has a very traditional Mardi Gras. Our celebration is totally different than in New Orleans. Our celebration is held on horseback where they go out and collect food for a gumbo and then have a big dance after the meal."

Mardi Gras weekend leading up to Fat Tuesday (February 12, 2002) is the only time that Fred's Lounge is open Friday and Saturday nights. It wasn't always so. When Fred Tate ran the joint it was open seven days a week. The late Revon Reed, a regional author and celebrity, started the live radio show in 1962. As his health began to fail, Fred kept the lounge open with the help of his ex-wife Sue on Saturday mornings to honor his commitment to the radio program.

When Fred passed away in 1992, Sue continued the tradition while working as a legal secretary. "Sue is Fred's," Libby says. "She is the spirit of Fred's. She is tante [aunt], I don't know how else to say it. She is the epitome of Fred's."

At 70 years old, Sue Vasseur is known worldwide as Tante Sue de Mamou and continues to manage Fred's Lounge. "Sue is quite a legend and worthy of it," Libby says. "Many people come to Fred's just to meet her. She is a wonderful ambassador for our culture."

It is hard to imagine Mamou or Fred's without the white-haired grandmother with a soft accent and a friendly smile who has never met a stranger. "She takes care of everybody," Libby says. "Her community work is amazing." Last year Mamou held "Tante (pronounced tantu) Day" in her honor.

Libby and David Gillory purchased the lounge from Fred's two daughters in 1996. Tante Sue came with the deal, and they're glad she did. Both have day jobs, she's a teacher and he's a construction consultant. Fred's is their retirement plan.

Although you can hear local music programs across the radio dial in southern Louisiana, Fred's Lounge is unique in many ways. "For one thing we serve alcohol at eight in the morning. Even for us Cajuns that unique," Libby says with a laugh. She recommends starting with a spicy Bloody Mary. "That's our breakfast. We call it 'Fred's omelet.'"

Information about Fred's Lounge is available on more than 200 Web sites with fan clubs around the world. Beginning Jan. 1, 2002, they will have their own site at www.fredsinmamou.com. Until then you can learn more about Fred's at www.lsue.edu, or listen to broadcasts at www.louisanaradio.com. Fred's is open only on Saturdays from 8am to 2pm with the music happening from 9am to 1:30pm.