Let us not forget the reason for the season, people … club crawls and parties! 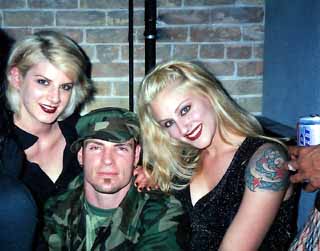 THE SOCIAL OLYMPICS ... officially began last Friday. The kick-off was a Christmas party thrown by Gomi, Creatures, and Turntable Records on the corner of W. Mary & S. First. Turntable owner Thomas Hernandez offers much for the serious music collector -- rare and obscure hard house, trance, and hip-hop titles, with great retro dance music on used vinyl, coupled with the vast selection of international CDs. Hernandez's late father founded the beloved Golden Slipper Shoe Repair, also in that same enclave. John & April Lohse were dishing out the drinks at Gomi, spreading holiday cheer. Creatures owner Laura Maxwell had a great spread of holiday refreshments that she made herself -- that's in addition to the wonderful merchandise (shoes by Fluevog and Steve Madden!), and I phoned in my Friday night fashion report to Miss Kitty at Mega 93.3 from Creatures... Then it was off to the annual Chronicle holiday party, held at the American Legion Hall off MoPac (which I refer to simply as "Tara--). This party is always packed, with a staggering assortment of Austin fixtures, copious amounts of food and drink, and of course, the main draw -- the karaoke extravaganza masterminded by Kate Messer, this year featuring a lovely birthday tribute to publisher Nick Barbaro... Then we went to my favorite party so far this season (and, well, honestly, last holiday season too!), Standish Meacham and Steven Salzman's dazzling affair at their swanker-than-swank Castle Hill home. This is the same party I refused to miss last year, even though I could hardly walk due to a back injury; I found myself wondering if the visions of glamour had something to do with my painkillers. The party proved to be equally as glamorous this year, sans pills. Exquisite food, lavish drinks, and divine entertainment (by legendary Margaret Wright) are sure to win Standish and Steven a gold medal. We rubbed shoulders with the esteemed Ann Richards, Nancy Scanlon, architect Jay Farrell, and others too fabulous to mention. One of my favorite guests was noted interior designer Chas. B O'Docharty (aka Carlos) who sidled up to me and said, "So, darling, did you have to crash the party again, or did you get an invitation this time?" Then it was off to Club DeVille (where Emily and Lana treat us like queens), followed by Le Privilege (thanks, Sammy!), Ocean's 11 (bartender Jason is simply one of the best), and, finally, Texture. Needless to say, Saturday night, we were feeling none-too-lovely, but attended the Christmas affair put on by Steve & Emily Wiman, of Uncommon Objects. Our arrival was conspicuous for a number of reasons, not the least of which was the taxi we arrived in, emblazoned with a large ad for Hooters (I told Yellow Cab that I wanted a taxi with Versace on top!). I feared the guests might have expected us to be wearing tight T-shirts tied up under our busts.

BEAUTY BIZ Popular fashion magazine Lucky is dedicated strictly to shopping, and Senior Consulting Editor Gigi Guerra (originally from Fort Worth) has just put together an Austin shopping guide, to be run in March, just in time for SXSW... Speaking of fashion mags, it's hard to pick one up without reading about Botox Treatments -- you know, where they inject you around the brow, eyes, or mouth with minute amounts of a toxin that paralyze you, leaving you looking fresh and youthful and wrinkle-free? Well, I've seen it myself now (no, I didn't have it done ...), and it's amazing, though hard to pinpoint exactly what's different about that person's face; they just look indescribably softer, smoother, and younger. Now, if they only offered it for other body parts ... a "Buttox Treatment," perhaps?

THE SPY GAME Spygirl Christina Klisanin rubbed shoulders with Ani DiFranco at Güero's last week -- standing by her at the entrance, Christina thought, "Could it be?" Sure enough it was, and DiFranco was very sweet and gracious in her acknowledgement. Güero's certainly seems to attract every celebrity who passes through, and there sure are a lot of them lately, aren't there?... Not seen at Güero's, but definitely spotted elsewhere around town, was Eighties anomoly Vanilla Ice, who invited a large conginent of women to meet him at the Chili's on 183. For some reason, a number of local lovelies heeded his call, and I have the names of three of them: Catherine Swanson, Monica Thompson, and Farah Carter. Mr. Ice, known far and wide for his high standards of taste and elegance, invited them all to accompany him to "some club" up in Round Rock. They went. He then decided to turn around and go right back to Austin, at which point he invited Ms. Swanson to dump her cutie pie boyfriend and party down with him at the uh, ultra-swank La Quinta. At one point, fear swept through the writhing throng as some of Austin's finest boys in blue passed by the very ... ahem, fragrantly "hemp-y" Vanilla. Fearing their hero's imminent incarceration, the group breathed a collective sigh of relief as the peace officers merely wished to secure Mr. "Ice-Ice-Baby"'s autograph.

FALLING STARS Omigod, poor Winona Ryder. I love Winona: She's magnificently beautiful, deeply talented, dresses fabulously ... and is in some very hot water after she was arrested at Saks Fifth Avenue, Beverly Hills, where she allegedly tried to shoplift nearly $5,000 worth of merchandise. Apparently there is videotape of the Oscar-nominated actress removing the sensor tags off the merchandise, and when she was arrested, she was reportedly charged with illegal possession of prescription drugs. I think we can safely assume the pills will become a major part of her defense ... that the combination of drugs she had taken for ____ (fill in the blank: stress, depression, kleptomania ...) rendered her unable to make good judgment calls. Fortunately, even if they do send her to the big house for her crimes, she has a divine figure and will look wonderful in stripes.

THE CLAUS THAT REFRESHES Was that Chronicle Art Director Taylor Holland wearing a jolly white beard and cavorting with The Wampus and Oso Serious at Austin's first ever Santacon? The Con, which has been going on in bigger burgs for years now (www.santarchy.com), is a clandestine club crawl that chauffeurs a busload of Santa-suited sots around town to get their drink (among other things) on. Our local lushy Clauses were spied last Saturday at the Poodle Dog Lounge and the Carousel, among other poles of pleasure.