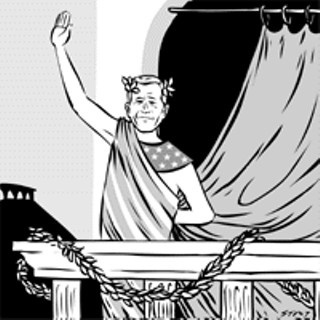 In a national crisis you and I don't meet as writer and reader but as citizen and citizen, with equal responsibility for seeing to it that "the consent of the governed" remains the ruling principle of American society. I'm writing to say that, nearly three months after the September 11 attack, we meet in an America at risk at least as much from our own White House as from alien terrorists.

First give the devil his due:

On the scale of international, intercultural history, Bush the leader has outgrown Bush the politician. Where he'd believed in unilateral American action, he now forges alliances in the most volatile climate imaginable -- a major achievement. Where he had contempt for "nation-building," now he has moved toward the position that only a United Nations-sanctioned restructuring of Afghanistan, and even of the Middle East, is viable. He's even gone multicultural: For the first time in its history, our government is having to consider Islam on its own terms -- Ramadan feasts in the White House! It was the undeniable will of the people that America respond to September 11 militarily, and Bush has exercised that will with intelligence, restraint, and effectiveness. We must not take for granted the disaster that could have been: a military overreaction that would have plunged the world into chaos. No one of intelligence can help but be grateful that Bush ignored the most rabid voices in his own party and saved us (so far) from the irretrievably chaotic.

But, from the first, Bush also pursued a sinister agenda that is finally becoming undeniable.

Weeks ago it was possible to write the following paragraph, and I did:

"The administration's attempt to control information must be watched and resisted. But even this requires a little perspective: Woodrow Wilson encouraged an utterly senseless pogrom against American socialists and pacifists during the First World War, Franklin Roosevelt signed on to incarcerating Japanese-Americans in the Second World War, and Lincoln suspended habeas corpus when it suited him in the Civil War. No Bush proposal has been anywhere near as extreme."

This is no longer true.

We'll start with Homeland Security and proceed to presidential decree and military tribunals.

As the dust of the World Trade Center literally hung in the air, an Office of Homeland Security seemed reasonable. Its announced function was to coordinate governmental agencies in their task of guarding America from terrorist infiltration and attack. So far so good. Many in Congress (on both sides of the aisle) wanted an entity as crucial as Homeland Security to be a new, even cabinet-level, government agency -- which would mean a budget open to review and approval, and accountability before (closed) committees of the House and Senate, as is the case with the CIA, the FBI, and the Pentagon. The White House said no; Congress bowed and stepped back. The Office of Homeland Security is answerable only to the president. No checks and balances. No records accessible even to Congressional intelligence committees. No way for us to know anything about Homeland Security except what the White House wants us to know.

The shape of that abuse has become evident already. On November 14 the White House announced that terrorists would be judged by military tribunal -- secret trials, with flimsy rules of evidence; the tribunals would be answerable only to the president. On the same day the Justice Department announced that it would continue to refuse to disclose the identities of the 1,000 immigrants now being held in America, and the charges against them; it further announced that it would no longer release even the number of people being held. Attorney General John Ashcroft claims that "the arrests may have thwarted other terrorist plots." The precedent is being set: You can be arrested, held indefinitely and without specific charges, for something the government imagines you may do in the future; and you can be tried for these imagined charges by a military tribunal that answers only to the president. All the president has to do, under this decree, is claim "a reason to believe" that so-and-so is a terrorist. Today it's aliens; tomorrow it could be you -- for the key word isn't "alien" but "terrorist," and the president is reserving the right to define that word.

This is worrying conservatives as well as progressives. Let no less a right-winger than William Safire make the argument, as he wrote in November 15's New York Times:

"Misadvised by a frustrated and panic-stricken attorney general, a president of the United States has just assumed what amounts to dictatorial power to jail or execute aliens. Intimidated by terrorists and inflamed by a passion for rough justice, we are letting George W. Bush get away with the replacement of the American rule of law with military kangaroo courts. In his infamous emergency order, Bush admits to dismissing 'the principles of law and the rules of evidence' that undergrid America's system of justice. He seizes the power to circumvent the courts and set up his own drumhead tribunals ... His kangaroo court can conceal evidence by citing national security, find a defendant guilty even if a third of the officers disagree, and execute the alien with no review by any civilian court. No longer does the judicial branch and an independent jury stand between the government and the accused. In lieu of those checks and balances central to our legal system, non-citizens face an executive that is now investigator, prosecutor, judge, jury, and jailer or executioner. In an Orwellian twist, Bush's order calls this Soviet-style abomination 'a full and fair trial.' On what legal meat does this our Caesar feed?"

Congressional leaders are baffled and alarmed. Sen. Patrick Leahy, D-Va., chairman of the Judiciary Committee: "I don't know when in the last 20 years I've heard so many members of both parties come up and say, what the heck is going on?" He further commented: "I don't know anybody on the Hill who feels that some of these things have done anything that has increased our security. ... We're really not being consulted at all, and it's hard to understand why. [The White House is sending] a message to the world that it is acceptable to hold secret trials and summary executions without the possibility of judicial review."

Representative Bob Barr, R-Ga., a rabid conservative if ever there was one, and a member of the House committee on the judiciary: "I'm not aware that they're consulting at all." He also said, chillingly: "These changes are so vast and fundamental ... [they] will likely set precedents that will come back to haunt us terribly."

I am writing to say that it is the duty of every American citizen to contact every single one of your elected representatives -- your City Council member and mayor, your state representative and governor, your Congressional representatives and the president -- to protest this abrogation of law and usurpation of liberty. Demonstrate -- peacefully. Use your Constitutional guarantees of protest. For all the talking heads in the world can't stop Bush now. Only a groundswell of citizen protest on every level of our republic will stop him. A coup-by-decree against the Constitution is occurring at this moment. If you -- yes, you -- do nothing, it will be on your head. Your silence, your complacency, will be taken correctly as consent-by-default. Which is why now you must not leave the speaking to the likes of me. You must speak. Make yourself heard. It's time to stand up and risk. To fight for your country.