Thanksgiving? What with the day-after mall mania and less-than-stellar eating experience we had on Turkey Day proper, at least we can be thankful for Austin's cool fashion shows and celebrity sightings. 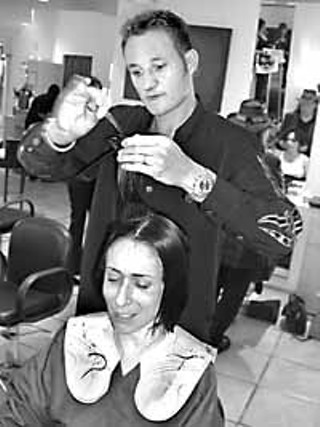 Gowns and corsets by Judy Masliyah, hair and make-up by Avant, and models by Acclaim (Photo By Bob Sherman)

CATWALKING Sunday, Nov. 18, brought us Seamless from the Designers' Guild of Austin, and it was great to watch the show as a spectator, rather than a producer. As Austin's only fashion show dedicated to original design, it offered some amazing clothes from a well-rounded assortment of designers. Highlights included Judy Masliyah, who dazzled the crowd as usual; Brooke Carter's reconstructivist fashion; Meredith Moseley's very fun and sexy pieces for both men and women; Cindy Crowe's fabulous painted coats and jackets; Kari Perkins' nomad-chic; Laura Maclay's beautiful handbags; and the runway debut of Gail Chovan's Baby Blackmail collection. The production itself was an improvement over past shows in almost every way. Continuing to raise the bar for fashion presentations, it is one of the must-see style events in Austin.

STAR TREK Spies at the Continental Club report that John Corbett, formerly of Northern Exposure (as the hunky philosophical deejay, Chris) and currently starring in Sex and the City (as Carrie's even hunkier squeeze), is here in town for a few days. After seeing (right here in the Chronicle, thank you) that his old friend Dale Watson was playing at the Continental, he dropped in and turned more than a few heads with his good looks. This was not John's first visit to Austin; he also comes to visit his old friend Earl Poole Ball.

DECK THE HALLS Seen the Christmas decorations downtown lately? Tack-eeeee. From a long way away, they look alright, but upon closer inspection, you can practically hear the words "Attention, Blue Light Special!!!" emanating from them. The cheesy tinsel garland looks like it's seen better days, and rather than creating a reflective glow across the strings of lights, it simply blocks them, making it appear that the city cannot afford to replace a lot of burned out bulbs. But the worst part is the horrid decorations on the sides: little drums and harps and other things that might be charming in your Aunt Velma's front yard ... but to adorn the grand avenue leading up to the Capitol building of the greatest state in the union? Just say no to ugly decorations. I'll even volunteer to help take them down ... with a chainsaw.

THE DISH My sister and I decided to have Thanksgiving dinner at a legendary Austin institution noted for its atmosphere, Southern cuisine, and good service. Mon Dieu, what a mistake. It's been well documented that the quality of the food at this establishment has declined considerably over the years, but I was ill prepared for the institutional taste apparently designed to appeal to the lowest common denominator. It wasn't horrible food; it was just as unremarkable and bland as it could be. The gravy was clearly formulated for heart patients, and the kitchen evidently ran out of every form of seasoning. But good service can often overcome unappetizing food and at least manage to make the experience not entirely unpleasant. I'm sorry to say this was not the case here. From the poorly informed and less-than-gracious gaggle of teenaged hostesses who "greeted" us, to our teenaged waiter, whose stock started plunging as soon as he had trouble telling us his name, the service was negligent, at best. The iced tea took forever to arrive -- and silly me for actually drinking it and not portioning it out over the course of the meal, because getting a refill was out of the question. As for the free second helpings of vegetables? You're better off ordering any extras at the beginning, because once that food and drink is on the table, wave goodbye to your waiter: He's history. OK, granted, it was Thanksgiving. The entire kitchen and waitstaff may have been tired (or perhaps the more stellar staff was given the holiday off?), but you'd think after being so busy, certain things would just become automatic ... things like asking a patron, "How is your meal?" and "Would you like a refill on your beverage?" or even "Is there anything else I can get for you?" Eventually, we were able to flag the young lad down and ask for a to-go box. When he returned with it, he says, "Here you go," leaving the check on the table and disappearing. Hmmm. Guess dessert was out of the question, too. Absolutely deplorable all the way around. If I could tell you the name of the place without inciting a riot, I'd tell you not to go. But I can't, so I won't.

LUCKY THEM Local retailer Vylette, at the swank Davenport Village, has a great write-up in the December issue of Lucky magazine. Owners Amy Weaver, Leigh Royce, and Christina Klisanin have been besieged with customers hot for, among other things, Vylette's handmade cowboy boots from Stallion Boot & Belt Co. in El Paso. BTW, Stallion is also making the boots for the new Dolce & Gabbana collections.

THE CONSPIRACY Exactly how did the American public get bamboozled into believing that they had to get up at the crack of dawn the day after Thanksgiving and attack the malls like crazed zombies? With reports of overly avid shoppers actually camping in the parking lots, to lines several blocks long for a store that opens at 7am, it is utter madness. The walkways of the malls more closely resembled Roller Derby rather than Rodeo Drive, as places like Dillard's and Foley's shamelessly lured in customers by practically giving away the merchandise. On the strip-mall circuit, at one outlet of a large electronics retailer who offered deals "too good to pass up," the checkout line became a three-hour ordeal. Stores like Ulta, Ross, and Pier 1 were somewhat better, but certainly not without their own frenzies. The complete mystery is the idea that if you get up early, you'll beat the crowds. Nonsense! Everyone else has the same idea. A better plan is to spend the morning lounging around with your holiday guests and go to the mall in the afternoon after the riot has subsided ... and just take rain checks for any sold-out merchandise.

TONIGHT Thursday, Nov. 29, the semi-annual Style Within a Mile walk, produced by the Central Design District, is from 6-9pm. Free. Call 478-9965 x201, for info ... Tonight is also the First Annual Hairdressers Ball at the Continental Club, 9pm.