ON THE PROWL Last week's party circuit took us to a swank and intimate party off Enfield Road. The hosts, a local power couple who have a to-die-for home and would probably prefer that I not mention their names (and we'll respect that, since we hope to be invited to more of their swank and intimate parties), were honoring accomplished filmmaker Sandy McLeod and her husband, Sam Dryden, a venture capitalist. McLeod starred in Bette Gordon's Variety, and was charming and forthcoming with gossip and anecdotes about her film connections, including a wicked story about how obnoxious director Paul Schrader (Cat People and Patty Hearst) was to her during the filming of Light Sleeper. McLeod's credits also include John Sayles' Limbo and City of Hope, as well as Something Wild, Stop Making Sense, and Times Square. Among the guests present were Texas Monthly Editor Evan Smith and his lovely and delightful wife Julia (she really knows how to rack up points with this columnist -- big kisses, Julia, and let's dish more very soon), Austin Chronicle Editor Louis Black and his lovely and delightful wife, Anne Lewis, Chronicle Politics Editor Michael King and his lovely and delightful wife Mimi, my illustrious sister Margaret Moser, and a small but brilliant assortment of other media types.

CATWALKING As usual, when it comes to club fashion shows, Club DeVille rules the roost. The twice-a-year Fashion Extravaganzas are sellouts every time. And as we've come to expect, the service was great. An unprecedented nine stores showed a wide range of presentations, offering dozens of different approaches to fashion, while emcees Emily Fawcett and Joel Mozersky kept the ball rolling. New Bohemia showed some great vintage and marvelous accessories in a variety of looks, including a fabulous Victorian cape. Shiki always does a great presentation -- always beautiful, always modern clothes for modern girls -- and lovely make-up, too. With great panache, Under the Sun showed gorgeous vintage cocktail wear for men and women. Chimera, with a set of lovely twin models, gave a dose of cheap-and-chic contemporary freshness. By George brought welcome relief with stylish and forward pieces for men and women: The women's wear was cool -- the menswear was great, especially the leather jackets. Therapy showed smart and snappy dresses and sportswear. Legs Diamond took a clever approach to showing off their fabulous shoes -- a plethora of vinyl-jump-suited models carrying them on trays. Flipnotics showed some of the best vintage of the evening, wonderfully styled and never slipping into funkiness -- notably, a pink crystal-pleated chiffon baby-doll ensemble that was as sexy as it was demure. Blackmail showed magnificent vintage couture (all black, of course), and in a stunning finale more akin to a funeral procession, sent the models down the runway with their faces obscured, obliquely, yet movingly, referring to current world events. Altogether, it was one of Club DeVille's biggest and best productions, showcasing some of Austin's most interesting retailers. A special prize will be awarded to the first reader who can correctly identify the retailer who had the drunkest models staggering down the runway. 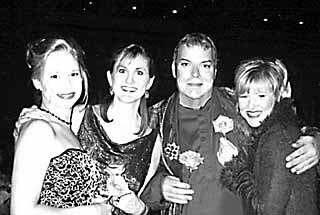 "Beauty Without Irony" from Blackmail (Photo By Bob Sherman)

HOMEGROWN The hard-working folks at Austin's own Naqura Clothing Co. have a great little Web site up (see it at www.naquara.com). Naqura president Chris Porter tells us that its Fall 2001 collection, Functional Denim, is their best yet. "The conception reflects today's young-tech-savvy men looking for a place to put all of their new toys." Stylish and creative, it offers a new twist on an old favorite. Contact Naqura directly at 929-9605.

TRASH-TALKING My stable of young spy girls say they swear by Lipfinity lip color by Max Factor. They report that it definitely has staying power, even in the most intimate moments, and that you can wrap your lips around anything and it won't come off: not on you, and certainly not on him. Run to your local drug store, girls.

1) Jeans go with everything.

Negative. The jeans-with-everything approach is for those whose idea of personal style stops below the waist.2) Dark, solid colors make you look slimmer. It's a lie. If you're fat, you'll look fat whether you're in a little black dress or a big floral muu-muu; wear what you'd like.3) One size fits all. Baloney. One size fits small.

4) People want to see your underwear. Wrong. They do not. Wear a belt, and don't leave the house wearing anything that could be described as a bra-top.