Stephen gets a new hairdo! 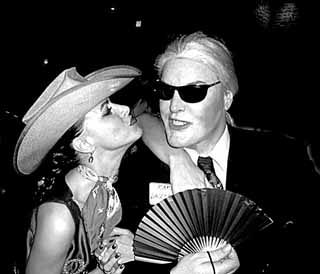 We waited forever, it seems like, to get an appointment at Avant with just the right colorist and cutter. Of course, when your hair's too long and your grow-out is longer than the color on the ends, weeks can seem like months. But, we did wait -- and, thank heavens we did. Never, in our personal history of haircare, have we been so pleased with the results. We went to the location at Fourth & Colorado, where we met the highly recommended team of colorist Stuart Meche, and cutter Jon D. The salon itself is gorgeous: beautiful custom designed cabinets, shelves, and work stations, infused with an ambiance of serenity and high style. As an Aveda Lifestyle salon, the award-winning Avant is schooled in all the latest techniques and products. Turning them loose to do whatever they felt was best, Stuart and Jon consulted and came up with a plan that suited our few requirements, yet offered serious creative leeway for themselves. Of course, the color went on first, and we chattered away with Stuart while it happened. He's from Lafayette, La., and has enormous charm and sensitivity; for someone so young, he has already earned his stripes in the beauty biz. We asked him what it was about Lafayette, also the hometown of his friend Kevin Aucoin, that fostered such creativity. "Probably the need to escape," he said. Lafayette's loss is Austin's gain. Brought to Austin by Avant, he has made a fabulous reputation for himself in two short years, and it's easy to see why. We talked about his choice of color for us and why he chose it, and his logic was unassailable. What he produced was exquisite work: a lusciously rich brown base, with well-defined highlights of copper and blond at the front. Lovely, but the end result was still up-in-the-air ... it hadn't been cut yet. While the color developed, we received a luxurious hand massage from the lovely Sam, whose lavender-tinted undergrowth made her eyes sparkle as much as her personality did. We had met Jon D at the By George grand-opening party. He was unquestionably the most stylishly dressed man present, so we accosted him, inquiring about where he shopped. "Dallas," was his simple reply, rendering my question ridiculous. When he told us he cut hair at Avant, we bemoaned how remiss we were in visiting the salon (owner Roy Fredericks' venerable establishment) and promised to be in soon. That had been so long ago, we were embarrassed when we finally made the appointment a couple months later. But moving from Stuart's chair to Jon's was definitely shifting gears. Jon is his own walking advertisement. When he originally asked us what we had in mind for a cut, we pointed to his own and said, "How about something like that?" Altering the basic style to suit the characteristics of my hair and personality, he slid open a drawer with a spread of tools that resembled a surgeon's. As he snipped with scissors and shaped with a razor, we began to see his idea become reality and were dazzled by the results. In the end, we had a stunning combination of cut and color that not only looked youthful without trying too hard, but also made us want to walk straighter and taller with renewed confidence that only fabulous hair can give you. We have to give Stuart and Jon (and the whole staff) an A-1 rating in every area possible. Incredible creativity and professionalism, dolled up in a swank package is a winning combination, and Avant's exquisite reputation is well-earned. Days later, we're still in awe of the work. Could there be a better recommendation?
More After a Fashion columns