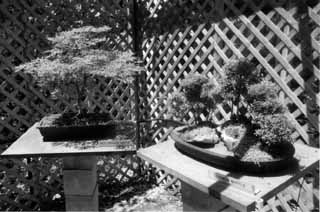 Jade Gardens outside of Wimberley combines the ancient Oriental art of sculpting living trees with native Texas plants. The results are container-grown plants that are familiar, yet beautifully unique.

The adjoining Central Texas Bonsai Exhibit is an outdoor art gallery of sculpted trees. The personal collection of Chuck and Pat Ware, the 125 colorful and twisted bonsai trees make up one of only 16 or 17 public exhibits in the U.S. As beautiful as works of fine art, some of the plants are more than 100 years old, but still stand about 4 feet tall.

"Bonsai literally means 'a tree in a tray,'" says Pat Ware. The 160 species of trees at the nursery range from the traditional to the eclectic, with a focus on native species. The Texas ebony tree from the Rio Grande Valley makes a beautiful arrangement with its small leaves. Other native plants in the exhibit are the mustang grape, Kingsville boxwood, and big-tooth maple tree. The exhibit also includes a bald cypress tree that is at least 100 years old and a bougainvillea from Florida that is more than 80 years old, yet neither is no more than 4 feet tall. Each is a masterpiece in its own right.

The Wares have finally found a use for the ash juniper, commonly called a cedar, that produces fever-like symptoms throughout the populace during pollinating season. By controlling the roots and training the branches they actually turn the plant into a work of art.

A favorite of the Wares are the elm and oak trees of South and Central Texas. "We do a lot with native Texas trees." Pat says, "My husband really likes things that don't conform to tradition."

The art of sculpting the tiny plants originated with the monks in China and was adopted by the Japanese. The Japanese style of bonsai is very structured, Pat says, while the Chinese love the curves and more gnarly look of natural growth. "We tend to lean more to that style," she says with a laugh.

"The object of all bonsai is to look as close to nature as possible," Pat says. Like any art form though, beauty is in the eye of the beholder. Two people will look at a tree, and one will love it, and the other might hate it. "If you like it, then it's good," she says.

Although bonsai trees can range from 6 inches to "four-man bonsai" trees that take four men to move, they are actually very hardy and can survive inside or outside (but must be protected from freezing). Pat says the most common ways to kill a bonsai are to put it under an air conditioning duct or letting it dry out. The trees do require some annual maintenance, but that is part of the fun of owning a plant that is a living art piece.

"When you buy a small bonsai it will get fuller and have better branches, but it will basically look the same in 20 years," Pat says. The idea is not to grow a bigger tree, but rather to shape it. In nature the big roots are to support the large canopy of branches and leaves. In a bonsai pot you want to encourage the growth of smaller feeder roots.

Think of the pot as a picture frame, Pat says. It should be proportional to the size and shape of the plant. If the pot matches the plant and the tree is adequately watered, fertilized, and cared for, it can happily survive for many years.

"Bonsai is a slow art," Pat says, "it is not something that happens overnight." For instance a 6-year-old black olive tree is only about 6 inches tall with a trunk as big a pencil. "You're not going to get a trunk with that tree," she says, but that's not what you want. The pleasure is working with the leaves and branches.

The Wares discovered Texas after Chuck returned from Vietnam and was stationed at the Corpus Christi Air Station as a training instructor. Pat is originally from Ohio, and Chuck was from Brooklyn. "I wanted some place with trees away from the snow, and he wanted some place close to the ocean," Pat says. They settled on Wimberley where Chuck spent a second career teaching fourth through seventh grades.

One of the lessons Chuck used was to take the students out to nearby ranches and dig up ash juniper to teach horticulture and botany, Pat says. When the couple saw a television show on bonsai, Chuck decided he knew how to do the hard part, all he need was to learn the art form. "He always has had a good artistic eye," she says.

After retiring from teaching, Chuck and Pat embarked on a third career. "He had to have something to keep him busy," she said. "All teachers are workaholics, I think. He couldn't stand to sit around and watch TV all day."

The nursery, hidden from the highway behind a stand of live oak, is a full-time job for both of the Wares. Besides the exhibit and the plants, they also sell Oriental gifts, tools, books on bonsai, pottery, and water gardens.

The nursery and exhibit are open 10am-6pm almost every day. Although either she or Chuck are there most of the time, Pat recommends that visitors coming from a long distance call first, "just to be sure there is someone here who knows about bonsai." For information, call 512/847-2514 or go to www.wimberley-tx.com/~bonsai.