"After a Fashion" tosses a few words around about local designer Brian Frisbie, and guess what this Thursday is? 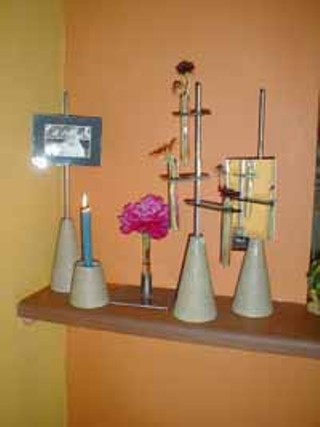 MODERN ALCHEMY "I see you everywhere, at every fashionable event, every art opening, every stylish restaurant," I said to him, "so what exactly is it that you do?" "I am a designer and fabricator," he said. But every time I saw him, Brian Frisbie was doing something different; from making people fly in a fashion show to strikingly original interactive sculpture, he personifies the independent artist spirit that defines the Austin scene. As a designer and fabricator, he has supplied furnishings and architectural detailing for Jackson-Ruiz (including a large shoji screen and cabinets), Circle C Golf Clubhouse (railings and foot rails sculpted to resemble braided steel, and signage), and the now-defunct N8, for whom he produced the display pieces and furnishings (including massive fixtures whose sense of lightness belied their size). He has also worked with Studio of 2 on 6 (now Studio H + L) on the AIA Homes Tour, and assisted signmaker Evan Voyles on numerous projects, including the new Alamo Drafthouse North. He worked with Buzz Design on the club Twist, and was also with Buzz working on the restaurant Soma when he met the woman who would become his wife, Barbara, who was helping to open the establishment. Barbara, who also assisted in opening the fabulous Big Red Sun, has vast background in hospitality and business management, and is the motivating force behind the creation of Frisbie Design Concern. "I've always wanted to create a family business," she says, and their first product was Max, the Wonder Baby -- their 1-year-old son. Says Brian the artist, "I never thought I'd have a corporate identity," but Barbara, the marketing and business manager, has the vision that helps balance the artistic dream. They are booked at most of the upcoming major gift shows, debuting their collection of decorative accessories. Called the Alchemist Line, the Frisbies produce organically modern forms in steel, glass, and concrete, featuring sconces, photo stands, candleholders, stand mirrors, and vases with a chem lab feel. Utilizing test tubes mounted on steel poles and plates, the stark clinical look of some of the pieces is wonderfully contrasted by the substantial feel of the cut steel and rough concrete. The 22-inch bud vase consists of three adjustable and removable test tubes that can be set in any configuration you desire. Parts of one piece can even be assimilated into another, creating a work that can display flowers, photos, mirrors, and/or candles. Another example is a vase and matching sconce whose simplicity makes a bold statement. It is the beginning of what promises to be an extensive collection of items that are "aesthetically compelling and that are perpetually improving our surroundings." The goal is smart design through which they'd like to attain the respectability of, say, Philippe Starck; as resourceful as the Frisbies are, it's a distinct possibility.

Okay, now we have to talk about the Half Shark Alligator Half Acre Show (through July 31 at Cafe Azul on the Eastside) in which Frisbie has a piece on display. Combining works from many artists, the show features Frisbie's charming steel and Lucite sculpture Cunningham's Ride Home, a spaceship mounted atop a tall pole that spins in its orbit, controlled by a crank, which sold for a cool $1,100. Frisbie's entry was only one of several outstanding pieces, including works from Blue Genie, Bill Twitchel, Joel Mozersky, Sue Blevins, and Evan Voyles. Everything is shown in an open outdoor space behind the cafe, allowing for such works as the fabulous Our Pond by Gian Calaci, and Linda Lou's wonderful Thown Lamp, and many more. It's a very fun show that deserves a close look.

SECOND FIRST THURSDAY Tonight, July 5! The merchants along the chic SoCo Strip will stay open until 10pm (as they will on the First Thursday of every month), hosting an array of events including music, art openings/displays, trunk shows, sidewalk sales, and lots, lots more. Of special interest will be Pink Salon's Focus on Fashion, which displays the works of many of Austin's creative clothing designers.