North Texas' Lake Texoma is about more than just fishing for stripers. 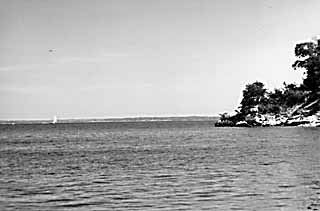 A lake for all sports (Photo By Gerald E. McLeod)

Lake Texoma, on the Texas-Oklahoma border about two hours north of Dallas/Fort Worth, is a world-class playground that attracts visitors to the cool waters and green shores. More than 80 resorts, campgrounds, and parks around the lake cater to millions of visitors every year.

Although it is only the 12th-largest Corps of Engineers' lake, it is the most popular. Chalk up the lake's popularity to its accessibility from several states and the ideal fish habitat created by an old river channel. Dubbed the "Striper Capital of the World," Lake Texoma is one of few reservoirs in the nation where the striped bass reproduce naturally.

Originally a saltwater fish that migrated into fresh water to spawn, striped bass were first landlocked behind the dam at Santee Cooper Lake in South Carolina. Not only did the fish survive, but they thrived in lakes with just enough salinity and current to keep the eggs from sinking to the bottom. Now they're stocked in nearly every major lake in the South.

While saltwater stripers can weigh as much as 70 pounds and are harvested commercially, sport fishermen enjoy landing the spirited freshwater fighters that can reach 40 pounds and make a tasty meal. The record striper for Lake Texoma is 35.12 pounds. The lake holds the national record for the largest blue catfish, which weighed in at 118.5 pounds. Texoma is also known for producing good quantities of other species of fish. Fishing on the lake requires a special license that sells for $7.50.

With the Red and Washita rivers feeding the lake as well as several smaller tributaries, Lake Texoma covers 89,000 acres and has 580 miles of shoreline. Driving north of Denison on U.S. 75 across the dam gives a sense of the enormity of the water control project. Completed in February 1944, the 15,200-foot-long structure is 165 feet tall. The reservoir was built for flood control, water supply, hydroelectric generation, and of course, recreation.

Not all of the recreation on the lake centers on fishing. Hagerman National Wildlife Refuge offers 11,320 acres of vital wildlife habitat. Some 300 bird species have been recorded in the refuge, including bald eagles. Established in 1946, the wilderness area includes 3,000 acres of marsh and wetland along the lakeshore and 8,000 acres of upland and farmland. Throughout the year fields are planted with grains to supply food to wintering fowl.

A four-mile driving tour off of FM 1417 goes past a visitor center and through the main area of the refuge. The Crow Hill Trail offers a close look at the native prairie landscape. When Lake Texoma was built, the town of Hagerman was removed and a historic exhibit of the settlement was added to the park. Dotting the landscape are 200 oil wells that have coexisted with the wildlife since 1951.

For information on Hagerman NWR, call 903/786-2826 or go to southwest.fws.gov/refuges/texas/hagermn.html.

Eisenhower State Park is one of 17 campgrounds on the Texas side of the lake. The 457-acre park covers a small peninsula near the dam. Smallmouth bass favor the rocky ledges under the limestone bluffs along the shoreline while swimmers enjoy the park's protected coves.

This is one of the few state parks that offers all-terrain vehicles 10 acres of rough playground area. There are four miles of mountain-bike trails that range from easy to challenging. The park also has screened shelters, as well as campsites and RV sites, a boat dock, and a lighted fishing pier.

Located within the park is the Eisenhower Yacht Club. Privately operated, the marina has a store with basic supplies. For information on the park, call 903/465-1956 or visit www.tpwd.state.tx.us.

For hikers, the Cross Timbers Hiking Trail is one of the most popular trails in North Texas. Winding 14 miles along rocky ledges and through blackjack woodland, the path passes through Juniper Point, Cedar Bayou, Paw Paw Creek, and Rock Creek parks. There also are more than 40 miles of equestrian trails around the lake. For more information, call the Corps of Engineers at 903/465-4990 or the Lake Texoma Association at 580/564-2334 or www.laketexomaonline.com.

A 15-mile drive from the water's edge, the city of Denison is the gateway to Lake Texoma, but it has its own attractions. The town is probably best known as the birthplace of Dwight D. Eisenhower. The home where the 34th president was born in 1890 is a state historical park.

The quaint two-story house was owned by the Eisenhowers while Ike's father worked for the Missouri, Kansas, and Texas Railroad. The day-use park includes a short hiking trail as well as a small visitors center. The museum in the center has an excellent display of Eisenhower's long career.

Denison was established as a railhead and for many years the tracks were the lifeline for the local economy. The stately 1909 Katy depot on Main Street has been turned into a railroad museum and shopping mall. The historic business district still attracts a healthy stream of shoppers. At Loy Park the city has preserved 17 rustic buildings in a Frontier Village.

At Grayson County College on the south side of town, the Munson Viticulture Center honors the man who saved the French wine industry. Local professor T.V. Munson developed hybrid grape varieties that were disease resistant. Open weekdays, the center includes gardens, a museum, and greenhouses.

On the Texas side of the lake, Bonham, Sherman, and Gainesville offer additional ground to explore while you're in the area. The Oklahoma side of the lake is another world of attractions and sights. It can be a tug of war trying to see it all in the Lake Texoma region.

Icehouse Art & Music Festival sponsored by Luling Icehouse Pottery celebrates the pottery's first anniversary while exhibiting the works of area artisans and the music of Shake Russell and Dana Cooper, Bill McNeal, and others, June 23, 10am-6pm. 830/875-6282.

Watermelon Thump will be happening at the other end of Davis Street in Luling on June 23. Don't miss the fun and excitement of seed-spitting contests, barbecue, and of course, watermelon. 830/875-3214.