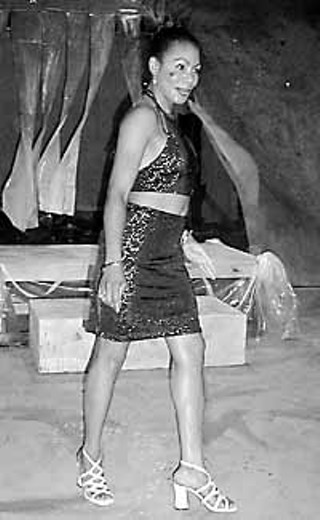 WANNA MAKE US SWEAT? Saturday, June 2, offered us the first annual Summer Sweat & Schmoozarama presented by Meredith Moseley, Marcia Evers, Kari Perkins, and Natalie Flores of the newly formed Star Costumes & Clothiers. And sweat we did -- but the show's producers evidently knew that would happen, hence the name. Taking place in an old Eastside bread factory, it looked like the kind of show that the participants had a great time putting it on -- and like most shows that look like they were fun for the participants, the show suffered from some problems. It's easy to imagine the difficulty of four designers reaching consensus regarding how to present the show. One of the major problems seemed to be in combining clothing, costumes, swimwear, and vintage on the same runway. All of it would have been a lot easier to digest if the segments had been more defined; the messy presentation distracted from some very fine design work. Some of the swimwear and costuming was dazzling, but the impact was lost in the avalanche of models and amateurish choreography. Many of the models did not make their changes in time, and clothes appeared in the final bow that never even appeared in the show. "Model" is a very relative term: Some of the male models were jaw-droppingly handsome, and a couple of the women were beauties, but the rest seemed to be culled from friends and family. Of course, design must be for real people, but that's not the purpose of the runway. The idea is to create an image so desirable that the viewer thinks, "That's what I'd like to look like," instead of, "I'd never wear that if I were her (or him)." That said, when the remarkably attractive swimwear was shown properly, it was easy to imagine it on the pages of the glossiest magazines. Especially the men's swimwear, which should be aggressively marketed toward Austin's affluent gay sector (hint: Go after the International Male catalogue crowd). But as far as the presentation itself, I would have almost preferred a no-nonsense swimwear show, say, at Barton Springs for instance, that played up function as well as form. The whole setting at this show was more like a rave than a fashion show -- the cavernous industrial setting, cool DJ, colored lights, spray painted backdrops, and fog. And while that's a very hip approach, it makes it impossible to really see the clothes (the prime purpose of a fashion show). And the emcee, with his mysterious tail, was a problem too, drawing far too much attention to himself, as well as to the blunders in the show. The music playing behind him was wonderful and would have been perfect by itself with no narration. There was already so much happening, and the outfits were whizzing by so fast, it became a distraction: like when the clothes he was describing were not the clothes we were seeing. But the clothes did fly. From maternity swimwear, to Moulin Rouge-like costumes, to very interesting fetishwear, to tie-dye by Angela James for Colorwheels, with hair and makeup by Cristoph & Leigh of Bella, it was an amazing conglomeration of design work. The show, a benefit for the very worthy SafePlace, was obviously more popular than Star thought it would be; they could have used three times as many chairs (and programs, please, to see who's who, and what's what, and to fan ourselves!). Post-show entertainment was provided by Rustle. After the show, we got a tour of Star's workspace, an impressive spread that will suit their needs well as they branch out into custom design. There is a need in Austin for custom clothing designers, and Star seems to have everything it will take to make a go of it. With a lot of courage, and some serious advertising to the right customer, as well as pursuing the wholesale market, Star can become an Austin force to be reckoned with.