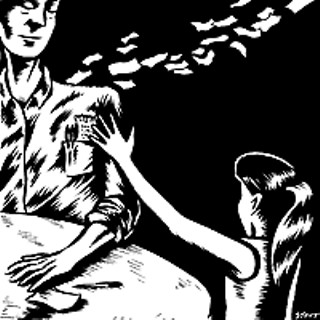 This dream, 20 or so years ago: As though I'm a brick in the wall (my consciousness is present but I am not), I see a torchlit passageway in Arthur's castle ... Merlin and Guinevere are meeting secretly so that he may give her a scroll ... it is a long poem titled Thirteen Cantos From Hell. I remember the textures of their robes, the tentativeness of their gestures, and how they seemed to say so much though they did not speak. Waking, I thought of the old tales. What Merlin told Arthur at the convening of the Round Table: "Do not dishonor your feast by rejecting what comes to it." What Sir Gawain told his friend as he rode to the castle of the Green Knight: "What else can befall a man except that he should go to meet his destiny?" As I recorded the dream that morning I knew that one day I must write those Cantos From Hell, but I also knew that it will be ages before I was ready, and very possibly I wouldn't live long enough. And this dream, almost 10 years ago: walking on a beach with Marilyn Monroe ... she's barefoot and wearing a marvelous glittery gown, like the gown she wore singing "Happy Birthday" to President Kennedy ... she's happy, giddy, maybe a little drunk ... I see that her gown is made of many tiny mirrors ... no, they are not mirrors but screens, screens tiny as sequins ... when I look closely, I see that the entire history of the world is playing in fragments on each sequin-screen.

Before the more elaborate dream I am about to relate, I'd been wondering why I don't write more about jazz, what with how closely jazz and writing are linked in my psyche, in my history. I began seriously to write at age 14, during the same period that I became obsessed with jazz. Louis Armstrong opened the gates for me. It was as though he was playing sounds I had longed to hear but had not believed could exist. That they in fact did exist, and that this human being could embody them and make them exist ... there was something more expansive and inviting in these sounds than anything I'd ever heard. Innocent of genres, I saw little essential difference between styles -- at 15, 16, 17, I was too hungry for what jazz offered to be a critic, and listened to Armstrong Plays W.C. Handy and Miles Davis' Kind of Blue in succession for weeks on end. On the Davis record John Coltrane seemed to be playing a chart of my central nervous system. And wasn't Charles Mingus always praying in his music, isn't that what prayer should be, a staking of everything in this never-to-be-again moment? And I began to read all the books I could find about jazz, and still do. Charlie "Bird" Parker saying, "It's just music. It's playing clean and trying to find the pretty notes." Dizzy Gillespie saying, "All the music is out there in the first place, all of it. From the beginning of time, the music was there. All you have to do is try to get a little piece of it. I don't care how great you are, you only get a little piece of it." Years later I was befriended by Joe Albany, a pianist who played with Lester Young and with Parker, and Joe told me when I interviewed him: "I feel when somebody's in prayer, don't look at them, respect it. But Bird and I are in the cab, and I'm magnetized. I look, I see Bird, and he's communicating with something. I don't know what. Up there. Like the world is going through his eyes. While here's somebody hitting somebody on the head over here, somebody robbing somebody over there, but I'm thinking, 'Jeez, he's trying to find the source.'"

I probably haven't written much about jazz because I never write without jazz, so jazz must be in the writing. I mean that there's always jazz playing when I work, and it's been this way from the start, always writing these columns to Bird, Trane, Mingus, Lee Konitz, Bud Powell, Coleman Hawkins, Ornette, Monk, Lester Young, Clifford Brown, and Ellington, Ellington, Ellington. I've a jazz library with every major recording from 1917-1973, and some of the best of what followed. In that context, then, this dream:

In the dream I suddenly awake, my present age (55), but in the year 1939. I have been transported back in time, and I don't know the reason. But I am aware of three strong directives or imperatives: I must not write, because my knowledge of what is to come could disturb Time; I must avoid, at all costs, seeing anyone in my family, even observing them from, say, across the street; I must not form any close attachments, because that too may disturb Time; and I will live out my life from this point -- meaning I can expect to die, say, circa 1960-1965 -- when the "me" of 1965 is 20 and still living his life. The question then is: Given these restrictions, what am I to do with my life, the 25-ish years I have left, beginning in 1939. My mother is 21, my father is 24, and it is terribly difficult to resist the temptation to see them, but I resist. I accept my fate -- "What else can befall a man except that he should go to meet his destiny?" -- but I'm vexed about what to do, what can my life be for, now that its central meaning, writing, has been excised?

I remember, in the dream, something that actually happened in my life, in 1988: Shortly after Joe Albany's death, at his memorial, I met a bass player who'd gigged with Joe -- an older, coffee-colored man who radiated a kind of energetic peace. I wish I remembered his name, but I was to give Joe's eulogy and I was nervous and didn't retain the name. The bass player told me of playing with Joe and others, in other times. I said, "I envy you." He smiled: "Don't envy me. Join me." He clearly meant: Join me in the music. Thinking of that in the dream, I realize I have one knowledge that seems useful: I know all the major venues where jazz will be played for the rest of my lifetime, and know sometimes the exact, sometimes the approximate, dates of many of the finest jazz performances. I can make jazz, the experience of jazz, the center and the motivation of my life. This seems to make all the sense in the world. For beauty does not exist on its own. Beauty cannot do its work unless we meet it and absorb it and carry it. When we perceive and value beauty we make beauty stronger, we become a node of the network through which art fulfills its function: the transmission of beauty that hallows and transmutes the catastrophe we call "history." Just by being there, just by digging it, I would be part of what makes the soul larger than history -- the defiant human conviction that people are more than merely what happens to them, a defiance art lives to feed.

So I would go to Minton's and Monroe's in Harlem in 1940, standing guard and witness as the young Charlie Christian, Monk, Diz, Bird, and Kenny Clarke reinvent music, playing chords no one had heard before. I would take my seat at Carnegie Hall in 1943 when Duke Ellington would premiere Black, Brown, and Beige -- my reverent attention, and my cheers, would stand against all the square critics' objections. I would go to Santa Monica in '46, to the Finale Club, where Joe would play with Bird and Miles. I would listen to Dexter Gordon and Wardell Gray on Central Avenue in L.A. I would be at Birdland and the Royal Roost in Manhattan when Bird and Fats Navarro and Bud Powell would venture so far beyond the timid illusions of security this culture hides behind. In L.A. again, at a little club on Wilshire Boulevard in January, '53, I would hear Lee Konitz's essay on the complexities of passion in "Lover Man," and my eyes would say, "It doesn't matter that there are only 30 people here, this moment will live for many years and grow stronger." I would be at the Five Spot in Manhattan in the summer of '57, when Trane and Monk would show everybody how fearsomely complex the psyche really is, and I would join them in their willingness to feel beauty in the face of that aggressive mystery. An old man now, I would walk across the Brooklyn Bridge when Sonny Rollins is woodshedding in the early Sixties, and listen from a discreet distance, and tip my hat to him. Perhaps I would endure into January 1964, and hear Johnny Hodges play that majestic "Passion Flower" solo with Ellington at Basin Street East. Giving these artists one more person to play to, one more person who lived for the same stakes they did, the quality of my attention would help give their conception somewhere to fly. In the dream, and now, writing of it, it seemed a worthy life. You don't have to sign your name to a life to make it count.

Not a dream anymore. In Sonora, California, a few weeks ago, as the snow fell in big wet flakes outside, at a joint called the Flying Pig: Four college kids who call themselves Perdition -- Jason "Bull" Lewis, sax; Dan Schultz, guitar; Greg Torrez, bass; Adam Fuderer, drums. They're playing "Bernie's Tune," Monk's "Epistrophy," Ellington, Bird, and Coltrane. They are still journeymen musicians, but they're so in love with the music, and playing with such immediacy, that people are dancing. Dancing to Monk. Dancing to Coltrane. Honky-tonk, nightlife dancing. A moment that leaves all the theories, all the critiques, all the documentaries, way far behind. Kids dancing to Monk and Trane. I'm a middle-aged man, maybe more than middle-aged, I haven't danced in a long time, but dig it, I'm dancing to Coltrane. History is compulsive and can't be helped; beauty makes its own rules and can't be stopped.