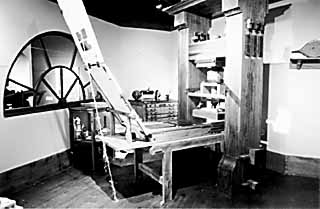 The Museum of Printing History in Houston tells the story of the invention that changed the world. This isn't your run-of-the-mill dusty depository of stagnant exhibits; this is a real workshop where visitors can smell the aroma of ink and see the miracle of an imagine transferred to paper.

Not only is this a museum dedicated to telling the story of the printed languages, but it is also a workshop for artists. Working presses in the museum are surrounded by walls covered with historical documents that illustrate man's fascination with the printed word. "We make the presses available to print artists wishing to use the traditional equipment," says Virginia Anderson, a staff assistant at the museum. The antique presses make unique impressions that enhance the artists' work, plus the ability to operate the machines is a dying art.

"For most artists it is hard to gain access to the traditional equipment," Anderson says. "Outside of a few universities and private presses the equipment just isn't available. It is even more unique that the artists get to operate the equipment themselves."

Visiting artists are assisted by resident artist Charlie Criner as they work on the antique presses, etch stone lithographs, make paper, or hand-bind books. The museum also hosts "Houston's Undiscovered Print Artists" exhibits to give the craftspeople a chance to show their work. For visitors, it is a unique opportunity to see the machinery in action and the results.

A walk through the maze of galleries is like traveling through a time capsule of communication methods. At the beginning, the visitor is introduced to examples of ancient writing and pre-Gutenberg rare handwritten books. The exhibit shows facsimiles of artifacts that are seldom seen outside of their home depositories around the world.

Although Johannes Gutenberg is credited with inventing the movable type and creating a revolution of literacy in Europe in 1450, the Chinese and Koreans had been using wooden blocks for printing since at least 1392. Only speculation explains why the Asian printing did not change the world like the European presses did.

In the Renaissance Gallery the museum has recreated Gutenberg's shop complete with a rare working replica of his printing press. Built in Germany to the same specifications as the original, the heavy wooden press is a marvel of man's ingenuity. It is an equally rare treat for visitors to find a museum that allows them to pull the handles and print their own copy of a page from a 15th-century Bible.

In the George and Barbara Bush Gallery stands a working replica of a 1796 lithography press of the type used to spread the word of momentous events at the turn of the century. Although the Bushes were honored with the naming of the gallery, they have only a passing involvement in the museum. The gallery that bears their name is a tribute to American history. There is a newspaper announcing the beginning of the Texas Revolution in 1836, a broadside for an appearance of Sam Houston, reports from battles of the Civil War, and the front-page news of President Lincoln's assassination.

The hallway containing the Hearst Newspaper Gallery features famous front pages and historic headlines. There is a 1675 copy of The London Gazette, the oldest newspaper still in existence. The first column of the June 10, 1845 National Intelligencer announces the beginning of the Mexican-American War while the third column features a story about the first telegraph lines between Washington and New York. Historic moments are preserved on the yellowing pages that also illustrate the evolution of newspaper design.

The Hearst Gallery includes some of the most historic publications ever produced, like Frank Leslie's Illustrated Newspaper of the 1860s, one of the first American newspapers to rely heavily on pictures. Harper's Weekly of the 1870s carried the illustrations of Thomas Nast, who first created the caricatures of Uncle Sam, the Republican Elephant, the Democratic Donkey, and Santa Claus. Before Charles Dickens published his stories in book form, most were serialized in his Household Words magazine; an 1850 copy resides in the museum.

Of all the historical artifacts in the museum, no exhibit attracts more recognition than the Gallery of Historical Office Machines. For anyone who has spent more than 10 years working in and around offices there are at least a couple of items in the gallery that will be familiar. It is amazing for those with short memories to see the size of the original copy machines. The younger generations will marvel inquisitively at the strange contraptions called manual typewriters.

Part history museum, part artists' workshop, the Museum of Printing History is also part art gallery. Throughout the year fine art exhibitions fill the walls. Feb. 8 through April 14, the gallery will present "The Prints of Dr. John Biggers and His Students." A widely acclaimed African-American artist, Dr. Biggers was the founder and head of the art department of Texas Southern University in Houston. The exhibit will contain the professor's lithography along with the work of former students Harvey Johnson, MPH staff member Criner, and photographer Early Hudenall.

Formed in 1979, when three printers pooled their collections of memorabilia, the Museum of Printing History has grown into a world-class collection of the communications arts. The museum is north of the Montrose District and west of downtown at 1324 W. Clay St. Hours of operation are Tuesday through Sunday, 10am-5pm. Admission is $4 for adults, $2 for seniors and children, and free on Thursday. For more information, call 713/522-4652 or go to www.printingmuseum.org.

is celebrated in los dos Laredos honoring the first Western Hemisphere leader to free a New World country from a colonial power. The party takes up both sides of the border, Feb. 3-16. 956/722-0589 or www.wbcaldo.com and www.visitlaredo.com.

Artrain USA, a traveling exhibit of space art by renowned artists, makes a stop in Galveston, Feb. 1-4. 409/765-5700 or mardigrasgalveston.com.

An Evening at the Vineyard