The Style Avatar expounds on the First Family Jewels. 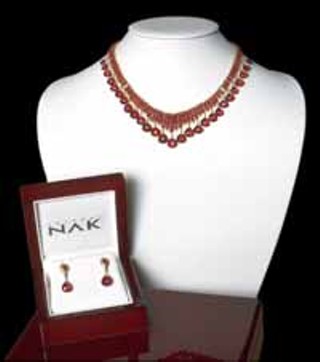 THE BUSH FAMILY JEWELS "You would too go!" "I would not!" "Would too!" And so went the deep philosophical discussion between Gail and I about whether or not we'd attend the Bush Inaugural. She swore that she wouldn't, and I swore she would. I'd definitely be going. Outside of the Academy Awards, it's just about the most glamorous social event the country has to offer. Who cares if some people think that the Bushes are a bunch of imperialistic warmongering charlatans? There were other benefits -- lots of expensive dresses, and, of course, the jewels. Jewelry seems to be regaining its rightful place as the most important thing in the world. Or maybe just in my mind, anyway, since, for some unknown reason, I've spent months studying books about the Duchess of Windsor. Now, there's a babe with a one-track mind; she skipped the ABCs and went directly to the Four Cs (cut, color, clarity, and carat weight).

If you'll recall, we discussed jewelry right before Christmas -- specifically, jewelry by Austin designers Anthony Camargo and David Nakard of Anthony-Nak, and their growing empire, not to mention their growing roster of stellar clients (Dec. 15, 2000). Well, they've added another jewel in their crown, so to speak, by designing six suites of jewelry for the inauguration, including those worn by First Lady Laura Bush and her daughters. "It was an honor," said Nakard. Laura had bought pearls at Anthony-Nak's Christmas Event, and capitalizing on the opportunity, they followed it up with a personal thank you note and small gifts for the Bush daughters. After the confirmation of the election results, they were asked to do the daughters' jewelry. One thing led to another, and they were doing Laura's, too. Based on the sketch of Laura's inaugural gown and the description of it as being "ruby red," the designers put together several possibilities for the First Lady. Directed to the ranch in Crawford, they set off on their mission. "We go through this whole rigmarole of security checkpoints and dogs in the car checking for explosives -- you know how jewelry designers always have pipebombs -- and we get up to the front door, and who opens it? George [W.] Bush," says Nakard, noting that the casual atmosphere of the Bush's temporary quarters featured a typically Texan décor and personal mementos. Dubya was very pleasant and the folksiness went as far as directing the designers to the kitchen to fix their own lunch. All is well, until Laura puts on the dress, and the jewelry designers realize with mounting fear that the jewels they have designed will not work with the dress -- a dress that is not ruby red, but an orangey-red: an unusual color "not found in nature." It became a high-stakes gamble: If the designers wanted to have their creations around the neck of the first lady, they'd have to work fast. Nakard flew to L.A., bought what he prayed would be the right stones, and took the red-eye flight back, where he and Camargo furiously reset the stones for the First Lady's approval the next morning. Success was with them; Mrs. Bush selected one of two necklaces, a magnificent scattering of rubies spread across gold mesh and hung with ruby teardrops. Saturday night, the designers could finally exhale in relief seeing their labor of love splashed across the world media. Perhaps the necklace and other Anthony-Nak jewelry didn't get the coverage of the spectacularly mediocre dress that Michael Faircloth designed, but their jewels went a whole lot further in making Mrs. Bush the stylish figurehead America so richly deserves.

Susan Dell did the daughters' dresses. News from across the parking lot at Vylette boutique says that many of Dell's clients who ordered gowns for the Black Tie & Boots Ball in Washington trekked over to Vylette and ordered their newly fashionable cowboy boots from the made-to-measure service the store offers.

So, did we go to the inauguration after all? Hell, no. We weren't even invited.