From Galveston to Cozumel on a Carnival cruise ship: food, gambling, food, and ruins. 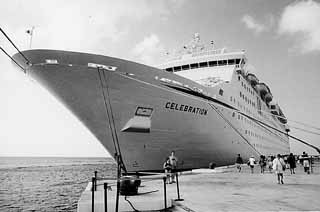 Sea cruises never really sounded much like my cup of tea. Being locked on a ship for more than a day watching Las Vegas-style shows, wearing a suit and tie to dinner, and crowded into small spaces with a bunch of people I didn't know sounded more like a jail sentence than a vacation.

Four days on the Carnival ship Celebration changed my uneducated opinion. My wife, daughter, and I were pleasantly surprised at the amount of fun we had on the inaugural voyage of the four-day cruise from Galveston to Cozumel, Mexico.

The red, white, and blue 733-foot ocean liner sitting next to the new passenger terminal looked gigantic through the windows as we waited in line to make our way to the gangplank. The 13-year-old ship is about in the middle of age and size compared to the other ships in the 15-ship Carnival fleet.

Using Galveston as a home port for cruises to the Yucatan Peninsula can save Texans hundreds of dollars in airfare to ports on the east coast. Four-day weekend cruise fares start around $400 per person and five-day voyages start at $479 per person, both based on double occupancy.

Our cabin was down the narrow hallway from where we entered the ship and seven decks below the morning coffee pot. The room would be tiny in comparison to most hotel rooms, but they put the limited space to good use. We pushed the two twin beds together and folded down one of the two bunk beds on the wall. With the three of us trying to get dressed at the same time it was crowded, but most of the time it wasn't too bad.

The ship's owners don't expect you to spend much time in the cabin, and we didn't. As soon as we dropped our bags in the room we were off to the upper decks. There was lots of railing space to watch the beaches of Galveston Island slowly slip away.

Below deck the decor was mostly red carpet, mirrors, and neon. To say that it had the look of a cheesy hotel lounge would be cruel, but not too far off. As soon as we pulled away from the dock in Galveston the 10 bars and lounges on the ship began doing business worthy of any place on dry land.

Entertainment on the boat was casual and nearly constant. The cruise director, who served as emcee for most of the shows, could better be described as "cruise host." He was the best entertainment on the lineup. During the two days at sea there were dance classes, bingo, organized games and contests, and a gaming seminar.

With my limited experience at gambling, mostly limited to losing, the casino looked fairly large. There was one room full of one-armed bandits and one room with poker, blackjack, and dice tables. Through the gaming seminar I discovered the roulette table, which was a lot of fun, especially if you walk away when you're ahead or have lost your limit.

If there wasn't a lot to do during the day on the ship, the evening meals would have been enough to make it an enjoyable vacation. Our waitstaff was attentive and professional. "We're not stuffy like on some of the other cruise ships," our head waiter said. He and his assistant became as much a part of the meal as our friends sitting around the table and the wonderful food.

It was like eating at a four-star restaurant every night. Each meal was a different menu of four or five appetizers, two salads, and then four or five entrees. This was the time to try something new like pumpkin soup or poached pears. Presentation of the food was often a work of art with sauces decorating the plates like dabs of paint.

Partially from guilt for all of the great food I consumed and partially because of my lack of patience in waiting for one of the six elevators, I took the stairs between decks. There was food available nearly all day, but the activities helped you work off one meal and get ready for the next. The shore excursions could be a workout all to themselves.

By the time I made it to the upper deck for a cup of coffee and the breakfast buffet on the second day we were pulling into Playa del Carmen on the coast of Mexico. The water had turned from a cobalt blue to a light green that almost glowed.

There were 20 different tours offered to the mainland and the island of Cozumel. My wife and I opted for the tour of the ruins at Tulum, while our daughter headed to the beach with friends. There also was horseback riding, scuba diving, snorkeling, shopping, and even a ride aboard a submarine.

The Mayan ruins at Tulum are not the biggest or the best example of the ancient civilization. It was an exciting introduction to the world hidden in the jungles of Mexico with a native guide who made the trip interesting. The remains of the once great city overlooking the pristine beach and the emerald water was awe-inspiring with its great rock temples.

I might not take a cruise again anytime soon -- I still prefer a more independent mode of travel -- but this one changed my opinion of cruise ships.

Hogeye Festival in Elgin offers the fun of cow patty bingo, greased pig contests, street dances, and plenty of the sausage that made Elgin famous, Oct. 28. 512/285-5721.