The summer drought is making historical Indian sites throughout Texas more accesible to archaeologists ... and to looters. 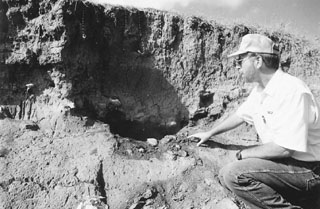 Texas history is being stolen. Antiquities collectors who dig through layers of earth covering prehistoric and historic Indian sites on public land looking for flint tools and projectile points are destroying the story of Texas' past like ripping pages from a history book and scattering them into the wind. The summer's drought is making previously hidden sites accessible as lake levels drop to historic levels.

"It's a double-edged sword," says Dan Prikryl, archaeologist for the Lower Colorado River Authority (LCRA). The low lake levels offer scientists the best chance they've had in decades to study some of the sites. It is also giving looters the same opportunities.

Once these sites are disturbed, there is no way of reconstructing the sequence of events that happened over hundreds of years to these ancient cultures, says Prikryl. Not only are treasure hunters making off with valuable artifacts, but they are also destroying the only records of cultures that left no written record of their existence.

Scientists estimate that about 10,000 years ago, bands of hunter-gatherers wandered the river valleys of Texas following herds of bison and mammoths. Thousands of prehistoric and historic sites are located around Texas with more than 300 sites on LCRA property. Hundreds of these sites on public property statewide have been ruined by history robbers who dig through centuries of stratified layers of dirt and rock looking for flint tools.

"We're not interested in prosecuting someone who finds an arrowhead while walking through a park," Prikryl says. The LCRA is more interested in stopping collectors who maliciously destroy historic sites by digging, he says. The Texas Antiquities Code allows judges to assess fines ranging from $50 and $1,000 and up to 30 days in jail to anyone caught damaging a historical or archaeological site on lands owned by a city, county, or state without a permit. Punishment can be stiffer if serious damage or criminal trespassing charges are added.

On a recent hike through an LCRA preserve on Lake Travis that is closed to the public, Prikryl pointed out a freshly disturbed site in the side of a sharp cut in the landscape. About three feet below the topsoil, the dark brown dirt has a black layer that was possibly an ancient campfire. Normally the lake would have backed up the creek to cover the muddy bank, but with the lake waters more than 37 feet below normal, the site was literally high and dry. Someone had recently dug into the hard dirt looking for arrowheads.

At another site nearby under a stand of oak trees, a pile of flint chips were placed on a rock. Two large holes had been dug around the rock ledge. The chips were pieces that the looters had found, but discarded along with soda bottles and cigarette butts. For scientists, sites like these no longer provide useful information. While the robbers were looking for finely crafted flint tools, they disturbed a timeline of events that could have told archaeologists things as wide-ranging as what the inhabitants ate and what the weather was like a millennia ago. Whoever did the digging here "ruined a potentially very good site," Prikryl says.

Not all of the area's archaeologically rich sites have been destroyed. In 1982, archaeologists with the University of Texas found one of the few complete skeletons of an early American woman. Named Leann, after the nearby town of Leander, it is believed that she lived as long ago as 8,000 years before the building of the Egyptian pyramids. Discovered on private property on the banks of Brushy Creek near RM1431, the site exposed one or two examples of every prehistoric time period in Texas.

Archaeologists need help to catalog and preserve these diminishing resources. "Call us up if you find something or see someone digging," Prikryl says. "Make a contribution." There are ways to put an interest in Texas' past to constructive uses. Prikryl recommends joining an archaeology society or taking a field trip through a Central Texas time capsule at the Nightengale Archaeology Site in Kingsland (830/598-5261) rather than destroying what could be the last remains of an ancient society.

Not only are archaeologists in Texas working against looters, but Mother Nature often destroys or damages the remaining elements of prehistoric peoples. Because the sites are often near waterways, floods and erosion can be particularly damaging.

Prikryl emphasizes the LCRA is not interested in prosecuting the person who happens upon a lucky find of an arrowhead while visiting one of the river authority's 15 parks between Lake Buchanan and the Gulf Coast. Stepped-up surveillance and enforcement on the thousand of acres of preserve land will target skilled looters with shovels and picks.

"Archaeological sites are a finite resource that need to be protected just like the land, water, and trees," Prikryl says. Park rangers cannot cover all 16,000 acres of LCRA land at once, but with the public's help, the looting can be stopped.

If you suspect a site is being disturbed, contact the LCRA Public Safety Department at 800/776-5272x6450. Dan Prikryl divides his time among many different duties as a staff archaeologist, but he is always interested in discussing prehistoric and historic matters and can be reached at 397-6714 or dprikryl@lcra.org. For more information about archaeology in Texas, log on to the Texas Historical Commission at www.thc.state.tx.us.

Grapefest in Grapevine hosts the largest wine festival in Texas with local wineries displaying their wares and vying for honored awards, Sept. 8-10. 800/457-6338.

1900 Storm Centennial Tribute in Galveston commemorates "the Storm of the Century" with a weekend of special guests and events, Sept. 8-10. 888/425-4753 or www.galvestonhistory.org.

Hummer/Bird Celebration in Rockport notes the amazing natural phenomenon of the migration of thousands of ruby-throated hummingbirds through the area en route to Mexico and Central America, Sept. 14-17. 800/242-0071.