"Public Notice" gets devout all over the sisters. Check it out: Two nun-related items in one week! 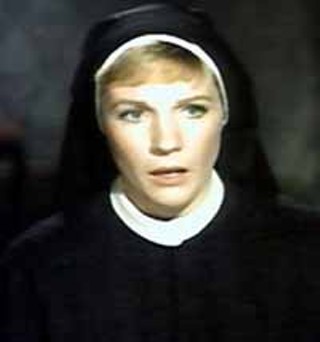 Sister Maria sez, "A Sound of Music Sing-Along??? Well, that is one of my favorite things!"

Geeeeeeez... How many times did we hear that while we were growing up? Back in our day, nuns were foreboding yet benevolent, imposing yet graceful, visions of faith manifest. Depending on the "order," or nun crew, their "habits," or nun duds, ranged from stark, white, bride of Christ gowns to ominous black-and-white robes that made a very distinct and harrowing "swoooosh" sound when charging down a Catholic school hallway. We remember all the stuff of nun lore, as we witnessed it firsthand at such a tender age. We witnessed the "ruler to the knuckles" trick and can still recite random New Testament verses about our gentle Jesus as clear as we can the lyrics to that catchy tune "Get Together" (... you know, "C'mon people, smile on your brother..." -- folk mass, don't ask).

While Second Ecumenical liberalism was quickly changing the role of our beloved sisters, they remained an important, albeit mysterious, part of our not-at-all-miserable youth. Nuns, in fact, are as much a part of our Seventies iconographic landscape as smiley faces, Lemon Frog jeans, and Bacardi 151. So you know how upset we were when we realized that we missed, totally missed, the big screen showing last weekend of The Sound of Music (or, as it is called by our amigos south of the border in Mexico, The Rebel Novice Nun). Talk about your major life influences! TSOM (or TRNN) is loaded with 'em: Catholic family values, escaping the Nazi plague, drapery as fashion (Let's not even talk about the lederhosen!!! Omigod, lederhosen!!!!), and dripping novices ... You get the picture. We are so smitten. Well, just as we were saddened to learn that we missed the Paramount Summer Classics TSOM showings, so we were thrilled to remember that in just a few short weeks, the Austin Gay & Lesbian International Film Festival along with the fine folk from Project Transitions are presenting (now, hang on to your jumpers) a Sound of Music Sing-Along at the Paramount Theatre later this month! And that's not all. Charmaine Carr (Omigod! Charmaine Carr!!!) who played Leisel in the original 20th Century Fox masterpiece will be on hand to help out with the weekend's events. This all happens on Sat, Jul 29. Stay tuned, o devoted ones! 454-8646.