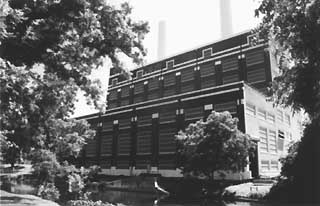 A new life for an old landmark (Photo By Gerald E. McLeod)

The Comal Power Plant in New Braunfels could have been torn down. The two white smokestacks towering over the red brick building at the southern entrance of Landa Park have been a part of the town's skyline since 1926. Unused since 1973, a six-year project currently under way will turn what was considered a liability by many into a luxury hotel on the banks of the Comal River.

"It's a building that doesn't want to become a hotel," Jeff Singleton says with a laugh. He's the project manager for the Lower Colorado River Authority (LCRA), who helped negotiated a deal with investors that saved the building. For the last two years, the quasi-state government agency has been dismantling tons of antiquated electrical generating equipment, stripping lead-based paint, and removing hazardous asbestos insulation. Once the largest power plant west of the Mississippi, the electric factory has been reduced to its steel girder skeleton and red brick hull at a cost of around $11 million.

"They didn't have to go to this effort," Morgan Hill, the managing partner of the group of investors, says of the LCRA. Most electrical generating facilities of the Comal Power Plant's generation have been boarded up or demolished. "It's very commendable that they would go to the expense to save a building with such historical and local value," Hill says.

"It would have been cheaper to raze the building and build a new building," Hill says. The Houston resident has done several restoration projects in his hometown and is currently remodeling a hotel in Bryan. He has also worked on restoring historical buildings in Tulsa, Okla., and St. Louis, Mo.

In the past five years, condos in historical buildings have given new life to Houston's central business district. "You have to get people back to the city centers, even if it is just for a night at a time," Hill says. From there other businesses will follow, offering services ranging from transportation to restaurants.

New Braunfels seems to be the perfect place for additional hospitality facilities. Located between two of the biggest tourist attractions in Texas, the Alamo in San Antonio and the Outlet Mall in San Marcos, the town already has the most popular water recreation district in the state -- the Guadalupe River. A hotel of the kind envisioned by the LCRA and Hill will make New Braunfels a destination instead of a side trip.

Although there are currently only architectural sketches, plans call for 120 rooms in the main building and 40 more in cottages on the 28 acres along the river across from Wurstfest Grounds. Landa Park already has a golf course, two swimming pools, and river tubing to attract visitors. Schlitterbahn Water Park and the historic business district are a short walk or shuttle ride away.

When the construction of the hotel is completed sometime around 2003, the building will look the same and yet be radically different. From the outside it will retain the same basic appearance, including the LCRA sign on the southern roof and the two white smokestacks. On the inside it will maintain an industrial look with an elegant feel. The turbine room will be turned into a grand ballroom with the 75-ton hook and hoist still in place.

Because the building was constructed around coal handling equipment, boilers, and furnaces that stretch nearly the full 110-foot height from floor to ceiling, there are few floors for rooms. Also complicating the new construction is that the building went up in three sections, each with a different base line. Construction of the hotel will cost around $28 million.

"This is not a remodeling job," Singleton says, "It's a remediation. We're turning a liability into an asset for the LCRA, New Braunfels, and the state of Texas."

In its 47 years of service the Comal Power Plant contributed substantially to the development of Central Texas. When it was built, less than 2% of Texas farms had electricity. At one time it was the main electric generating plant for San Antonio and helped that city attracted its military bases. By the time it closed, all of its 60,000 kWh of production were used by New Braunfels.

The site of the power plant is on a canal dug by slave labor that rerouted the Comal River. Fed by Comal Springs, the largest natural springs in Texas, the 70-degree water was ideal for cooling the condensers.

Originally the plant was built to burn lignite coal that boiled the water to produce steam that drove the giant turbines connected to the generators. In 1926, the cost of a ton of lignite coal was 37 cents a ton and a $1 a ton to move it from Rockdale to New Braunfels by train. Almost immediately environmental problems began to arise.

Properly disposing of the slag from the furnaces was one concern, but the architects didn't seem to expect the contamination caused by the fly ash containing sulfuric acid that escaped through the smokestacks and rained down on area farms.

Three years after the plant was opened, it converted to natural gas. It was skyrocketing fuel prices in the 1970s that spelled the end of the power plant. It simply had become too expensive to operate.

When the new hotel opens, there will be reminders of the building's former life. Photographs on the walls will show how the place used to look. Some of the large brass gauges and heavy equipment will be incorporated into the decor. A rooftop restaurant will look out over Landa Park and the twinkling lights of New Braunfels -- lights that once relied on the Comal Power Plant for their energy.

Flying With the Freetails at Old Tunnel Wildlife Management Area southeast of Fredericksburg offers biologist-led observations of the bat emergence from the abandoned railroad tunnel, Thursdays and Saturdays through the summer. 830/644-2478.