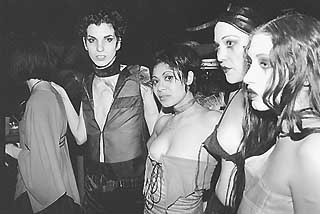 GIMME AN "F" Fashion, fantasy, and fetish ruled the runway at the Atomic Cafe's Fashion Show on April 18. Though there was no visible hostility emanating from the bouncers, the most treacherous part was trying to make your way through the club in the dark. With unexpected steps here and there, I don't know how all the folks in platform shoes stayed on their feet. When I realized, complete with goosebumps, that I was in what was the old Austin Country, I immediately remembered falling off of my platform shoes there -- and that, my little chickens, was a very long time ago. My favorite part of the show was the VIP seating area. All fashion show producers in Austin should have a VIP seating section (or at least three or four chairs set aside for me and my companions). The show is the debut of Neil Diaz, PR/promoter. He is gracious and sweet, and put on a hell of a show; you didn't have to even like the clothes to appreciate the immense amount of work involved. Let's hope we see more of Mr. Diaz's productions. For a production that was reportedly in shambles that afternoon, it came off relatively problem-free, at least from the audience's point of view. It was another show that was an hour-and-a-half long -- and this is not a bad thing. Fashion shows that concentrate strictly on the clothes can be over and done with in 20 minutes. But as long as you're going out, specifically for the event, it might as well be an evening's worth of entertainment. So a fashion show that's an hour-and-a-half long needs to be pretty entertaining. And this one was.

Buffalo Exchange showed many variations on a single theme: layers of mismatched clothes with a waist-cincher on top of it all. They were the first of all the participants to utilize an Asian theme, and they actually had a number of very nice pieces that were hard to detect because the outfits had way too much going on. The male models all wound up looking like Frankenstein, but the make-up on several of the female models was ethereally beautiful.

And now, we have to talk about Levi Palmer aka Leviticus. Heralded as the "Second Coming" in fashion, Palmer needs many things. Among them are, in no particular order, a patternmaker, a samplemaker, and a larger fabric budget. But it would be inaccurate to call him a rank amateur. He is, in fact, an incredibly creative designer with an excellent sense of line and drama, whose clothes suffer because of poor technical skills. His love of his work is evident, and, ideally, he'll overcome these temporary difficulties and will fulfill his potential -- which is vast. Utilizing a great deal of lining fabric and burlap (Mr. Palmer, are you friends with Bert Marckwardt?), the women's wear was a little rough, but Palmer doesn't seem to delineate much between menswear and women's wear. Perhaps that's part of the appeal, but the dresses that fit so smoothly on the male model (mon dieu, did that queen have attitude!) would probably not fit a real woman very well. But when Palmer finds his particular niche, we may see wondrous things from him. With a very vocal fan club in attendance, Palmer had every reason be proud of the show, and, hopefully, found it to be a great learning experience as well.

The folks at Forbidden Fruit are pros at doing these shows. They presented their wares in Five Acts of Fashion Faux Pas and Atrocities, including an act which "poke[d] fun at the 'L.A. Rocker Phenomena' that occurred at SXSW this year." Slick and sexy, and always entertaining, the vignettes showcase Forbidden Fruit's world-class collection of fetish wear.

The theme of the whole show seemed to be Vivienne Westwood, circa 1980. The only problem is that the looks we saw onstage and off were cutting-edge back then. The mystery is that somehow the black-leather/punk look is still cutting-edge 20 years later. So when the nouvelle fashionistas yawn and say they're sooo tired of black, it appears they'll just have to get over it. It's not going anywhere, and will forever be the uniform of the universally hip.