The bluebonnet might be the state flower of Texas, but it's iris fields forever at the Rainbow Iris Farm outside of Schwertner. 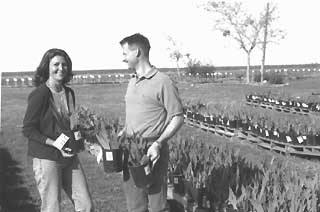 The Rainbow Iris Farm grows what may be the perfect flower for Texas. The modern iris, or bearded iris as it is called by horticulturists, is drought-resistant, low-maintenance, and evergreen. Few other imported flowers are as well-prepared to survive the capricious Texas weather.

These aren't your grandmother's irises. Although the modern iris, developed since the 1960s, has a lot in common with the dagger-leafed plants that survive unattended in a forgotten patch next to your old aunt's house, the new breed is a heartier lot. Named for the goddess of the rainbow, the iris truly comes in a rainbow of colors.

Bearded irises are named for a fuzzy appendage attached to the base of the fall petal of the bloom. The variety has the characteristic of being taller than the older common varieties of irises. The blooms tend to last longer and while the blooms of the older varieties are about the size of a baseball, the modern iris flowers can be as large as a softball.

The grandma varieties tend to be more tolerant of shaded areas, while the moderns love a good sunny spot. Both prefer a dry, well-drained location. The moderns tend to extend the blooming season past the traditional early spring period. They also come in three varieties: early, mid, and late bloomers. By mixing varieties, a garden can have blooms from March through June, and longer.

With the introduction of the modern hybrid varieties, the rainbow of colors has increased to almost every shade imaginable from a velvet black to a snow white with gold. The names of the varieties are almost as colorful as the blooms themselves. Names like April in Paris, Honky Tonk Blues, Grape Adventure, and Unforgettable Fire conjure images of spectacular spring color. There must be some old rock & rollers in the business of developing new breeds because some of the newer varieties have names like Sugar Magnolia, Stairway to Heaven, Velvet Underground, Good Vibration, and Wild Thing.

Cross-pollination of the iris no longer can be left to nature because the blooms are so large, the bees can't get into the inner portions of the plant. Inside the bloom are the male and female sex organs. Horticulturists have to gently remove the stamen and rub it across the style crest of another plant to exchange genes. This provides a more consistent variety of blooms on a plant that is otherwise undistinguishable from other types of irises. It can take as long as three years before a hybridizer knows whether the blooms are what he wants.

Cliff and Rita Snyder discovered the wonders of irises when he cleaned out a flowerbed at her grandmother's farm up the road from their Rainbow Iris Farm outside of Schwertner. Rather than throw away the extra plants, they sold the irises to a local nursery. The couple also wanted to supplement the garden with some new plants.

It was then that the couple discovered two things: There was a market for irises, and that there were thousands of different kinds of the plants to choose from. Cliff began experimenting with different kinds of irises to find what grew best in Central Texas. Soon the flowers were multiplying faster than he knew what to do with them. "It's a hobby gone out of control," Cliff says with a laugh and Rita heartily agrees.

But both are children of the earth, having been raised in the fertile rolling hills north of Georgetown. Nothing suits them better than being able to raise their two children surrounded by the wheat fields and cow pastures. Since the flower business has taken off in the last three years, Rita has neglected her job as a real estate agent to concentrate on taking care of the Internet and mail orders. "My husband is responsible for this," she says with mock chagrin. Cliff has kept his job as financial officer for a Georgetown gas company.

Maintaining and harvesting irises is backbreaking work. There is very little machinery to help with the planting and harvesting. That's why the four or five iris farms in Texas all tend to be of five acres or less.

The Snyders have 75 acres around their new home, but only four acres are planted with iris bulbs. At the height of the summer heat around the end of August or first of September, Cliff and a crew of hired hands work their way down the long rows of iris clumps. After digging up the plants, the "babies" are cut off from the center rhizome or root. The larger ones are separated for sale while the smaller ones are saved for next year's crop. Besides a thriving retail business, the Snyders also sell wholesale to local nurseries.

Out of the approximately 3,500 varieties of irises, the Rainbow Iris Farm sells around 200 different kinds. Most of the plants retail for around $4, with newer and rarer varieties going for as high as $30. Cliff is always experimenting with about 25 different new varieties looking for the next big thing in iris culture.

The Snyders will be showing off the colorful blooms at the farm's annual Bloom Fest April 15 and 29. There are special programs and entertainment all day to add to the excitement of a visit to the farm.

The Rainbow Iris Farm is about 45 minutes north of Austin. The Snyders welcome visitors between March 15 and Sept. 20. Although someone is at the farm most of the time, it is best to call and make an appointment before making the drive. For information, call 254/527-4000 or check out their Web site at http://rainbow.farms.net.

Wildflower Tours in Washington County are aided by a free map and guide from the visitor's bureau, 888/273-6426. 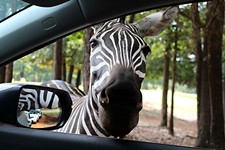