Black for every budget at South Lamar boutique Blackmail. 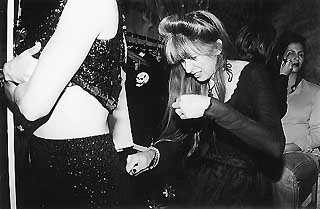 LOOK BROODING, JADED, AND FIVE POUNDS THINNER. Black. Basic black. Black as night. Black as death. Dangerous, dramatic, and seductive, or staid, sedate, and chic, it's always glorious. And there is no other real choice. If you want to make the maximum impact, it's black. There are no "new blacks." Espresso, midnight, or stone will never replace it. There is only black. And for the best black, there is only Blackmail (2040 South Lamar). It's all there, and it's all black. If you're a vintage fanatic, prepare to drop dead over the evening gowns, cocktail dresses, cowboy shirts, tuxedos, and leather jackets. And if it's new, cutting edge designs from smaller, more creative companies, you'll expire over the frock coats, evening skirts, hosiery, and jewelry. Or perhaps you've decided you want to start your new baby out on the right track by skipping the Barney T-shirts and proceeding directly into all black. But if you had something else in mind -- say, a one-of-a-kind, absolutely killer black dress with romantic elements of a favorite Victorian style, but updated, perhaps, with the fabric handled in the manner of someone like Yohji Yamamoto or even Gaultier, but with the kinds of details that you've seen only in your dreams -- then Blackmail is the place.

In an enclave of stylish establishments such as Neon Jungle, Ivory Aisles, Amelia's RetroVogue, and Lo and Behold Antiques on South Lamar, Blackmail proprietress Gail Chovan has created a distinct fashion niche for herself in a town that, with the exception of a very small handful of daring retailers and designers, has completely missed the fashion boat. Whether it's the ones who swear "I'm just too busy to care about fashion," to the ones who feel that a pair of Wranglers and a Lynyrd Skynyrd T-shirt will see them from day into evening perfectly, retailers must be vigilant and take it upon themselves to set a good example. But, fortunately, there's always a certain segment of the population that refuses to be spoon-fed the mass-market schlock. And thank God for them. From the ones who can afford to buy something unusual, to the ones who scrounge together pieces from here and there to create their look, Blackmail has offerings for every budget, with particularly affordable vintage wear. The shop has an edge in an arena swimming with beautiful vintage by offering an exciting mix of vintage and new, with the increasingly important addition of Chovan's own designs.

With flowing hair and startlingly elegant attire, Miss Chovan treads a fine line between high style and the avant garde in her approach, but with the kind of utter assurance that is essential in making any look work. Her personal and professional image defy categorization and impose no constraints on herself or on the merchandise that she offers -- except that it be black, of course. Okay, okay, I did see some romantic, snowy white men's shirts with jabots and pirate sleeves, and there was a pair of red cowboy boots, and there was a gray skirt -- but other than that, well, you guessed it. Though one may be surprised to find that Miss Chovan is not a Goth high priestess, nor does she sacrifice animals and sleep in a coffin, in dedicating herself to black she has chosen a relatively simple and time-honored way to make her mark. And we can look forward to that mark expanding as she concentrates her attentions on enlarging her selling space to include an atelier on the premises where her own designs will be produced and featured more prominently. With her residence attached to the shop, she avails herself of the luxury of having the shop at her fingertips whenever the inspiration strikes. It is an approach to work that is particularly dear to Miss Chovan, who is married to Evan Voyles of the Neon Jungle. With dozens of irons in the fire, the Chovan/Voyles alliance forms the foundation of what may become a creative empire. Watch for her at Club DeVille's Spring Fashion Show (TBA), or better yet, go see her now. Dial DAnger6-7670. You'll be glad you did.