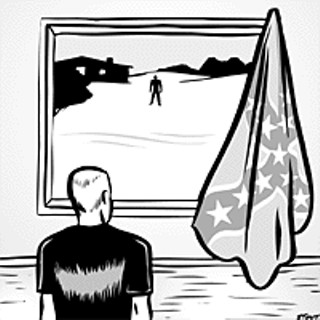 Last October, an angry reader challenged my statement that during the first half of the 20th century an African-American man was lynched in the South at the rate of roughly one every three days. Now that the Confederate flag is again an issue in American politics, and with Republican presidential hopefuls George W. Bush and John McCain both unwilling to stand against its official display, it is time to answer that reader's challenge and to face what the Confederate flag really stands for. The South did not keep official records of its lynchings, but others, like the Tuskeegee Institute and The Chicago Tribune, tried to. Figures vary, but on January 13, 2000, The New York Times quoted the following, which is one of the lower estimates that I've seen: "Between 1882 and 1968, an estimated 4,742 blacks met their deaths at the hands of lynch mobs." Do the gruesome math: 86 years times 365 days divided by 4,742 equals 6.6 -- or roughly one lynched black person per week. However, this is a skewed figure, because few were lynched after 1955, for the nation had grown eyes (television cameras) and its eyes were focused on the South by the Montgomery bus boycott and the movement that followed. So revise the figures to 1955: 73 years times 365 divided by, say, 4,700 -- which averages to about one lynched human being every five and a half days, or 5 or 6 a month. Such figures should make any decent person furious, but the fury that many white Southerners still feel, when faced with these facts, is one of raging denial. At least two states still sanction the flag that symbolically flew over these atrocities: South Carolina flies it on its statehouse; Texas displays it on plaques in its Supreme Court; worse, Texas allows the Confederate flag displayed in many public schools, though it should be obvious that no children of color should be compelled to receive their education under the banner of their ancestors' murder and enslavement.

Lynchings weren't always backroad affairs carried out by a crazed few; many African-Americans were lynched right in the center of town before large crowds -- a fact for which there is ample photographic evidence, as can be seen in a new book by James Allen, Without Sanctuary: Lynching Photography in America. These pages are mostly reproductions of postcards. Yes, postcards -- for the communities that perpetrated these horrors were proud of them and wanted distant friends and families to see. Roberta Smith, in the Times: "What takes the breath away is the sight of all the white people, maskless, milling about, looking straight into the camera as if they had nothing to be ashamed of, often smiling. Sometimes they line up in orderly fashion, as if they were at a class reunion or church picnic. Sometimes they cluster around the victim, hoisting children on their shoulders so that they can see too." Anyone who doesn't find this fully as horrible as the Nazi atrocities is living in a moral vacuum.

But a moral vacuum is what one often encounters when speaking to white Southerners about their history and their war flag. The Civil War may have ended 135 years ago, but the propaganda justifying that war is still so virulent that good, intelligent, generous people will still parrot that the war and the Confederate flag were and are not about racism and slavery but about "states rights," though the only "state right" in contention was the right to own slaves.

The facts are these: In 1860, Abraham Lincoln was elected on a platform stating that, while slavery would be allowed to continue in the South, any territory in the West that wanted statehood must be slave-free. The slave states were afraid that under Lincoln's policy free states would outnumber them in Congress and would eventually abolish slavery. So the Southern states seceded. Their purpose was the defense of slavery; "states rights" was merely the excuse. In 1861, this was admitted by no less a Confederate than Jefferson Davis' vice president, Alexander Stevens, who said: "Our new government is founded upon the great truth that the Negro is not equal to the white man."

Why was the "states rights" canard politically necessary? The leaders of the Confederacy knew the technological and numerical superiority of the North, and knew they could only win with the recognition and aid of England and/or France, who might have an interest in stymieing the growth of Northern power. But those countries had outlawed slavery decades before, and were not likely to consider a slave state worthy of recognition. The "states rights" concept was a ploy to win European approval on, as it were, a technicality. It failed.

The oft-resorted-to statement that "most white Southerners didn't own slaves" is only a way of saying that most white Southerners weren't wealthy and didn't control the Southern economy. But the health of the Southern economy depended upon cotton, which in turn depended upon slavery. Most white Southerners didn't own slaves, but all depended for their prosperity upon the wealth that slavery created. The white South was fighting for its economic system, a slave system, so in fact the Confederacy was defending nothing but slavery, whether an individual Confederate owned slaves or not. The proof of this is that for the century following the Civil War the entire white South kept African-Americans in bondage through viciously enforced Jim Crow laws in order to keep essentially the same economic system in place. There would have been no need to do that if the war had been merely about "states rights." Which is why we don't hear about states rights again as an American political issue until the 1950s when the South once again bleated about states rights in defense of segregation.

The moral vacuum that still curses the South is evident in its treatment of those whom it chooses to call heroes. For instance, Nathan Bedford Forrest was a slave trader before the war -- the lowest moral degradation to which a human being can descend. He was certainly the most brilliant cavalry commander of the era; he was also a war criminal. At the battle of Fort Pillow, his troops shot and bayoneted 300 black Union soldiers who were trying to surrender. Forrest said: "It is hoped that these facts will demonstrate to the Northern people that nigra soldiers can't cope with Southerners." After the war Forrest became the first Imperial Wizard of the Klu Klux Klan. This information isn't recorded on his statues.

Or take that sacred cow of the Confederacy, Robert E. Lee -- a brilliant general, he was also a hypocrite whose brand of hypocrisy was particularly vile. Before the war he was said to disapprove of slavery, yet, like Thomas Jefferson, he didn't free his slaves -- i.e., his money was more important to him than his morality. When Lee invaded Maryland in 1863 he ordered all free blacks shipped back to the South as slaves. Where was his disapproval of slavery then; and what had such a decision to do with states rights? When Confederates massacred black Union troops who were trying to surrender, Ulysses S. Grant demanded that black soldiers must be treated like whites or he would cancel the practice of prisoner exchanges that until then had been one of the rules of North-South engagement. Lee refused. Lee sunk deeper into the depths of hypocrisy when, early in 1865, with the South losing badly, he petitioned the Confederate Congress that slaves be allowed to serve in his army. The carrot was that any slave who fought for the South would be freed after the war. The Confederate Congress, in an act so barren of pride and consistency that "hypocrisy" hardly suffices to describe it, passed a law approving Lee's request. One Confederate senator, Howell Cobb of Georgia, was honest enough to state, "If slaves seem good soldiers, then our whole theory of slavery is wrong."

Another fact that Southern mythmakers have obscured is that there were many white Southerners who, to their great honor, refused to defend slavery and fought against it. Ken Burns, The Civil War: "In North Carolina, the pro-Union Heroes of America had more than 10,000 members. By the end of the war Unionists from every Southern state, except South Carolina, had sent regiments to the North." This proves that the defense of slavery was not an automatic or inevitable response for Southern whites. So those who chose to defend slavery must answer for their acts in the judgment of history.

Can Americans truly transcend our institutional racism if the white South doesn't discard its self-serving myths and face its history? I doubt it. That's why it's so important that the flags come down and the myths be shattered. That such a mass cultural transformation is possible has been proven by post-war Germany, which has rejoined the more-or-less civilized nations by facing and rejecting the demons of its past. Until the South rejects its "rebel" hypocrisy, white Southerners must bear this disgrace: that the descendants of the Nazis have lived a greater honesty, have more deeply atoned for their crimes, and have displayed incomparably more moral courage, than the descendants of the Confederates.